What according to you a defamation is?

Generally, it is estimated that when someone makes any statement either orally or by written words which can harm your repute in the perception of others it falls under the ambit of defamation, but is it really a correct? The answer is a big ‘NO’. 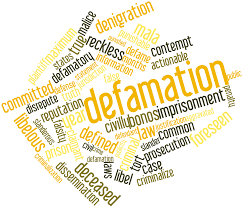 Now, you must be wondering what’s wrong in the abovementioned criteria of defining defamation. Let me tell you, nevertheless the above definition is only partially true because an injury to reputation is defamation; as the title also suggests but the impugned words must qualify another essential condition also i.e. it should be ‘false’. As any statement alleged to be defamatory, when is actually true fails to qualify the criteria for defamation in the eyes of law.

When a false statement either written or spoken, is deliberately presented as a fact which in turn causes injury or damage to a person’s reputation or decreases his respect in the eyes of others. For example, “A accuses B in front of public by saying that he’s a murderer.” If this is untrue then it is defamation. The person whose character has been injured by the false statement can institute a defamation lawsuit.

Our Indian Constitution grants various freedoms to its citizens. Article 19(1)(a) gives us the freedom of speech and expression i.e. we can speak wherever and whatever we want. However, this freedom is up to some extent reasonably restricted under Article 19(2) and defamation is also a restriction upon this guaranteed freedom.
There are certain essential conditions that must be fulfilled to constitute a case of defamation;

It is of two kinds and they are given below;

Nature of this offence:

Defamation can be an offence both under Civil and Criminal law. One may book another for this kind of offence if he wants to merely claim damages, under civil law to be specific under the Law of Torts. Nevertheless, he also has the option of instituting a criminal case under section 499 of Indian Penal Code,1860 in which he can be punished according to section 500 with imprisonment upto two years, or with fine, or both.

In civil defamation a person who is defamed can go to the court seeking damages in the form of monetary compensation. There is no punishment in the form of sentence.

Libel and slander both are criminal offences under Section 499 and 500 of Indian Penal Code therefore, the aggrieved person can file a criminal case against the person who made such defamatory statement.
Section 499 of the Indian Penal Code, 1860 defines defamation and its exceptions too.
Persons who make defamatory statements are exempted from punishments if they fall under one of the ten exceptions provided in section 499.

The exceptions are sought forth below: –

Indian Courts have seen a wide range of defamation cases. Of which, the following are certain landmark cases;
M.K. Prabhakaran and Anr Vs T.E. Gangadharan and Anr[ii], the Kerela High Court has held that once a statement has been filed in a court of law, that statement can be taken as published and if such a statement amounts to per se defamatory, it is the duty of the accused to establish that the statement s falls under one or any of the exceptions to section 499 IPC.

Subramanian Swamy Vs Union of India[iii], the Hon’ble Supreme Court has upheld the constitutional validity of section 499 and section 500 of IPC and section 199 of CrPc.
D.P.Choudhary vs. Manjulatha[iv], In this case a publication was made in the local newspaper, that the plaintiff a 17 year old college girl eloped with a boy by making excuse of going to take lectures. This false news item had adverse effects on her and ruined her marriage. It was actionable per se and she was awarded damages of Rs.10,000/- by way of general damages.
Ram Jethmalani vs. Subramanian Swamy[v], the court held Dr. Swamy guilty for defaming Mr. Ram Jetmalani by saying that he received money from a banned organization to protect the then Chief Minister of Tamil Nadu from the case of assassination of Rajiv Gandhi.