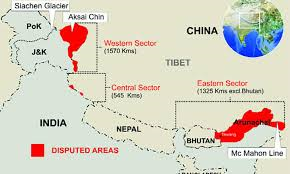 The region of Ladakh is especially a very complex, with some uncommon features. There is Aksai Chin, a territory that India has claimed from long time but China has occupied it. China began building a road through the area in the year 1956 (linking Tibet to Xinjiang) and has occupied it since 1962. Studying, surveying and mapping the region’s terrain is historically proved immensely challenging. The history of the Ladakh region points out how colonial-era has made efforts to survey this area using natural features such as catchment areas as a focal point did not always align with cartographic needs for precision, and importantly, for the idea of where a country’s territory begins and ends. There is also a territory that Pakistan has surrender to China in 1963.

Both the countries troops have patrolled this region for decades, as the contested 2,200 mile border is a long-standing subject for challenging claims and tensions which includes a brief war in the year 1962 between India-China. The border or the Line of Actual Control, is not demarcated, and India and China are having different ideas of where it should be located, leading with the regular border “transgressions.”

The Indian and international media has covered a broad range in their explanation that, China was unhappy with India’s action for ending Jammu and Kashmir’s traditional autonomy in August 2019, one outcome of which was the creation of the Union Territory of Ladakh. China saw India’s recent road construction work in the area as a modification to the status quo and a challenge to its strategic position; China dislikes that India is drawing closer to the United States and its allies in Asia; China seeks to divert attention from its part in the global pandemic; and the straight appraisal that India’s growing military imbalance with China, and China’s “political will” to place its might under President Xi Jinping, is the real difference.

What is the history of dispute?

India and China has fought a war in 1962 over their contested border in the Himalayas. The war ended with a truce and the formation of a “de facto” boundary, known as the Line of Actual Control (LAC). There has been a tense and fragile peace since, punctuated by conflicts on the border, including in the year 2013 & 2017.

There has been no official border ever been mediated, the region where the fights occurred is the hostile terrain at the high altitude and less populated, running through the Ladakh region bordering Tibet. It is home for the Buddhist-majority population. It is a very popular tourist destination.

What is the Line of Actual Control?

According to Indian Media: The Line of Actual Control (LAC) is a rough division line that separates Indian-controlled territory from Chinese-controlled territory. The exact location of sections of the line is particularly in the western Ladakh region and always have remained in dispute. Endeavour between these two countries to clarify the LAC have stopped in the past two decades.

In the few past week, fighting between Chinese and Indian soldiers on disputed western Himalayan borders has left 20 Indian soldiers dead and 20 seriously injured and an unknown number of Chinese fatalities. The conflict was triggered by the roads which are near the border and possibly dams. All these projects further emphasize delicate and globally significant high altitude environments.

Mainly the commentary over the disputes have the focus on China’s growing foreign policy assertiveness and the long standing nature of the dispute. But the clash should also came into the question, the essential of territorializing these breakable and isolated environments.

The clash on the night of June 15-16 has marked the first time that soldiers have died in a battle between China and India in the past 40 years. But during this time these are not the only soldiers or their support staff who have died in this region. China, India and Pakistan have been arguing over the western Himalaya region for nearly 70 years. During this time, thousands of soldiers have died and remarkable damage has been done to the fragile environment which include the glaciers that sit at the headwaters of the Indus, Brahmaputra and Tarim River Basins.

To end the conflict it is necessary to have a non-territorial approaches, which can manage the environment and better serve Indigenous peoples.

In their territorial counterclaims, China and India accuse each other for trespassing on land or enacting “colonial-era borders”. But historical sources indicate that the idea of a lineal border, drawn from peak to summit through high-altitude areas, was a colonial invention in itself.

What next?
India and China are the two populous nation in the world and both have nuclear power. The reaction in Indian citizens to Chinese advances has been one of indignation, with citizens and trade associations calling for the Prime Minister, Narendra Modi-led government to boycott Chinese goods. The burning of Chinese flags and products are done by the protesters across the whole country, while videos on social media showing that teenagers are also destroying their Chinese-made mobile phones.

Beijing is one of the India’s biggest trading partner, with the annual bilateral trade worth $92bn. The trade imbalance between the two is notable, and it will favors China heavily.

India should go through Quadrilateral Security Dialogue which is also known as Quad- an informal strategic assembly that includes countries i.e. India, Japan, Australia and the United States. It will help India to take on China. If the USA makes sound in favor of India and strengthens the Quad, it will send a message to China that we will take aggressive steps and we will also defend our interest.

Meanwhile, both country’s armies are also talking on the LAC to defuse the tensions and make everything normal. And both country’s government are working on it by arranging meeting with each other and also by taking formal as well as necessary step which favors both the countries.

Finally, the border conflict will clarify for India’s foreign policy planners that its preferred format is “the world is one family”, it derived from a Sanskrit saying- it does not apply to all its bilateral connections, unless the elucidation of “one family” includes family members working against India’s national interests. After getting this comprehension, India may begin to make more choices before making its partnerships, and also recognizing that it is not possible to keep equal ties with all indefinitely.
Image Credits https://images.app.goo.gl/29V8b7Cmta3JbUQP9