The term “environment” has a wide spectrum of meanings, definitions, and interpretations. The natural environment encompasses all living and non-living things, occurring naturally.[i] This environment encompasses the interaction of all living species, climate, weather, and natural resources that affect human survival and economic activity [1]. But the man is slowly forgetting his duty to protect the environment. In-spite of taking care of the environment, the man keeps on polluting it, which harms none other than the man himself. 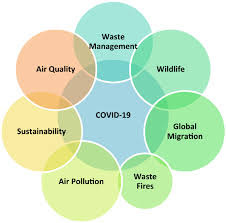 “Environmental pollution is not only humanity’s treason to humanity but also a treason to all other living creatures on earth!”  -Mehment Murat Ildan, Turkish writer.

The Covid-19 has drastically affected the human race all across the world, but on the other hand, it had a significant impact on the global environment. Although the measures taken to control the escalation of the Covid-19 has led to an economic downturn, the decline in human activities has appeared to have a positive impact on the environment. There is no doubt that it has influenced our day-to-day lives altogether, but it has also given the environment the time to regain its health. Along with the benefits, there are some detriments that resulted due to this pandemic.
This blog discusses the positive as well as the negative impact of the Covid-19 on the environment.

RISE OF THE COVID-19

Coronaviruses (CoV) are a large family of viruses that cause illnesses ranging from the common cold to more severe diseases [2]. On 7th January 2020, a novel coronavirus (nCoV) was identified and it was named “2019-nCoV” temporarily. It was later named the “Covid-19 virus”. The first breakout of the Covid-19 had appeared towards the end of December 2019, in the Hunan seafood market of Wuhan city in China. World Health Organisation announced the disease as a pandemic on 11 March 2020 [3]. It is a contagious disease caused by Severe Acute Respiratory Syndrome Coronavirus-2 (SARS-CoV-2). Its origin is still unknown but it spreads rapidly between humans. A few animals have also been infected with this disease. The transmission mainly occurs through direct contact or droplets released by coughing and sneezing. As of December 14, 2020, the disease has spread over 218 countries, with the death of 1,630,579 humans from 73,292,371 confirmed cases [4].

IMPACT OF THE COVID-19 ON THE ENVIRONMENT

Since many countries went into lockdown, observing self-quarantine and social distancing, it gave the environment a “healing time” with minimum human involvement in the natural environment. The confined interaction of humans with the environment has emerged as a blessing for nature. The pandemic has led to a socio-economic disturbance on a worldwide level, which directly or indirectly has affected nature. Some of these impacts are discussed below.

Millions of people have been in confinement but the environment has benefitted from their absence. There is an improvement in the air and water quality, reduction in the noise level, and restoration of the ecology.

a. Improvement in the air quality

Around 7 million people die every year from exposure to fine particles in polluted air [5]. In these last few months, there has been a notable improvement in air quality. During the lockdown, people traveled less, whether it was by road transports or by air transports. The industries were also closed down. This in turn led to the reduction in air pollution due to the decline in nitrous oxide emission. Significant reductions in the levels of nitrogen dioxide have been recorded in countries like China and Northern Italy.

In India, a significant improvement in the air quality was seen in the city of New Delhi. As per the Air Quality Index (AQI) [6], the habitual air quality of Delhi used to be around 200, which signifies a level of unhealthiness in the air. But due to the lockdown observed in India, there was hardly any movement in the city which resulted in the AQI level falling below 20. In Bangalore, the level of pollution was reduced by approximately 40% during the period of lockdown [7]. Along with Bangalore and Delhi, Chennai, Mumbai, and Kolkata have also seen a drastic fall in the level of air pollution. On 3rd April 2020, the Dhauladhar hills became visible to the residents of Jalandhar, a city of Punjab state.[ii] Taking into account the distance between the two areas, it was a rare view and another noteworthy example of cleaner air.

b. Improvement in the water quality

Another positive impact of the Covid-19 was seen in the water bodies. Countries like India and Bangladesh face water pollution as the industrial and domestic wastes are dumped directly into the water bodies. Due to the shutdown of the industries for the past few months, the pollution load was reduced by a huge amount as the major source of pollution from the industries had diminished. For example, the rivers Yamuna and Ganga reached a notable level of purity due to the complete absence of industrial wastes. They appeared blue, spotless, and more transparent during the lockdown days.

Covid-19 has put the people in confinement, but at the same time, it gave an opportunity to the birds and wildlife to bloom and flourish in nature. Some of the rare views observed during the past few months are-
· A pair of whales were seen playing on the Mediterranean coast of Southern France. A deer was viewed roaming on the roads of Japan.
· In India, 3 Sambar deer were spotted roaming on the roads of Uttarakhand.
· Similarly, in Noida, Uttar Pradesh, Nilgai was found roaming on the streets.
· A leopard was spotted roaming very close to an Air Force base in Patna, Bihar.
· A flock of thousands of flamingos was seen splashing over the pristine water of Nartan Lagoon of the Adriatic coast.

Along with the positive impact, the Covid-19 also had a few negative impacts on the environment. They are-
· Since the breakout of the disease, there has been an increase in the biomedical waste generation, threatening the environment as well as public health.
· To protect themselves from the viral infection, people have been using face masks, gloves and other plastic based personal protective equipment (PPE). This leads to an increase in the amount of healthcare waste, which if not handled properly, might improve the rate of transmission and expose the waste workers to the virus.
· Recycling activities of wastes have been postponed by many countries due to the current pandemic. This has been done to lessen viral transmission. But this led to an increase in the garbage lot in the open areas, making the environment more vulnerable and increasing the risk of air pollutants in the surrounding.

This Covid-19 pandemic has been really hard on humankind. For the past few months, humans are restricted to their homes and there has been a drastic change in the socio-economic activities all across the world. But the one and only positive thing that the pandemic has given us is the better and blooming environment for these past months. The sky is getting clearer, the water is getting cleaner and the wildlife has been enjoying their freedom in nature. Nevertheless, such a positive impact will be a short-term impact if proper measures are not taken to curb environmental pollution. And the negative impact can be controlled by the proper management of the waste disposal in the respective countries. This pandemic made us realize that we have been neglecting our duties towards the environment and we need to respect, protect, and preserve it if we want to keep seeing it flourish in the future as well.