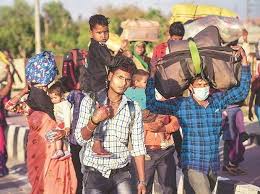 “Migration is an expression of the human aspiration for dignity, safety, and a better future. It is a part of the social fabric, part of our very make-up as a human family”  -Ban Ki Moon[i]
The concept of ‘Migration’ could be assumed to have been implanted by our first ancestors while they were on the verge of becoming fully human. The term ‘Migration’, derived from the Latin word ‘Migrate’, denotes the permanent or temporary movement of an individual from one place to another. Migration, a by-product of socio-cultural, economic, and political change, is an integral part of society since it has a major contribution to its economy due to having a direct link with the migrants’ economic status. However, this backbone of the informal sector of the country was highly affected by the outbreak of this pandemic of covid-19.

EMERGENCE OF THE PANDEMIC

Covid-19, a virus of completely new origin, was for the 1st time detected in late December in Wuhan city of China. Before even realizing it, this virus got spread all over the world affecting numerous people. This global health crisis has brought the entire world to a halt. It seems as if the entire world has taken a pause for a year now. This pause has adversely affected the entire mankind. Every section of society has been affected by this outbreak. But out of all, the suffering of the migrant worker is of the utmost degree.

The unbridled spread of covid-19 led various countries to adopt the method of complete shut down so as to cease human contact, and thus the spread of this novel covid-19. Our Indian government, in order to curb this situation, also followed the same path and made a sudden announcement of nationwide lockdown from 25th March 2020 to 14th April for a period of 21 days without any prior preparation [1]. Even though the step is so taken, was to save the human race or the vast population of India from getting into the clutches of covid-19, but the major question that the Indian Government might have left unanswered was- What would be the impact of this leader-centric approach of announcing lockdown, on the lives of the migrant or marginalized section of the country? This question struck the mind of every citizen of the country along with the state governments and the central government when a mass exodus of migrant workers was witnessed, trying to reach their native places due to the lack of means of earning money. The announcement of a nationwide lockdown brought turmoil in the lives of thousands of migrants. Migrants who until yesterday had a roof upon their head and work, even though with minimal pay to support their family, now had become homeless and jobless overnight. Especially the daily wage laborers who were solely dependent upon daily wages for supporting their lives immediately faced the challenge of lack of job and anxiety. The majority of migrant workers, who used to work in small industries, etc., also went through the constant fear of losing jobs. Since the owners of such industries themselves, were suffering from immense loss, they weren’t capable of extending facilities to their employees. For not being able to provide a salary to the workers, a large number of workers were fired thus pushing them into the cage of hunger, uncertainty, fear. These migrant workers who were once, the only earning member of the family upon whom the entire family was dependent, now due to the loss of job had become a burden on the family. The survival of the migrants in the host city had completely become impossible since the nationwide lockdown had snatched their bread and butter. Such circumstances constantly instigated them to opt for reverse migration. Since migrants belonged to 2 worlds- Urban insecure employment and stable homeland, due to the instability caused to the 1st world because of the pandemic, the migrants were left with no other option, other than returning to the second world.

Initially the government, in order to emphasize social distancing, had stopped all the transportation facilities. This forced a large number of migrant workers to walk hundreds of kilometers, on railway tracks and streets at a temperature of 400 C, to reach their families. During such journey, many died in the midway in many parts of Maharashtra, Uttar Pradesh, and Madhya Pradesh. The most heart choking was the death of 16 migrants on 8th May 2020, workers who got killed by the running of goods train over them while they had fallen asleep on the track [2]. Without understanding the major burnt being suffered by these workers, in many places, police manhandled and beat them black and blue for violating the lockdown policies. Witnessing the mass departure of people due to the problem of starvation, lack of job facilities, etc., the government took a few steps so as to ease down the problems faced by migrants in reaching their hometown. The government thus launched a new scheme, Migrant Workers Return Registration, which aimed at counting the number of daily laborers and migrant workers who had got stuck and arranging 14 days quarantine facilities before meeting their families. Not only this, but the Indian Railway also launched 4000 new trains, namely Shramik Special Trains targeting to relocate the migrant workers [3]. In-spite of taking such steps, its poor implementation didn’t prove to be of many benefits to the migrants.

No doubt, this pandemic has affected the lives of migrant workers beyond imagination, but along with this, it has also raised a big question mark on the humanity of the government. The Indian government didn’t show a shred of humanity when the state governments of U.P, M.P, Gujarat, and Karnataka approved the ordinance for suspending all labor laws for the next 3 years and empowered the employers with the power of “Hire and Fire”. The attempts made by the government in 2019 by bringing changes in some acts like in The Payment of Wages Act, 1936, the Minimum Wages Act, 1948, the Payment of BonusAct, 1965, and Equal Remuneration Act,1976[ii], for facilitating the laborers, now has been under reconsideration by the government because of the economic degradation of the country. The government for revitalizing the businesses of the country has brought into various amendments in the labour law, one of which is the extension of working hours from 8 to 12 hours without even realizing that these are violations of the rights of migrant workers under Article-19, Article- 21 and Article-23of the Indian Constitution. This pandemic has used migrant workers a lot. In the name of only revitalizing the Indian economy, these workers have been exploited to the fullest.

Even though, the fact that Supreme Court took the suo motto cognizance of the plight of the migrant workers, Delhi High Court’s direction to the Centre and State Government of Delhi to take necessary steps to alleviate the pain suffered by the workers can’t be ignored, such steps if the government didn’t result in anything fruitful. As it is a universally accepted fact that everyone sees the result, not the process to achieve the result, such steps of the government can’t be applauded. It is a matter of shame that even after 74 years of independence, India still hasn’t been able to provide equality to all its citizens, especially a dignified life to the poor people of the country. This pandemic again brought out this everlasting drawback of India before the eyes of people- namely obscene class inequalities, loss of society’s moral compass, and paralysis of politics and toxic media. As our Honorable Prime Minister suggested the approach of AtmaNirbhar for enhancing the country’s economy, in the same way, he must give his undivided attention to ensure the dignity of the migrant workers. The government should provide them with relief packages so as to prevent the inhumane suffering of the migrant workers. The government before introducing the nationwide lockdown actually had to analyze its drawbacks but instead of doing so, it announced 21 days lockdown. In order to compensate for its irresponsible, careless functioning, the government should keep the following things in mind:

i. It should analyze the entire situation with a humanitarian approach.
ii. It should give special attention to the mental condition of the workers, and should ensure that they shouldn’t suffer from any stigma and discrimination for being migrants and shouldn’t be given the tag of carriers of the disease.