“Education is the most powerful weapon which you can use to change the world.”

According to The United Nations, the term illiteracy means “the inability to read and write a simple message in any language.” People with such an inability are known as illiterates. This inability creates a very big vacuum in their life. Going to schools, colleges and attaining education is a very normal thing for many of us that we don’t even think and realize, about the privilege that we all have. There are still many places in India where this menace is still prevailing, where the children does not even get the basic education. It has worsened the pillars of the country. Illiteracy is a curse for a nation. 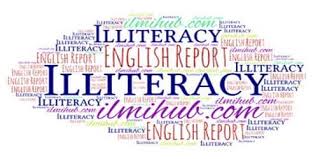 An uneducated person is equivalent to a crippled person who is not aware of his environment in which he is living. Countries and nations can come to a tail end because of the higher rate of illiteracy. It is a bane to the society. An uneducated person cannot find a right path for himself and because of this he eventually becomes a bond slave of others who use him as a puppet. Illiteracy is something like an intramural disease of sovereign India. After obtaining the independence, we realized that illiteracy is the main block of the country’s growth and development. It is inconceivable that, India which is a home of the first university “Takshila” of the world now tops the list of “highest population of illiterate adults.” India is a diverse country, diversity in sense of place, geography, traditions and abundance of resources. But these resources are of no use without the growth and development of human resources. Today the issue of illiteracy has become a very big question in front of the Government. It is high time, that we should exterminate the roots of illiteracy in the country for a better living of the people.

ILLITERACY, THE MOTHER OF DIFFERENT ISSUES

Every problem and issue in the society is deeply connected to each other, either directly or indirectly. The whole connection of these issues in the society that we board in, the strongest link of this connection is “illiteracy.” Illiteracy gives birth to different issues. The issues are as following:

If a person is educated, he is able to earn money. In India illiteracy is accountable for poverty as it creates a vicious cycle of life, where a poor remains a poor throughout his life. Educated and literate parents provide education to their children and make them fruitful towards the economic upswing.

Illiteracy and poor level of education has contributed to the ever increasing rate of unemployment in the country. Around 31 million people are unemployed in the country.

Uneducated parents don’t consider child labour as a bad thing. Illiteracy is the one thing which prevents them to take a right decision for themselves and for their children. As they are not educated they don’t know the harmful repercussions of it.

Due to illiteracy, the rate of female feticide is increasing at an alarming rate. There are still many places where people do such heinous things, because they are not educated; because of the mindset that is prevailing.

In India states like Bihar, Madhya Pradesh, Rajasthan and Uttar Pradesh shows a grim picture of this sad reality.

INITIATIVES TAKEN BY THE GOVERNMENT OF INDIA

The Government of India took several steps in order to combat the problem of illiteracy. They are:

The Government of India has taken a number of initiatives, yet unable to remove the problem of illiteracy from the country. Even till date, 26% of the population is not able to read and write. According to the International Commission on Financing Global Education Opportunity, “India’s school education system is under performing in terms of quality in female literacy when compared to its neighbors Pakistan, Bangladesh and Nepal.” Women who accomplished 5 years of primary schooling in India and are educated is 48%, which is very less than 92% in Nepal, 74% in Pakistan and 54% in Bangladesh.
Profit- oriented education both at the elementary and higher education level is steadily destroying the state of education. The motive of mid day meal scheme which was launched with the aim of providing nutritive and healthy food to the children has been impeded by providing low quality of food to the children. So, in order to eradicate the problem of illiteracy from the country it is very crucial that we first shape ourselves and change the attitude. Eradication of illiteracy should not only be a government oriented goal. Every educated person should take this as their personal goal. Every small contribution by the educated person can help in removing this menace altogether.

Once we achieve the power of education, we will become a world power as we have the strongest weapon of ‘knowledge’ with ourselves and as said by Barack Obama, “Change will not come if we wait for some other person or some other time. We are the ones we have been waiting for. We are the change that we seek.”

Image Credits
This blog is authored by–   Anuja Saklani