E-contracts are one of the significant parts of e-Business across the Globe. There is no exhaustive definition as to e-contract and most of the time only generic definitions are available which can be such as E-contracts are referred as cyber based digital or online contracts. Electronic contracts have also found statutory recognition under the Information Technology statutes adopted in many legal systems in the world and India is not an exception. Further see a comparative international outlook on e-contracts along with the challenges for the jurisdiction. 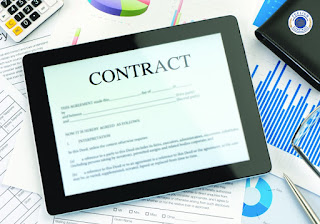 E-contract is a very significant tool for smooth functioning rather existence of e-commerce and related issues. E-contracts are intended to aid businessmen and consumers in formulating and implementing commercial contracts within e-businesses. It includes formats for the sale of products and supply of digital products and services to both consumers and businesses.
The US Legal Definition defines e-contracts as a kind of contract formed by negotiation of two or more individuals through the use electronic means, such as e-mail, the interaction of an individual with an electronic agent, such as a computer program, or the interaction of at least two electronic agents that are programmed to recognize the existence of a contract.

To come about the conclusion it would not be wrong to say that lsw should be dynamic because society is dynamic. The history of development of contract law in India is predominantly guided by personal laws especially Hindu law and Islamic law. The application of British personal laws is also a part of contracts. The various types of contracts are verbal contracts, written contracts and implied contracts. The first issue that arises herein is that do e-contracts have validity at the first place or not? Or whether the present laws relating to e-contract and its operation are suitable for serving the purpose or not and also that the identity of parties transacting through digital transactions is safe and guarded by the government or not?

India is not so much technologically advanced as e-contracts and e-governance has not reached a good and desirable number of citizens till now. Citizens have been given limited access to information. The notion of e-contracts suffers due to illiteracy, lack of awareness amongst citizens and most of the people from the rural areas causing the hindrance in awareness. Also the biggest challenge in the effective implementation of e-contracts is that government and other authorities use different terminologies and methodologies. Also there is no alternative way for identifying a person on the other side than digital signatures or the public key.

The last challenge is that the parties may be made liable to bear the burden which has been caused due to technical defaults such as programming error or deliberate misconduct of employees. The Application of conventional common law principles of jurisdiction to the borderless world of internet transactions has proved to be very challenging for the courts.

Initially Governments were reluctant to adapt to the demands of rapid electronic age but now most of the countries of the Globe have enacted and recognized electronic contracts India is no exception to it but there is no specific legislation relating to e-contracts, however various laws acting in unification are trying to regulate the business transactions of e-contracts such as;

Firstly, it is the Indian contract Act, 1872 that governs all forms of contracts and states the essentials, modes of fulfillment, and remedies of breach of contract. Secondly, the information and technology act, 2000 provides state usage of electronic signature and section 10 of it recognises e-contracts. Thirdly, the Indian evidence Act 1872 enables the admission of electronic records and there are various important sections like section 65a and 65b which relate to the admissibility of the electronic records in the court of law.
The security measures of the same includes digital signatures and electronic signatures and encryption. It is the electronic signatures that are uniquely created example OTP and are more general in nature example scanned copy of signature. Whereas encryption is required to protect the data and make it accessible only for the concerned parties. It is required when personal all confidential matters are being shared.
India needs a definite law to decide the jurisdiction of Courts where disputes related to ecommerce transactions arise. This is so because a website can be accessed anywhere in India and thus, according to the precedents till now, a plaintiff can institute the suit anywhere he wants without taking into account any of the defendants’ convenience thus infringing his right to fair, convenient and speedy justice. Therefore, the current laws in India in respect of e-contracts and its operations are not appropriate in serving the purpose.


This blog is authored by- Anshika Raj Singh