About 67 million hectares of forest land burnt annually between 2003 and 2016, mostly in South America and African continents.[1] Wildfires refer to giant uncontrolled infernals that burn and quickly spread through landscapes. They can travel upto 14 miles/hour.[2] Types of wildfire include forest fire, ground fire, surface fire, crown fire, bush fire, spot fire. While wildfires can be both natural and man-made, 90% of the wildfires are caused as a result of human activities according to the US National Park Service.[3] For example, unattended campfires that later become uncontrollable, improperly handled cigarette butt ends, or arsons, sparks from fire equipment in falling power lines are several factors that cause fires. 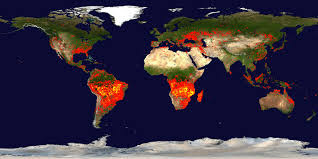 Wildfires require a Fire Triangle i.e., a heat source, fuel and oxygen. They spread in the direction where there is abundance of these elements. Controlling wildfires involve controlling or eliminating one of these three feature

Factors responsible for generation of wildfires:

Heat sources can be the sun, lightning strikes, a nearby volcano or a smoldering match. Dry dead grasses, leaves and trees are common fuels for wildfire. Pine trees and other evergreen trees contain flammable substance that burn when exposed to heat source. As the burning commences, the air helps in supplying more oxygen to sustain the burning and also aids in transporting the fire across vast areas in few minutes time. Since wildfires occur outside in natural environment, there is abundance supply of oxygen thus it is difficult to control. Air contains 21% of oxygen while only 16% oxygen is required to sustain fires. Global warming and earlier snowmelt are major factors in extending the period of burning. Warmer climates creating high humidity are also favorable weather conditions to generate fire. Other factors include winds that can not only transport fires but also generate fire by drying materials in moist areas. Also, fires can generate their own wind by up wheeling of hot air they create. It helps fresh air fill in the vacuum they create thus enriching it with more oxygen. Temperatures aid in spreading fire. During day when sunlight is present, warmer air helps fire travel to upslope landscapes. Earlier snowmelt decreases atmospheric humidity, increasing temperature extending fire season. For example, the Yellowstone Park fires in 1988 that lasted over 3 months despite deployment of 25,000 firefighters and disbursing over 120 million USD.[4]

Wildfires play a significant role in balancing of nature. It serves many important ecological functions. It is required for renewal and maintenance of ecosystem. In grasslands, it removes non-native plants from the mount. It replenishes back nutrients into the soil, helps remove herbal insects and diseased plants. It helps clear canopies so that sunlight and rainfall can reach the forest floor. This stops growth of new grasses and wildflowers reducing competition for water and nutrients. Forest fires stimulate flowering and fruiting of many plants. Some species of trees are adapted to taking advantage of the phenomena. For example: Jack Pine trees when exposed to intense heat, drops its seeds onto the soil making sure that new plants can grow in place of dead trees. This is because wood ash is generated as a consequence of wildfire. It is one of the best fertilizers that contains all important nutrients required for growth including calcium, potassium, and magnesium. Wood ash also acts as liming agent that helps neutralize the citric soil by raising the pH due to presence of carbonates left behind after the wood is burnt.

Global Wildfires- with respect to the United States and Australia

Most wildfires occur in the United States with 71,300 wildfires occurring annually that consumes 6.9 million acres of forest burning every year since 2000s.[5] In the United States; high temperatures, droughts, frequent lightning and thunderstorms create perfect condition for occurrence of wildfires. This is followed by Australia where 12.35 million acres of land have been burnt till now by bushfire viz. equal to twice the size of Belgium, bigger than 2018 Brazil fires and 2019 Amazon fires combined.[6]

Bushfire season is an annual affair in Australia where fires rage throughout the country. The 2019 was the hottest and driest year in Australia’s history. In September 2019, the drought, unprecedented heat waves, strong gusty winds collectively had created a disastrous fire conditions- smoke from bushfires generated its own weather causing thunderstorms and lightning and strong winds that spread wildfire more rapidly. Flames reaching 70 m high, 1400 houses destroyed, many people killed, 500 million animals have died in New South Wales alone.[7] Multiple high temperature rises creating flammable conditions, leading to multiple megafires and having burnt an area of over 18 million heactares (bigger than size of England and Wales combined).[8] Residents from affected areas had to forcibly relocate in need of safer places. Same situation is prevailing in the current California wildfires. People have started temporarily migrating to neighboring states.

Wildfires are destructive and deadly. There are both short term and long term impacts. Short term impact may include stormwater runoff. Loss of vegetation makes the soil hydrophobic, thus, prevents water absorption. Long term impacts include releasing of smoke, soot, other aerosols into the air affecting environment, causing more pollution. Wildfires are a source of tropospheric ozone(O₃) that adversely affects human life and ecosystem.[9] They release carbon dioxide (CO₂) and other greenhouse gases into the atmosphere contributing to further global warming. Particulate matter- black carbon get carried with the air over large distances affecting air quality in those regions, they also come into contact with water courses and affect the water quality. Rebuilding infrastructure damages to power grids, mobile towers etc are costly and time-consuming. Peatland fires emit more CO₂ than ordinary forest fires or bushfires. 2019 UNICEF Reports state forest and peatland fires across Kalimantan and Sumatra, Indonesia have put 10 million children at risk from air pollution.

Recent Redwood wildfire in California- Lightning strikes that started on the 15th of August, 2020 in the iconic Redwood forests has led to 22 mega fires, evacuation of more than 12,400 people, destroying 900 wildlife species, over 3000 structures.[12] Over 22,000 firefighters are currently fighting to contain the spread of the fire, putting their lives on the line. The successive 14,000 lightning strikes have burnt more than 1.5 million acres. The Redwood forests have managed to survive. To deal with such catastrophic conditions, Californian lawmakers have proposed a last minute Bill to spend 500 million USD in training firefighters also, reserving further 2.5 billion USD for future wildfire maintenance projects.[13]

How can fire spread be controlled?

Fire management involves prior planning before commencement of fire, monitoring fire and assessment of its post impacts; also includes also create prescribed intentional burning to control the spread to reduce fuel and also protect endangered species.[14] The technique of backburning is used that involves setting a controlled fire in the path of approaching wildfire. High humidity in air during night actually helps in lessening the spread of fire where burning takes place downslope. Water can also aid in controlling the spread by dampening the fuel, reducing heat and blocking oxygen. Thus firefighters resort to putting water the next fire targets. But water can evaporate easily thus firefighters put gel in it making it sticky water also called slurry that is put by helicopters across the places. Planes and helicopters are quite useful in dropping huge quantities of water, fire retardants and fertilisers. Fire retardant like Phos Chek are costly and used to create a fireline stopping more fires from starting. For each drop, thousands of gallons are required. 747 Supertanker is the world’s largest firefighting aircraft that facilitates this process. One drop contains 90, 600 gallons flame retardants costing 60,000 USD.[15] It can create a 3 mile long fireline instantly. Thus when all the flammable material is extinguished, there is no more fuel left for the approaching wildfire to burn and it consequently dies out.

Despite 90-95% wildfires resulting out of human activities, there is no specific international convention or treaty that has been empowered to affectively deal with this. It is regarded as a naturally occurring environmental hazard and thus man made factors leading to the fires are ignored. There are several international emergency response agreements that deal with providing emergency solutions to this menace. There are 98 forest specific legislations implemented over 38 nation states.[16] Also it has supportive guidelines formulated. In 2003, FAO developed Fire Management Voluntary Guidelines as a global strategy for international cooperation in fire management.[17] These guidelines set out principles and strategic action to address economic, environmental aspects of fire management. They give key recommendations to ensure national policy measures to be developed following these recommendations. There are respective state laws and policy guidelines that center around prevention and controlling spread of wildfires. For example: the Environment Protection and Biodiversity Conservation Act, 1999 in Australia, Federal Fire Safety Act, 1992.

Wildfires are an amazing force of nature but the problem arises when it starts its destruction cycle by burning house properties which is everywhere today. And these are getting bigger and faster and more repeated than before. Forest fires are being extinguished by campers and firefighters as early as they can. This has led to overgrown forests increasing fuel and now mega fires have replaced the earlier small fires. A study by American Geophysical Union suggests number of large forest fires in 17 Western states have increased by 7 per year between 1984 and 2011. Area burnt has increased by 36,000 hectares per year. Climate change causing temperature to rise of drought conditions and snow melt. Manifestations of insects like winged bark beetles have increased proportion of dead trees creating more fuel to burn. Middle latitudes and Australia have carbon rich peat soil thus it’s predicted that these regions will experience more wildfires in the long term. Stopping deforestation and restoring damaged ecosystems can provide 30% of global climate solution.[18] Policy recommendations like more spending on fire-fix funding, boosting surface research, stopping construction in high-risk areas, turning forest byproduct into commercial option generating revenue, building bedrock environmental laws would go a long way in protecting the environment also ensuring sustainable development.

1 thought on “Global Wildfires And Its Impacts”