INDIA rightfully justifies the title of ‘the land of diversity. It is through this term that we epitomize ourselves on the world stage; the poster child of all things inimitably unique, living under the same roof, guarded by one single Constitution. 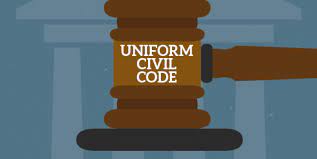 But what most outsiders (and sometimes insiders) disremember is the price we pay for this diversity. India’s skirmish with realizing diversity isn’t free of the weighty payment that we were bound to make with our diversified personal laws, governing, primarily matters of marriage and divorce, adoption, and succession contrarily for each religious community. The solitary safeguard to this diversity is the Special Marriage Act, which since 1954, has been providing a haven for those who wish to be guided by a different kind of law due to many reasons that they may cite, inter-religion marriage being the key reasoning given by most.

A solution for this is provided in Directive Principles of State Policy under Article 44 of the Constitution[1] which ‘suggests’ and ‘recommends’ the states to enact a uniform civil code for the citizens living within their domicile.

However, one must first comprehend the concept of this ‘uniform’ civil code, as prescribed by the Constitution. Uniform Civil Code[2] is a ‘proposal’ not a strict reality, as suggested by the Indian Constitution itself. This proposal was left by the constitution-makers in the text with the hope that one day, shortly after Independence of the land, once the citizens have adopted the exiting laws well enough, the personal laws of every citizen would come to be guided by a single entity – the UCC.

However, the journey has been painstakingly long, with parties like Bhartiya Janta Party, guaranteeing the implementation of UCC all over India, a claim which the left-wing of the Indian political scenario comprising of mainly Muslim groups and other religious orthodox groups stalwartly disagrees with.

The reasonings of either party seem fit and entirely comprehensible – BJP-like parties demand unity while the opposing groups suggest that unity must be maintained with diversity for a country like ours and that this diversity will not be satisfied if personal laws are hindered.

But amidst this chaotic debate is a state that has not only adopted UCC but derives the power of this UCC from the historic Napoleonic Code.

Goa, a state of merely eighteen lakh citizens, one of the smallest populations when compared with other Indian states has had a Uniform Civil Code since its liberation from the Portuguese settlers.

This code, which was first introduced in 1869 when the Portuguese granted Goa and Damaon the status of ‘Província Ultramarina’ (overseas territory), is now known, rather simply, as ‘Goa Family Law’. With Goa first being a colony of the Portuguese and then a full-fledged territory, it is not astonishing that its laws, prior to its independence, were heavily predisposed to the Portuguese laws, which in turn draw their worth from the Napolean Code.

In Portugal, in 1966, a new Civil Code was introduced, however, the territory of Goa, which was once under them, continues to follow the earlier Civil Code’s based adoption, which is the Uniform Civil Code, as applicable in Goa to date.

Albeit the history of the Portuguese influence on Goa’s Uniform Civil Code, today is extensive, the code, back then, did draw many influences from the changes in laws that were made, first in the Portugal Republic and subsequently found its way to Goa. A classic example of the same would be the Portuguese Decrees on Marriage and Divorce of 1910 which was enacted on 3rd December 1910, after the establishment of the First Portuguese Republic to grant citizens, especially women, greater power in matters of family law.

This example not only suggests how the only state in India to have a working UCC absorbs its history from another land, greatly different from the sources the other Indian states takes inspiration from but also how the political scenario of that land has had continuous effects, in foregone history, on the present UCC applicable to the state.

However, the government in India, in a rather rare manner was patient when posed with the question of UCC in Goa when the state was merged with the mainland territory. A committee was set up to analyze whether Goa would be able to adopt non-uniform laws that had been prevalent in India for more than a decade and whether Goa will comfortably follow them.

This move was met with mixed emotions from the citizens of Goa. Mixed emotions, which could be traced to a single community that was divided in opinion. The Goa Muslim Shariah Organization was quick to celebrate the move and welcomed it with open hands, but the Goa Muslim Women’s Associations Muslim Youth Welfare Association and other groups which identified themselves as ‘liberals’ was strongly opposed[3] to the move and was adamant about the continual of the personal laws, as they were being followed from decades in the territory of Goa.

This resistance was soon joined by other groups, especially comprising of youth and student-run organizations, and needless to say, Goa’s UCC continues to govern the personal laws of every citizen to date.

TESTING ‘UNIFORMITY’ – Is the Goan UCC as ‘uniform’ as it’s categorized to be?

Goa’s UCC is not strictly uniform, it would be impossible to implement such a code. There can be no ‘purely uniform’ Civil Code, which would not be met with a confrontation of any kind. Whether it’s for a colonial territory or a deep-rooted, secular, and democratic nation, UCC in its noblest sense does not mean that there have to be stringent codes of conduct for every citizen. To have such a uniformized Civil Code would be to imagine oneself living in a utopian land.

Therefore, the Code, just like any other UCC, has its exceptions when it details laws for certain individuals.

Few apparent examples are cited below;

1. The foremost article that lacks uniformity is Article 1057 of Goa’s Code which provides for the registration of marriages in the state. This article brings the lack of uniformity on the grounds of solemnizing marriage. This lacks uniformity between Catholic and non-Catholic marriages. Usually, the intent of marrying has to be recorded in Goa, after which the would-be spouses proceed to sign the marriage deed. After this, signatures in Churches are enough for a Catholic couple to be married, as per civil registration, however, what many non-Catholic women fail to comprehend is that a second signature is required if you’re not a Catholic.

2. In another scenario, Article 1204 permits the husband in a registered marriage to attain divorce on the grounds of adultery, however, the divorce battle is tougher for a woman, who can attain separation if the adultery is committed by her husband with a public scandal and can attain divorce if the mistress is living in their conjugal home with them.

3. Article 3 of the Decree of Gentile Hindu Usages and Customs of Goa, 1880, an Act that was implemented by the Portuguese and continues to influence the code, delivers that a husband (Hindu) can take an additional wife in a scenario where the wife isn’t able to deliver a child if the wife has attained the age of 25. But that isn’t all, if the wife has attained age 30 without having a son, this provision would work for the husband. The provision, clearly, is conflicting with both the Indian Penal Code and the Hindu Marriage Act which doesn’t support bigamy in any scenario whatsoever.

Goa’s Uniform Civil Code is not without its flaws and disparities with the Indian laws, some of which have been detailed above, however, it is still a magnificent working example of what could be if India was to apply UCC. The uniformity factor, visibly, can be questioned but with other laws mostly governing the state under a single umbrella, one can say that there is some uniformity in the essence of the Goan UCC.

[1] ARTICLE 44 OF INDIAN CONST. – State shall endeavour to provide for its citizens a uniform civil code (UCC) throughout the territory of India.
[2] Further referred to as ‘UCC’ too.
[3] Partha S. Ghosh (23 May 2012). The Politics of Personal Law in South Asia: Identity, Nationalism and the Uniform Civil Code. Routledge. ISBN 978-1-136-70511-3.
Image Source
Author: PRERNA MANOCHA