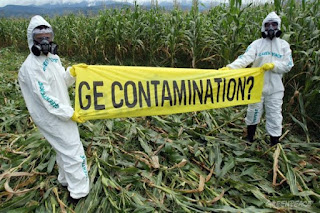 WHAT IS GENETIC ENGINEERING?

Genetic engineering is the group of applied techniques and biotechnology used to cut up and join together genetic material and especially DNA (deoxyribose nucleic acid), from one or more species of organism and to introduce the result into an organism in order to change one or more of its characteristics.

Genetic engineering practices are used to produce an organism of the desired characteristics. It can be practiced among various living organisms including humans, animals, plants and trees. On July 5, 1996, Dolly the sheep—the first mammal to have been successfully cloned from an adult cell—was born at the Roslin Institute in Scotland. The first genetically modified crop, an antibiotic-resistant tobacco plant, was produced in 1982. China was the first country to commercialize transgenic plants, introducing a virus-resistant tobacco in 1992.

GENETIC ENGINEERING AND THE BIODIVERSITY

Genetic engineering in animals have been practiced in various ways on various organisms in order to obtain the desired genetically modified organism. This includes adding gene from insect killing bacteria to cotton so that it kills the insects eating cotton, producing genetically engineered moths that infect their relatives so that they all die and won’t destroy crops, inserting spider gene into that of goat helps in producing milk that contain tiny strands of spider milk which can be made into a strong stretchy rope. Along with this the scientists have started creating hybrid creature of humans and animals. Adding to this, British scientists claim to have cloned the first human embryo.

On one hand it helps in increasing resistance, productivity, hardiness, and feed efficiency; better yields of meat, eggs and milk; improved animal health; desired characteristics; to have a disease free, non-disabled, healthy child without any genetic disabilities or diseases; to increase the immunity and correct the defects.

On the other hand, it has major disadvantages. Ethically, it violates the natural organisms’ intrinsic values. It tampers the nature with mixing genes among species. It increases the stress level among the animals. There is also huge risk that even a slight mistake can produce an entirely different undesired, new characteristics and physical disabilities or defects which are difficult to be treated among animals. Economically, this practice would discriminate poor from rich, who are financially able to obtain the desired charactered offspring. There are possibilities of causing allergic reaction, unknown health concerns for humans and destruction of natural ecosystems, new disease being introduced. There are chances of replacing important gene instead of mutated gene which would increase the complication. This reduces the genetic diversity and makes organisms susceptible to simple diseases. It can also make humans or organism toxic to one another. Thus, it harms the balance in ecosystem.

Genetic modifications in plants helps in improving nutritional value of food, increases crop production, supply and thus increases farmers income. It creates a safer environment due to decreased use of pesticides and hence improves the quality of ground and surface water with less pesticide and residues. Its quality and taste increase and take less time to ripen. It improves the crop resistance to disease, pests and herbicides. Use of bioherbicides and bioinsecticides are environment friendly, thus contributes to better natural waste management. The crops develop stronger tolerance to certain whether conditions and environmental issues like drought, extreme cold etc. Economically, due to increase in production, it will be available in the market for a reasonable price and thus decreases the rate of poverty through starvation. It can also make certain food to last longer than normal. It increases the possibility of growing more food in a small area.

This practice equally contributes to the cons among the biodiversity. There are high chances of the crops being toxic if they are genetically modified on a regular basis. It can cause allergic reaction, could harm environment by impacting insects, birds, mammals, waters etc. There are possibilities that the food companies conduct their own tests and not the FDA. Ethically, some may also feel it as disrespecting god by modifying his creation. GM (genetically modified) food could cause abnormal conditions for those suffering from chronic illness. Some GM ingredients can also cause cancer as stated by Dr. Stanley Ewan “food and water contaminated with genetic engineering material could increase the growth of malignant tumor”. It may also cause allergy in humans as that caused by GM soyabean containing “Brazilian protein”. Some toxins which originate during GM, if expressed in plant nectar and pollen, may disrupt pollination. This way again genetic engineering causes imbalance in the ecosystem.
There are possibilities of this practice being used for illegal and unnatural activities like creation of new creature. This may exploit the biodiversity.

The following are some of the laws in various countries which regarding the adoption of genetic engineering practices:

According to Canada Food and Drugs Act, it has mandated to assess the safety of foods for human consumption, including GMO in foodstuff, and for authorizing it to be sold. Advertising or labeling the presence of GMOs in particular food is voluntary unless there is a health or safety concern.

According to US Department of Agriculture’s Animal and Plant Health Inspection Service under the Plant Protection Act; GMOs in food, drugs and biological products are regulated by the Food and Drug administration under Federal Food, Drug and cosmetic act and the public health service act.

According to GMO legislation of Europe, while marketing and importing GMOs are regulated at EU level, the cultivation of GMOs is left to EU members who have the right to prohibit or restrict the sale or cultivation of approved GMOs based on adverse effects on health and the environment.

GMOs in Argentina is regulated by general law on Seeds and Phytogenetic Creations and the law on the Development and Production of Modern Biotechnology. It is intended to promote the efficient production and marketing of crops by providing farmers the assurances as to the identity and quality of seeds that they acquire while producing GM crops.

Bt cotton is the only GM crop allowed in India. Food Safety and Standards Authority of India declared that the GM food is not permitted to be sold in India because they do not have approval under FSSAI, 2006.

Genetic engineering can be considered as a boon when it comes to the large amount of advantages it provides and the regulations passed in various countries to ensure the safety of the same, but at the same time we have to consider the consequences of it as well. In this perspective, instead of developing a lot, out of greed and facing a irreversible damages, it is better to improve the existing situation naturally like concentration on improving the soil fertility, creating the suitable environment which ensure more production and less damage etc. This will ensure environmental friendliness as well.