Agriculture in India is undeniably the principal livelihood provider, especially to the rural people. Its paramount value cannot be ignored as 70% of India’s population is engrossed in agricultural business. India is listed among the top producers of various items such as wheat, rice, pulses, spices, cotton, tea, sugarcane, milk, sheep and goat meat, fruits, and vegetables, etc. Despite its being a powerhouse of agriculture, its share in GDP contribution is declining each year. Thus, to metamorphose the whole agriculture system in the country and introduce the concept of “One India, One Agricultural Market” which will subsequently lead to growth in the farm sector, the government has aimed to open the gates of the corporate world to farmers. For this, it has passed two acts viz. The Farmers’ Produce Trade and Commerce (Promotion and Facilitation) Act, 2020 and The Farmers (Empowerment and Protection) Agreement of Price Assurance and Farm Services Act, 2020; and amended Essential Commodities Act, 1955. 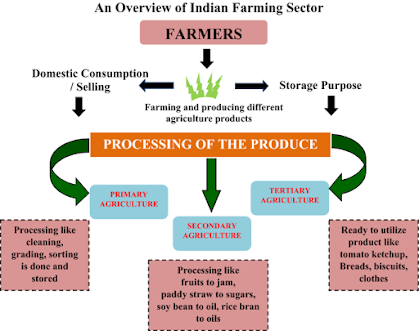 KEY HIGHLIGHTS OF THE FARMERS ACT 2020

The Farmers’ Produce Trade and Commerce (Promotion and Facilitation) Act 2020
The objective behind the implementation of this act to open up the agricultural market and provide selling choices to the farmers beyond the Agriculture Produce Market Committee (APMC) mandis at a better price.[i] APMC is a marketing board that was set up by the state government to provide the necessary infrastructure to farmers for trading; licenses to buyers, private markets, agents, retailers; and levying market fees or charges on the trading of agricultural produce. Its main objective was to ensure fair trade between buyers and sellers and to safeguard them from being exploited by zamindars and moneylenders.[ii] Nevertheless, it is only on papers, in practice, it was deceiving the farmers. APMCs had a monopoly on the agricultural market; farmers were not allowed to trade outside the APMCs premises. However, after the enforcement of this act farmers are allowed to sell their produce outside APMC and all over the country.

This new act has created an ecosystem where farmers are allowed barrier-free inter-state or intra-state trade of their produce, promoting a concept of ‘One Nation, One Market’ i.e. they have monotony over the decision of selling their produce.[iii] For promoting inter-state trade, the government has inaugurated the ‘Kisan Rail’ which runs in the whole country to ensure the transfer of agricultural produce from one part to another.

This legislation also provides for the framework of an electronic trading platform in transactions for Agri products. It is mentioned in the said act that the government may develop a system of Price Information and Market Intelligence to propagate information among the farmers. The government has initiated an E-Nam portal (National Agricultural Market) to unify the national market by eliminating information lopsidedness between buyers and sellers.

This law also provides for the prohibition of any cess or levy, fee, charges on “farmers, traders and electronic trading platforms” for the trading of agricultural produce under the State APMC Act or any other State law.[iv]
Moreover, provision has also been made for the resolution of a dispute, in case if it arises between farmer and sponsor concerning the transaction, parties may mutually apply to the Sub-Divisional Magistrate for the resolution of a dispute through conciliation.[v]

Adding on to the previous act, this act introduces the concept of contract farming. Farmers can enter into a commercial agreement with companies, wholesalers, retailers, or exporters before the production of the agricultural produce, thereby wiping out the fear of exploitation and transferring the risk of unpredictability and uncertainties of the market to the sponsors. The farming agreement provides for the minimum period i.e. one production cycle of livestock or one crop season and maximum period i.e. of 5 years.[vi]

The agreement must contain information regarding the price of agricultural produce. Farmers can fix prices before the farms’ production. In case of any variation in prices, it is mandatory to pay for a guaranteed price and any further amount if mentioned in the contract.[vii]
This legislation will stimulate the private sector to invest in the agricultural market in India subsequently providing a pool of funds for production and building networks between buyers and sellers for the supply of agri-products to the national as well as international market. Further, it provides for the accessibility of modern technology and better agricultural infrastructure to the farmers and enhances their income.

Farmers’ have been provided with adequate protection under the said act, sponsors are prohibited from acquiring agricultural land and modifying or altering the premises of farmers.[viii] The contract will only be signed in the context of agricultural produce not of agricultural land.
For a good measure, legislation has allowed farmers to market their produce directly to the sellers without the intermediaries thereby realizing the full value of their produce. An effective mechanism for the resolution of any disputes concerning the farming agreement, in the case, arises, is mentioned in this legislation too.

This act amends the Essential Commodities Act, 1955 by inserting sub-section (1A) in S. 3 which talks about the powers of controlling production, distribution, supply, trade, and commerce of any essential commodities. It provides for the regulation of the supply of certain items such as pulses, cereals, potatoes, onions, oil, and oilseeds only under extraordinary situations. These comprise war, famine, an extraordinary rise in prices, and any natural disaster of severe nature. It removed these specified items from the list of essential items and deregulates them.

This amendment has exempted processor or value chain participants from the application of stock limit if the stock limit does not surpass the ceiling of installed capacity of processing or export demand for the exporter. Further, this subsection does not apply to the Public Distribution System (PDS) established by the Central Government under the said Act or any other law.

SHORTCOMINGS OF THESE ACTS

The Farmers Act of 2020 has triggered large protests in the whole country. Contentions have been raised that eliminating the monopoly of the APMCs will lead to the dismantling of the Minimum Support Prices (MSP) and this concerns the farmer.

Another concern was that The Price Assurance Act does not provide for the price fixation mechanism. It is apprehended that private companies can exploit farmers due to the absence of negotiation skills. The Act provides for contract farming with the private companies but due to the absence of knowledge, bargaining capacity, and resources for legal battle can lead to their exploitation.

Critics anticipated that implementation of these bills would lead to undermining of food security as deregulation of food items would encourage traders or exporters to hoard farm produce when harvested and release it when there is a rise in prices.[x] It is apprehended that this legislation will result in unreasonable fluctuation in prices of essential commodities as the state government wouldn’t have known about the availability of food items in the state.

The farmers are the heart and soul of the nation and their development is our priority, but the acts implemented by the government for their growth have led to mass agitation by them. Critics thought that these acts can lead to the worst situation however some are of the view that implementation of these acts in the right direction will help not only in the holistic development of the nation but also in the upliftment of the farmers. These farm acts will act as a catalyst for the growth of the farm sector as these will permit the corporate sector to invest in the farm sector in constructing infrastructures and provide technologies and supply chains to the Indian farmers for selling produce in national and global markets. These acts are the initial steps of the government for uplifting the farmers and freed them from the clutches of the Mandi system. Thus, it will foster economic growth and strengthen the economy.