India is a land of cultures. From Kashmir to Kanyakumari and Kutch to Arunachal Pradesh, various religions glorify its tradition. She is known around the globe for its religious practices and customs. It is the oldest civilization preached for its values and beliefs. There are 28 states and 8 Union Territories having different religions living in harmony and imitating a beautiful picture of unity in diversity. Unlike western countries where whole nation is seen as a single feather India is a bird with myriad feathers. The religious diversity is the soul of the country and introduction of Uniform Civil Code would be an encroachment to it in all spirits. The different states displaying different cultures eventually fused through a common bond to showcase a national cultural identity. 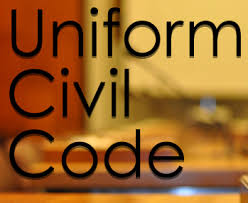 “India is the cradle of the human race, the birthplace of human speech, the mother of history, the grandmother of legend, and the great grandmother of tradition. Our most valuable and most artistic materials in the history of man are treasured up in India only!”

A move to ignite fire

A place where religion varies every 50kms, introducing a uniform code is a daunting task. It will bring an outrageous uproar disturbing the peace and tranquility in the country. Religion is a sensitive subject and connected with the faith and belief of people. Any action against one’s religion is an outbreak on sentiments and feelings associated with the religious dogmas. It may seem to be an audacious and reassuring move but it will lead to a wave of war and conflicts among various religions. A country where there are frequent revolts between the Hindus and Muslims UCC will ignite the spark and lead to a wildfire burning away the brotherhood amongst individuals of various religious groups.

India is a secular country with a number of traditions, cultures, customs and beliefs deep enrooted. The introduction of UCC is an attack on the secularism by imposing a set of rules and barring from practicing the religious practices of one’s own choice. It is also against the Article 25 of India Constitution providing Freedom of Religion. The founding fathers while laying down the provisions of the constitution had in mind the regional diversity of the country and preserved its diverse nature. The UCC oversteps the principles and erodes the secularism, one of the pillars of Indian Constitution.

Conflict over Inclusion and Exclusion

There is a conflict over the matter as to what laws to be incorporated and what to be omitted. It is a challenging task to decide as to which practice of marriage custom should be included and what practices should not be allowed. This will lead to a debate as to which religion should be prioritized leading to a tug of war between various religions. It is hard to make people forgo their customs and beliefs and adopt UCC.
There has to be a set of laws accept by all the communities. There should not be imposition of majority beliefs on minority as it will be do an irreversible harm to the minority religion. The minority should not be neglected on the whims and fancies of the majority to bring their religion in the realms.

The major conflict with the personal laws lies in the discriminating laws for women. Therefore, there lies a need to introduce gender neutral laws rather than implanting Uniform Civil Code. The ill practices which puts women on a lower pedestrian with men should be abolished leading to an equal society. This in turn will also help to achieve the constitutional goal under Article 14 i.e. Equality before law.

It is a long and hard way to go. Since ancient times the women has been treated inferior to men. With passage of time there has been changes in various personal laws to empower women such as The Hindu Succession (Amendment) Act, 2005 (39 of 2005) was enacted to remove gender discriminatory provisions in the Hindu Succession Act, 1956. Under the amendment, the daughter of a coparcener shall by birth become a coparcener in her own right in the same manner as the son.

The right guaranteed by Constitution under Article 25 would be infringed with the introduction of UCC. This is the very reason the draft bill for the law is under debate and discussions and not been implemented yet. There has to be an approach so that no community is discouraged but there is no comprehendible way in which this can be done.

There are various countries around the globe those have overcome the hurdle and successfully implemented Uniform Civil Code. The reason behind the success lies in the fact that they had no diverse cultural background as in the case of India. The countries with Uniform Civil code are either western or Islamic countries have less or no religious diversity. In Islamic countries the religion which is preached is Islam which makes it easy for the state to implement the UCC and carry out its function smoothly. Also, in France the Uniform Civil Code exists since Napoleon’s time and reforms were brought to make it gender neutral.

Therefore, it is clear from the discussion that such code cannot be implemented in India where the unity lies in the diversity. There will be riots and conflicts and people will have no acceptability for a code which prohibits them for practicing their generations old customs and practices. It will shake the religious conscience of the countrymen, a country where religion is given utmost importance. India gives so much importance to religion that name of god is preached before starting any new venture or onset of new adventure.

The need of UCC arose from the humanitarian ground and the need of codification to resolve the conflicts between various personal laws. The social attitudes and aspirations are shaped by universal and global principles of equality, humanity, and modernity. Despite all the arguments in favour of UCC, the discussion above made it quite clear that there should not be such code. It will take away the religious freedom and crush the spirit of our national diversity.

The current institutions need to be modernized, democratized and strengthened for this change. Sincere efforts towards women empowerment have to be taken for women of all religions. There are various points of arguments on both the sides of the debate but such move should not be a sheer political motive to fulfill the desire of those with power at the stake of minority. The need for an umbrella legislation has not yet emerged in India.
The steps should be taken to strengthen the personal laws and fetching in the picture gender neutral laws for the betterment and upliftment of society leading to a progressive nation.