Relation between Right and Duty

The popular jurisprudence behind the relation of right and duty provides that the two components are inseparable. The Constitution of India follows this principle and thereby fundamental rights and fundamental duties are provided in Part III (Article 12 to Article 35) and Part IV A (Article 51 A) of the Indian Constitution respectively. 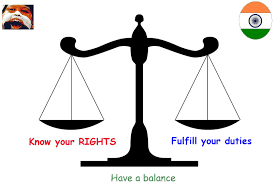 “Every right is married to a duty, every freedom owes a corresponding responsibility.”

It is the basic tendency of the person to fight for their rights and remain silent on their duties. But this does not undermine the relevance of fundamental duties. It helps the person to act as an ideal citizen and never indulge in the anti-national activities. While abiding by the duties, the citizens inculcate and develop the nationalism and the commitment of citizens towards the nation gets enhanced. In nutshell, the fundamental duties can be said as the code of conduct for the ideal Indian citizen the importance of which has been reflected in the following cases.

There is a trend in the existing political and social scenario to certify the nationalists. Unfortunately, the defence of these allegations are given through the fundamental rights by proving that they have the freedom of speech and expression or they have the right to life and privacy but no one devotes even a minute to explain and defend themselves as to how they are fulfilling the duties as the responsible citizen. Here the author does not intend to give validity to the questions posed on someone’s nationalism and patriotism but is throwing light on the another perspective with which the controversy can be seen and dealt with. The only motive is to highlight how fundamental duties are undermined against fundamental rights and the need to balance this difference where we think that the existence of rights against state are more important than fulfilling the responsibilities towards state.

The aspirations of citizens soar high in the sky when it comes to expectations from government, administration, judiciary, media etc. to make the country the best place to reside but the same list misses out the expectations that the citizen should have from himself towards the country.

The Constitution of India is only an attempt to balance between the citizens’ rights and duties.[vi] It is the responsibility of the citizens to fulfill those obligations. Whenever they exercise any of the rights enunciated in Constitution of India then also the consideration must be given to fundamental duties irrespective of the fact that they are not enforceable through court of law in case of its violation.
Therefore the time has come to realize the responsibilities as well as the rights so that everyone can contribute and be accountable for nation’s growth alongwith the state.

There is the need to reflect on the history of country and rationality of the matter. This will help the citizens in realizing the part which is missed by majority of citizens. The small list can be easily prepared where there is display of sheer neglect of fundamental duties by the citizens:
1. Littering is one of the biggest threats to the environment.
2. Spitting is one of the main reasons of the transmission of many diseases and it also degrades the environment.
3. Child labour (My personal experience says that I got to see atleast 1 child working in 5 highway restaurants. The ratio of 1:5 is frightening and I believe that it will be more worst than this.)
4. Loss to public property in mass protests.
The list can be unending but it can be definitely concluded that if the extent of vigilance that the citizens have for fundamental rights is developed for fundamental duties as well then the country will surely reach newer heights.
The citizens have to understand that the citizens make the nation headed by the government therefore the state is not solely responsible for the development of the nation. This realization will help the country to achieve new milestones as everything is possible with public participation.