The Insolvency and Bankruptcy Code 2016 (IB Code) (No.31 of 2016) came into effect on 28th May 2016, with the assent of the president of India that became effective in December 2016. The IB Code 2016 covers the insolvency resolution process as well as the liquidation process for individuals and corporate debtors. 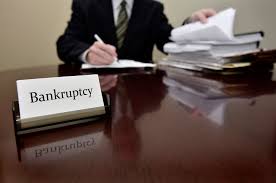 Previously, there were long processes that did not even offer an economically viable arrangement but now, this code is a one stop solution for resolving insolvencies. To provide a single law for Insolvency and Bankruptcy related matters, the Indian Insolvency regime underwent a complete overhaul consolidating several pre-existing laws.
The IB Code now has 255 sections and 11 Schedules and it aims to protect the interests of small investors and make the process of doing business less cumbersome.
The Central Government has constituted 11 benches of the National Company Law Tribunal (NCLT) in different states vide notification dated 1st June, 2016. The

The Insolvency and Bankruptcy Code, 2015 was introduced in the Lok Sabha on December 21, 2015 by former Finance Minister, Late Arun Jaitley. IB Code was thus referred to a Joint Committee of Parliament on December 23, 2015 and is recommended by the Committee on April 28, 2016.
The Code was then passed by the Lok Sabha on May 5, 2016 and by the Rajya Sabha on May 11, 2016 respectively. Subsequently, it received assent from President Pranab Mukherjee and was notified in The Gazette of India on 28 May 2016. Then, it was passed by parliament in May 2016 and became effective in December 2016. And, The Section 243 of the IB Code repeals the Presidency Towns Insolvency Act,1909 and Provincial Insolvency Act, 1920.
After years of battling, the Government ﬁnally brought the Insolvency and Bankruptcy Code 2016 (IB Code) with the aim of achieving a better ranking in the World Bank’s Ease of Doing Business, after acknowledging the situation that there were still a large number of cases where the corporate debtors did not repay their debts.
IB Code 2016 brought in existence by subsuming around 13 existing laws (repealed 2 legislations and amended 11) with the aim of signiﬁcant expansion and accelerating the debt recovery process. In the present situation, creditors (Financial/Operational) have numerous alternatives to recover debts. As, the IB Code now gives an extra alternative to resolve insolvency.

HISTORY OF THE EVOLUTION OF INSOLVENCY AND BANKRUPTCY REFORMS IN INDIA

In general, inability to pay debts when they are due is termed as insolvency. It occurs when the entity’s cash ﬂow which comes in falls beneath its cash ﬂow which goes out. Insolvency can also be deﬁned as ‘‘a state that prompts one to ﬁle for bankruptcy’’. An entity—a person, family, or company—ends up as an insolvent when it cannot pay back its loan on time.
For individual debtors, this implies when their incomes are too low for them to pay off their debts. And For companies, this implies when the money flows into the business and its assets are less than its liabilities.
Bankruptcy is not precisely as same as insolvency. They both are way different. As bankruptcy occurs when a court has determined insolvency, and given orders for its resolution. Whereas Insolvency describes circumstances where the debtor is unable to meet their commitments of repaying debts. Bankruptcy is a legal procedure through which an insolvent debtor seeks relief.

The Insolvency laws in India have their origin in English Law. The provisions that dealt with insolvency law were initially found under subsections 23 and 24 of the Government of India Act, 1800. In 1828, a Statute was passed marking the beginning of insolvency speciﬁc legislation in India. This statute was applied to Presidency towns namely Bombay, Madras and Calcutta. Then the Indian Insolvency Act 1848 was enacted that made distinction between traders and non-traders. The jurisdiction relating to insolvency was transferred to High Courts, limiting its jurisdiction to presidency towns. In 1909, the Presidency Towns Insolvency Act 1909 was passed. Till 1907, there was no legislation dealing with insolvency in non-presidency areas, therefore, in 1907, the Provincial Insolvency Act was passed which was later replaced by the Provincial Insolvency Act 1920. These two legislations continued in force until recently and were repealed by the IB Code.
As ‘‘Bankruptcy & Insolvency’’ is in the Con-current List in the Indian Constitution, both Center and State Governments have power to legislate on this subject. The Companies (Amendment) Act 2003 proposed several changes to the provisions relating to insolvency under the Companies Act 1956. However, these could not be notiﬁed due to legal challenges.
In 2013, the new Companies Act was passed introducing a number of changes in the corporate insolvency procedure most of which could not be notiﬁed for a long time. The Companies Act 2013 also introduced Chapter XIX that dealt with the revival and rehabilitation of sick companies. The idea behind the incorporation of this chapter under the company legislation was to widen the scope of revival and rehabilitation mechanisms including within its scope all kinds of companies unlike SICA that only provided a rehabilitation mechanism for ‘‘sick industrial’’companies. This chapter has now been repealed as the entire revival/rehabilitation procedure or the mechanism of corporate debtors (or sick companies) is now covered under the IB Code.
With the globalisation of the economy, corporate insolvency has attained great signiﬁcance. A need was therefore felt to bring about reforms in the sphere of insolvency laws. The main objectives for bringing about reforms in the laws of insolvency were:

● To restore the debtor company to proﬁtable trading where it is practicable;
●To expand the return to creditors as a whole where the company itself cannot be spared;
● To build up a fair and even handed framework for the positioning of claims and the
● Dispersion of assets among creditors, including a redistribution of rights;
● To give an instrument by which the causes of failure can be identiﬁed and those guilty of
● Mismanagement brought to book;
● Placement of the assets of the company under external control;
● Substitution of collective action for individual pursuits; and
● Evasion of certain transactions and fraudulent conveyances, dissolution and winding up etc.

The present law in force on insolvency and bankruptcy in India has evolved over a period of time after the recommendations and suggestions given by different committees constituted from time to time. Some of the relevant and recent committees are as follows : 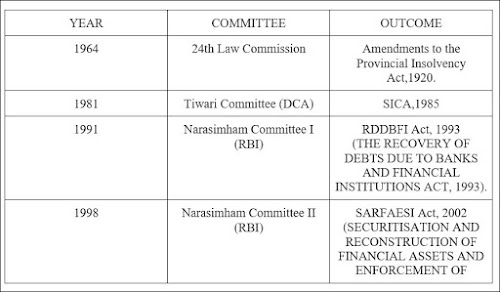 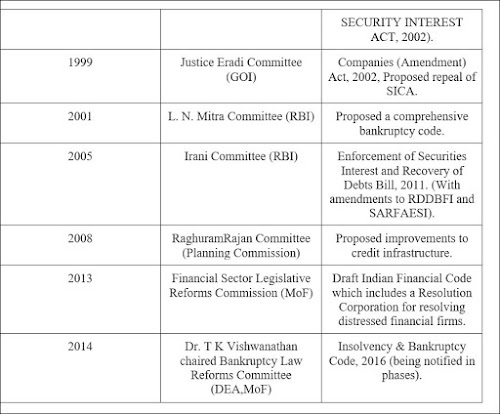 The ﬁrst case in India under the IB Code was ﬁled by ICICI Bank against Innoventive Industries Ltd. The applicant of insolvency resolution process is also required to propose a plan for resolution, however, regardless of the resolution process applicant, the resolution plan requires the sanction of ﬁnancial creditors constituting the committee of creditors.
Another imperative part of the Code is that it gives criteria for establishing that default has been made (under Companies Act 1956/2013, the only criteria given was the inability to pay debts to the corporate debtor) i.e. Rs. 1 Lakh. This gives a chance to the defaulting corporate debtor to think of alternative solutions in the initial phase of default preventing accumulation of default amounts to risky extents.
Secondly, unless totally avoidable, the corporate debtor is kept from defaulting as a result of dread of losing control over the company. This will diminish the frequency of default and swelling of NPAs.
The second case is of Bharati Defence and Infrastructure Ltd against Edelweiss Asset Reconstruction Company which ﬁled an insolvency resolution process in the National Company Law Tribunal (NCLT) under the IB Code to pre-empt winding-up petitions by unsecured creditors.
This step by Edelweiss has been possible due to the repeal of SICA that dissolved the Board for Industrial and Financial Restructuring (BIFR). Though recently, Bharati Defence and Infrastructure (formerly Bharati Shipyard) has been given support by the creditors, led by Edelweiss BSE 0.46% Asset Reconstruction Co, as they have proposed a revival package under the IB Code 2016.

IB Code 2016 has changed the debtor – creditor relationship i.e., the creditor no longer chases the debtor in fact, the case is otherwise. Implementation of the IB Code and the constitution of the NCLT, and its functionality had revealed the need for improvements in the law. The NCLT has now become a trusted forum of high credibility. Those who drive the companies to insolvency, exit from management. The selection of new management has been an honest and transparent process. There has been no political or Governmental interference in the cases.
The functioning of NCLT and the Tribunal has led to a large number of cases being filed. The NCLT is over-crowded, its capacity is now being further enhanced. Realizing the urgency, the Supreme Court has pronounced several judgements expeditiously, laying down the Law on the new Legislative provisions. The law declared by the Supreme Court will go a long way in interpretation and clarifying the ambiguity, if any. This will expedite the process further in Coming days.
Thus, In all the years since its enactment, the IB Code has largely lived up to it’s promise. The National Company Law Tribunals, the National Company Law Appellate Tribunal, the High Courts and the Supreme Court have adjudicated upon matters under the IB Code with unprecedented speed, and have provided certainty on interpretation of key concepts under it. The Insolvency and Bankruptcy Board of India and the Government of India have also been extremely responsive in making legislative amendments to ensure that the Code is implemented in its right spirit. These developments have enriched the jurisprudence and practice of insolvency in the country.

Image Credits
This blog is authored by Sapna Jain