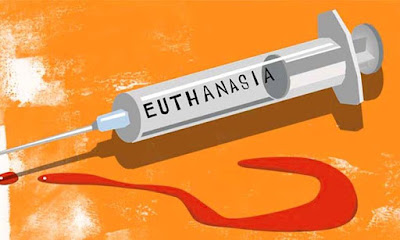 Euthanasia (from Greek: “suitable death”) is the practise of intentionally ending one’s life to relieve pain and suffering. Different countries have unique euthanasia laws. Euthanasia is defined by the British House of Lords select committee on clinical ethics as “a deliberate action conducted with the specific goal of ending a life, to alleviate intractable pain.” Euthanasia is defined as “the end of existence by a medical doctor at the request of a patient” in the Netherlands and Belgium. The Dutch law, on the other hand, no longer refers to euthanasia as such, but rather to the concept that lies beneath the broader phrase of “assisted suicide and end of existence on request.”

C. Killick Millard founded the Association for the Legalization of Voluntary Euthanasia (later known as the Euthanasia Association) in 1935 and began an organised effort in the United Kingdom to legalise euthanasia. The House of Lords rejected the Social Act in 1936, and the House of Lords again rejected a proposal on the same issue in 1950. The American Euthanasia Association was founded in 1938 in the United States. The Netherlands and Belgium were the first countries to legalise euthanasia in 2001 and 2002, respectively. Oregon became the first state in the United States to permit doctor suicide in 1997; nevertheless, opponents attempted to repeal the contentious statute. When the South Korean Supreme Court rejected a family’s plea to remove a brain-dead woman from life support in 2009, it affirmed the “right to die with dignity.” [2]

The Supreme Court of India allowed passive euthanasia and removed life support from patients in a persistent vegetative condition on March 9, 2018. This judgement is part of the ongoing judgement in the Aruna Shanbaug case. Before his death in 2015, he was a vegetarian. The Supreme Court of India affirmed a crucial judicial law permitting passive euthanasia in India on March 9, 2018. After Pinky Virani was found guilty by the Supreme Court, the decision was made. The term “Next Friend” was included in the Constitution in December 2009. This is a historical statute that gives people who see all suffering as “destiny” the right to choose over government, medical, or religious authority.[3]

1.      Some people believe that pain is always controllable, therefore there is no need to sacrifice anyone; unfortunately, this is not the case.

2.      Some people believe that euthanasia is wrong because a “miracle” is conceivable, and that one person will recover. However, making critical decisions in the face of great improbability is frequently foolish. The most intriguing aspect is that euthanasia will never put an end to a miracle, much alone the miracle of origin.

3.      Some people believe that murdering someone intentionally is always wrong, which is why active euthanasia is wrong. In this aspect, while killing is virtually always unethical, it can be argued that it is done because people generally want to live and live pain-free. The murder could be justified, but it isn’t.

4.      Some people believe that there is a significant moral difference between allowing something to happen and acting on it, or between killing someone and allowing them to die. As a result, passive and aggressive euthanasia should be considered separately.

5.      Some argue that allowing active euthanasia will cause the murder of individuals who desire to live. But this hasn’t occurred in instances in which active euthanasia is permitted, due to the fact we’ve and could have controls in the vicinity to mitigate this risk, simply as we do with different matters that would have poor effects if overused.

The goal of euthanasia is to make death less painful for the dying person: the word “euthanasia” literally means “happy death.” These questions are crucial not only for persons who are now facing difficult death decisions. Nobody knows what will happen; accidents or diseases will always cause these issues; therefore, we must think about them more carefully.