The Estoppel is based on the principles of equity, justice and good conscience. Its main objective is to protect the interests of the parties to the suit from deceit and fraudulent acts while promoting goodwill and honesty. Although the Estoppel is the rule of evidence, but it is considered to be a substantive rule of evidence. 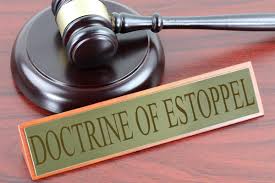 This principle is bound by the representation made by him or rising out of his conduct. Estoppel is the base on the maxim, “allegan contraria non est audiendus” which means that a person alleging contradictory facts should not be heard and is the species of “presumption juri et de juri” it means that the fact presume is taken in to consider to be true against the party stating the same.

The Principle of Estoppel was first time used in the case of “Pickard v. Sears[i] Court held that “a person by his words or any conduct induces to another person to believe a fact and its subsequently acts according to that belief or to alter his previous position, the accused is barred from later changing his position”.

Estoppel deals with in Section 115 to 117 of Indian Evidence Act 1872 and Section 115 of Indian Evidence Act talks about the general principle of estoppel by the conduct, Meanwhile Section 116 and 117 are contains instance of estoppel by conduct. The following are the example of Estoppel in other Acts pf our country – Section 49 of the Registration Act 1908, Section 53,27,41,43,49 of the Transfer of Property Act, Section 24 & 93 of the Indian Contract Act 1872, Section 18 of the Specific Relief Act & Section 28 of the Partnership Act NAT.

The Estoppel deals with the section 11-14 of CPC and Section 40- 44 Of Indian Evidence Act. It is basically concerned with the effect parts of some Judgment on the behalf of records. When the party adduced the record in the present case and they also decided to estoppel the reopen the case. This Principle is not applicable in India but we are generally using the principle of Res Judicate. We have to keep in mind that an appeal is taken into consideration that the case to be a continuation and it will not fall under the CPC (Res- judicata).

When one party has to claim to another party has entered into an engagement by a deed with some certain facts. The estoppel by deed only can be applied between the parties and privies. This principle is not applying to the non- binding and irrelevant of the matter in the case. The most important thing we must need to keep in mind that if a deed is tainted or come under the fraud, no estoppel can arise from it.

3. Estoppel by Pais or Conduct

A man with his words or conduct to believe that another person is given the same facts and act had been aware of his misrepresentation. The principle of estoppels prohibits the man from denying the existence of the same facts. Estoppel by Pais applies, when an agreement, contract act, or any conduct of misrepresenting negligence on the part of the party, and it changes the position of facts by his conduct of the other party.

4. Estoppel by silence or acquiescence-

In the case of Delhi University v. Ashok Kumar[iii] Court held that Where there is an inherent duty of one person to inform the other person of accurate facts and circumstances but remains silent, his failure to discharge this duty will work as estoppels against him. In a scenario there was no duty for the person to speak, no estoppel can be imposed. In the case of Syed Abdul Qadir v. Ramareddy, an ostensible owner (SECTION 41 of TPA deals with Transfer by ostensible owner) sold a property. The person who was the real owner of the land remain silent. His silent acceptance was regarded as an Estoppel.

In the case of Power Control & Appliances Co. v. Sumeet Machines Pvt. Ltd[iv] where the manufacture allowed the use of his registered trade for a long period of time without protest, this amounts to acquiescence, attracting the doctrine of acquiescence.
When a person changes his religion on the occasion of marriage, he will be bound by that new religion because the estoppel applies.

The Evidence Act is not exhaustive of the rules of estoppel. Thus, although S. 116 only deals with the estoppel that arises against a tenant or licensee, a similar estoppel has been held to arise against a mortgagee, an executor, a legatee, a trustee, or an assignee of property, precluding him from denying the title of the mortgagor, the testator, the author of the trust, or the assignor, as the case may be.

This type of estoppel enables a party, as against some other party, to claim a right of property which in fact he does not possess. Such estoppel is described as estoppel by negligence or by conduct or representation or by a holding out of ostensible authority. Such estoppel is based on the existence of a duty which the person estopped is owing to the person led into the wrong belief or to the general public of whom the person is one. (Mercantile Bank. Central Bank, (A.I.R, 1938 Privy Council, 52)

In the case of LML Ltd. V State of Utter Pradesh[v], Court observed that the doctrine of promissory estoppel applies only the conduct of one party to another party to make some changes as if the said represented will be acted upon and provides for a cause of action it need not be necessary to take as a defence.
Section. 115 deals with estoppel by representation by act or conduct, and Section. 116 and section 117 deal with estoppel by agreement or contract.

Illustration: – A intentionally and falsely leads B to believe that certain land belongs to A, and thereby induces B to buy and pay for it. The land afterwards becomes the property of A, and A seeks to set aside the sale on the ground that, at the time of the sale, he had no at title. He must not be allowed to prove his want of title.

The burden of proving the ingredients for estoppels lies on the party claiming estoppel. This doctrine precludes a person from denying the truth of some statement previously made by himself.

Section 116 of Indian Evidence Act[vii]: Estoppel of tenant: and of licensee of person in possession: This section deals with estoppel arising out of relationship between
1. a tenant and landlord;
2. between licensee and licensor.
Tenant: When a person comes into possession of any immovable property as a from other person whom he accepts as the owner and he will be estoppel from questioning the title of the owner.
Licensee of a person in possession: A person who is in possession of any immovable property as a licensee cannot be permitted afterward to say that his licensor had no right to the property.

Section 117 of Indian Evidence Act: Estoppel of acceptor of bill of exchange, bailee or licensee:
Section 117 deals with estoppel in respect of movable property. A based 9 estoppels under this section is based on agreement. The section is supplemented by Sections 41 and 42 of the Negotiable Instrument Act (N.I). It is applicable to:
1) Against the acceptor of a bill of exchange.
2) Against the bailee, &
3) Against a licensee
Acceptor of a bill of exchange: No acceptor of a bill of exchange can deny that the drawer had authority to draw such bill or to endorse it; (explanation 1) but he may deny that the bill was really drawn by the person by whom it purports to have been drawn.
With Bailee or licensee: No bailee or licensee can deny that his bailor or licensor had, at the time when the bailment or licence commenced, authority to make such bailment or grant such licence.
Ex: A garage owner receiving a car for repairs is estopped from challenging the title of the person from when the car was received. But, Under the (Exception 2), If a bailee delivers the goods bailed to a person other than the bailor, he may prove that such person had right to them as against the bailor.

Exception of Doctrine of Estoppel[viii]

An Estoppel is a bar that prevents one from asserting a claim or right that that contradicts what one has said or done before or what has been established as true. It is also preventing the re-litigation of issues and affirmative defence alleging good faith reliance on a misleading representing and an injury or detrimental changes in position resulting from that reliance.