The validity of capital punishment, also called death penalty, execution of an offender sentenced to death after conviction by a court of law of a criminal offense continues to be challenged by civil societies and human rights groups. This article will analyse arguments for and against the relevance of death penalty in the 21st Century. 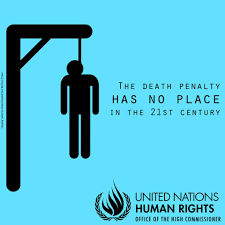 The first established execution laws date as far back as the Eighteenth Century B.C. in the Code of King Hammurabi of Babylon, which codified the execution for 25 different crimes[i]. The execution was also a part of the Fourteenth Century B.C.’s Hittite Code; within the Seventh Century B.C.’s Draconian Code of Athens, which made death the sole punishment for all crimes; and within the Fifth Century B.C.’s Roman Law of the Twelve Tablets. Death sentences were administered by such means as crucifixion, drowning, beating to death, burning alive, and impalement. In the Tenth Century A.D., hanging became the usual method of execution in Britain. In the following century, William the Conqueror would not allow persons to be hanged or otherwise executed for any crime, except in times of war. This trend would not last, for in the Sixteenth Century, under the reign of Henry VIII, as many as 72,000 people are estimated to have been executed. Some common methods of execution at that point were boiling, burning at the stake, hanging, beheading, and drawing and quartering. Executions were administered for such capital offenses as marrying a Jew, not confessing to a criminal offence, and treason.

The number of capital crimes in Britain continued to rise throughout subsequent two centuries. By the 1700s, 222 crimes were punishable by death in Britain, including stealing, lowering a tree, and robbing a rabbit warren. Because of the severity of the execution, many juries wouldn’t convict defendants if the offense wasn’t serious. This lead to reforms of Britain’s death penalty. From 1823 to 1837, the execution was eliminated for over 100 of the 222 crimes punishable by death.

Supporters of execution claim that it’s a powerful deterrent effect on potentially violent offenders for whom the threat of imprisonment isn’t a sufficient restraint. The death penalty saves lives. Would-be murderers have a better reason to think twice if they know their life is on the line. Ultimately, only the foremost severe punishment possible will dissuade the foremost violent crimes. Only then will it be clear that the good guys aren’t messing around, because taking an innocent life would mean forfeiting your own.

An eye for an eye. The execution is reserved for the foremost heinous of crimes, like murder. Why should a murderer be allowed to measure out the remainder of their lives in relative comfort, paid for by the public? To still house, clothe and feed them for the rest of their natural life at taxpayer expense makes a mockery of justice. They gave up their right to life once they took the lifetime of another person, and justice can only be served by their lawful execution. Although the victim and therefore the victim’s family can’t be restored to the status which preceded the murder, a minimum of an execution brings closure to the murderer’s crime (and closure to the ordeal for the victim’s family) and ensures that the murderer will create no more victims. For the foremost cruel and heinous crimes, those that the execution is applied, offenders deserve the worst punishment under our system of law, which is the death penalty. Any lesser punishment would undermine the worth society places on protecting lives.

The execution of a criminal is that it is the best way to provide closure to the family of their victim. They can finally put the crime behind them and advance, knowing that there’s no possibility of the one who took away their beloved one ever leaving prison and walking free.

The death penalty alone imposes an irrevocable sentence. Once an inmate is executed, nothing can be done to make amends if a mistake has been made. You cannot un-execute someone. Miscarriages of justice are bad enough, but the wrongful execution of an innocent person takes it to the extremes. If someone is wrongfully imprisoned they can at least be released and compensated by the state. If they’re executed, however, then a posthumous pardon won’t be much comfort.

In practice, the execution doesn’t single out the worst offenders. Rather, it selects an arbitrary group supported on such irrational factors as the quality of the defense counsel, which is provided by the state because most of the defendants cannot afford to hire good counsels. Hence, they are dependent on the quality of the lawyers assigned by the state, many of whom lack experience in capital cases or are so underpaid that they fail to investigate the case properly. A poorly represented defendant is far more likely to be convicted and given a death sentence.

Too Much Power in the Hands of State

The three countries that executed the most people in 2019 were China, Iran, Saudi Arabia, Iraq and Egypt[iv]. There’s a reason why the execution is favoured in authoritarian regimes: it’s the word form of state control. Troublesome political dissidents are often mixed in with criminals and drug dealers on death row, and any criticism is often deflected as being “soft on crime”. The state cannot create life so it has no right to take away one. If the state has the power to take away someone’s life then it will be too much concentration of power in the hands of the state, which is bound to be misused by the state.

Capital Punishment has always been a part of human civilization in some way or the other. But, in light of new studies, which shows that rehabilitation is better than capital punishment, increasing number of countries are doing away with capital punishment[v]. However, there are still considerable amount of major countries which do have capital punishment and still carry out executions[vi]. There are good arguments on both sides and in the end, any argument concerning capital punishment comes down to your perspective and how you look at the it.

[i] History of Death Penalty Laws, available on- https://criminal.findlaw.com/criminal-procedure/history-of-death-penalty-laws.html
[ii] Should the Death Penalty be allowed?, available at – https://deathpenalty.procon.org/top-10-pro-con-arguments/

[iii] Arguments against Death Penalty, available at http://www.bbc.co.uk/ethics/capitalpunishment/against_1.shtml
[iv] Death Panelty in 2019: Facts and Figures, available at – https://www.amnesty.org/en/latest/news/2020/04/death-penalty-in-2019-facts-and-figures/
[v] Countries That Have Abolished the Death Penalty Since 1976
[vi] Which countries have the death penalty and how many people are executed in the world every year? Available at – https://www.thesun.co.uk/news/2525739/countries-death-penalty-how-many-people-executed-world/
Image Source
Author: Nadeem Siddiqui