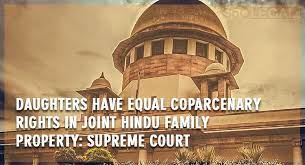 What does the word ‘coparcenary’ mean?

The word coparcenary means a smaller unit of the family who jointly owns property i.e., the property which is owned by the family altogether.  The word ‘coparcenary’ included only those people who had birthright over the property which included people only till the 4th generation before the amendment that took place in 2005. Also, the concept of coparcenary used to come to an end with the death of the last surviving male successors. A legal concept named; Hindu undivided family is recognized by the Hindu property Act. This means a family of persons who are descended (linearly) from a common ancestor and related with each other by birth or marriage.  This concept has differences between coparcener and members. Wherein, males are seen as only coparcener and females as members. There’s a statement, all the coparceners are members but vice-versa is not true, holds.

Therefore, we can conclude that only those male members of a Hindu joint family who had an undivided interest over the ancestral property gain coparcener-ship. The aforesaid means, the head of the family or the Karta and its three following generations which includes his sons, grandsons, and great-grandsons are his coparceners.

The concept of Daughters being coparceners

From the introduction, we can easily assume that the concept of coparcenary biasedly differentiated between males and females, rather the idea of females being a coparcener was neglected.  The Hindu Succession Act 1956, dealt with these concepts but has undergone huge amendments since then. The law previously was known for its gender discrimination and also for its diversity since the country sees variations in its practice in various countries due to the differences in prevailing customs.

Other laws prior to the Hindu Succession Act 1956,

Two other laws were before this act, The Hindu Law of Inheritance Act, 1929, and the Hindu Women’s Right to Property Act, 1937. The latter was considered landmark legislation conferring ownership rights of women. Though this act came in after much voicing of discontent of women’s rights over the unsatisfactory condition of women’s rights. This act took into account the rights of widows and divorcees. Even though conditions of women were considered but it was not enough to achieve the target of gender equality.

The evolution of Daughters as coparceners,

The Hindu Succession Act 1956, was revised and focus was made on providing equality as stated in Article 14 of the Indian Constitution. The Hindu Women’s Right to Property Act provided an idea of the limited estate of women which was abolished by the introduction of this act. By this act, the position of women in society was uplifted and provided them the right to inherit the share of their father’s property.

Daughters were declared as legal heirs of their fathers since they received the right to inherit their father’s property on the virtue of notional partition. Even if this right was given, it still was the sons who legally inherited a property owned by a joint family. Therefore, this act too continued with gender inequality but at a slower pace.

It was quite evident that the laws formed on this topic were suppressive towards gender equality, which needs to be modified as soon as possible considering the needs of a challenging society like ours. Few changes were further made until in the year 2000, the report of the law commission pointed all possible clauses which supported bias towards the males and demanded the changes accordingly.

This law was put into action with the aim of expanding the rights of women irrelevant of their status and circumstances. This law brings them to par with the male members of the family.This law followed all reports presented by the commission in the year 2000. This law assured a woman that she gained coparcenary rights and also the liabilities equal to that of a son. The amendments not only limit itself with the rights but also make sure that a daughter becomes liable for the debts and the losses too in addition to the property shares and other rights.

Section 6 of the Hindu Succession Amendment Act, 2005 has challenged the fundamental principles of the earlier Hindu Coparcenary law. This amendment made sure that daughters whether married or not will be given rights equivalent to that of a son on the matter of coparcenary rights. It is also mentioned that females of any joint family are also eligible to be a Karta now. Any reference made to a coparcener would easily and obviously include daughters as well.

Properties entitled to a woman by inheritance by her would-be under coparcenary ownership will not be disposed of by testamentary disposition. A complete fair chance of equality even after her death at par with a son is still not been provided herein. But the fact which is clearly mentioned is in the matter of intestate succession, properties that are inherited by a woman from her father would return back to her parental kin and not her husband’s family and also the vice-versa.

There have been significant benefits for the female community after the amendment of this act and their status improved in the societal structure. In today’s circumstances, these benefits flourished and evolved the society towards betterment.

At present, all the daughters of the family are accepted as coparcenary owners of the joint family property and ownership rights equivalent to that of a son. Unlike in the past times, they are not dependent on their male counterparts. They have an option to rightfully avail themselves of their rights provides them with an economic foundation that boosts their confidence. Also, women of the family can acquire the status of a Karta or the head of the family breaking the stereotypes.

In this case, a claim for partition and separation of share in the father’s property was made by Phulavati, the female counterpart. While the case was pending, the amendment came into action and the issue was this was retrospective in nature or not. The Hon’ble Supreme Court held that daughters will be given equal coparcenary rights on and from the commencement of the act irrespective of the father being alive or not. This provided clarity on the matter that the amendment is prospective in its application which says that the right would be available to the daughters alive or the coparceners existing.

Here, in this case, leaving behind 8 heirs, 5 sons, and 3 daughters Rajaram passed away. This person’s property was devolved on the basis of intestate succession. His property was shared amongst 8 persons and was held that 3 daughters would be also considered as coparceners by means of a notional partition. Also, these notional partitions would also take place in case of the death of the above-mentioned female heirs.

In this recent case, the apex court ruled out that the rights of daughters as coparcenary flows in by their birth and not by any other factors like the existence of their fathers while the amendment comes into action or not. In other words, the Supreme Court rejected the common misinterpretation that daughters alive would only be a part of the property devolved and not otherwise. The reason put up was that according to the Mitakshara law, coparcenary rights are given on the basis of birth and not by any other factors. This was held to be a landmark judgment by the Supreme Court correcting all the measures of female coparcenary rights.

There have been various laws in India which have been backed by a patriarchal mindset. Despite equality being a fundamental right, gender equality was far away from reality. By the Judgement of Vineeta Sharma Vs Rakesh Sharma & Ors, the Supreme Court rightly corrected the misrepresented fact that sons were always preferred more than daughters. The confusion regarding the retrospective prospect of the application of the 2005 amendment came to an end by this verdict. Though a lot more to go, it can be assumed that gender equality is achieved on the matter of succession and inheritance rights. The concept of gender neutrality will only come into a true sense when these rights will be exercised by the transgender community as well.

This blog is authored by Shruti Tarafder, a student at the University of Engineering and Management, Kolkata.