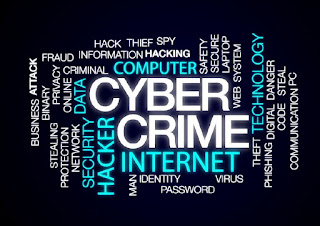 “Cybercrime is a type of crime that is completely illegal against anybody with a criminal intent. Willfully harming the victim’s reputation, either directly or indirectly, through the use of current digital networks, as well as causing bodily or mental harm to the victim.”

Cyber crime: A form of crime that includes a computer and a network is known as computer-oriented crime. When sensitiveInformation is either intercepted or made public, whether legitimately or illegally, there are several privacy issues. In the current situation, cybercrime crosses international borders from different countries. According to a research conducted by the Center for Strategic and International Studies (CSIS) in collab with McAfee, cyber crime costs the economy $ 8 billion per/year.

A cyber terrorist is someone who poses a threat to a government or organisation over the internet, or uses computers and information technology for political purposes to generate widespread fear in society. Individuals or groups inside the network are targeted for hacking. That compiles data on instilling terror in individuals, demonstrating authority, destroying people’s life, i.e blackmailing, robberies, and more.

When malevolent hackers threaten a website or e-mail server with repeated denial of service or other assaults, this is known as cyber extortion. In exchange for money, these hackers promise to cease the assaults and provide “protection.” According to a report by the Federal Bureau of Investigation, cyber criminals are increasingly targeting business networks and websites.

The purposeful assault of information systems for strategic or military goals using computer technology to impair a state’s or organization’s activities This sort of crime is committed by a distinct set of offenders.

These are relatively new offences. This sort of crime is primarily carried out via computer software:

In the twenty-first century, India’s computer crime is fast growing. The IRS and technical support scams are two of the most common sorts of extortion schemes that are used to extort money from their victims.

In India, cybercrime cells have been created in major cities :-

Computer-related offences. Any person who undertakes any conduct listed in section 43 dishonestly or fraudulently can be sentenced to two to three years in prison or fined. Which might rise to five lakhs (five lakhs) of rupee or both.

Using a password, electronic signature, or other unique identifier created by someone else without their permission is punished by up to three years in prison, with the potential of an extension.

All of the sentences were meant to run together.The defendant was sentenced to life in jail in Chennai’s Central Jail after paying a hefty sum of money. It is considered to be the first conviction under Section 67 of the Information Technology Act of 2000 in India.

HOW CAN INDIA PREVENT CYBER CRIME?

In India, cybercrime is defined by the Information Technology Act. In India, you may begin creating strong passwords by using private mode on social networking sites. The following are some more preventative measures:

Since the dawn of the technology era, India has seen a significant rise in cyber crime. You may actually hear many scams and other computer crimes commited every day. In India, there are multiple forms of cybercrime that are already specified by the Information Technology Act of 2000, indicating various forms of offences.In India’s major cities several cyber crime units have been created to comply with the Cyber Crime Act. With the progress of technology, there has been an upsurge in recent occurrences of cyber crime in India. Many crimes, such as abduction, fraud, hacking, and data theft, are now carried out through the internet. Hackers are a term used to describe criminals who engage in such actions. The IT Act is used to track many incidences of cybercrime in India. Today, everything is done online, including shopping, ordering food, playing games, and paying bills.