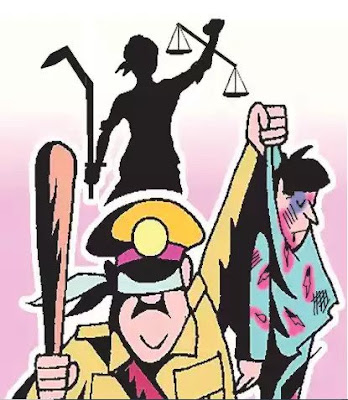 The framer of the Indian National Anthem, Gurudeva Rabindranath Tagore dreamt of a world “Where the mind is without fear and the head held high” for every citizen of the globe. Similarly, the founding fathers of the Indian Constitution too held the right to life and liberty at the highest pedestal of human rights and enshrined them under Article 21 and 22 of the Constitution thus giving birth to the sacrosanct Right to Life and Personal Liberty. Moreover, at many instances it has also become the responsibility of the state to ensure that the personal right to life and liberty of the citizens does not get violated at any cost and hence assumes the role of savior of human lives.

However, the recent trends of custodial violence and ill-treatment often meted out to the criminals, accused, jail inmates and sometimes even the complainants by the police forces often leads to standing of this belief on a slippery moral and legal grounds. There have been numerous incidents pointing out to this illegal and immoral act of custodial violence and torture in the recent past, the most infamous of them being the recent case of Resham Singh v. State of U.P, the gruesome custodial murder of Jayaraj and Benix and many more.

UNDERSTANDING THE MEANING OF CUSTODIAL TORTURE

Though the phrase “custodial torture” does not find a direct reference in any statute or law of India, various legal dictionaries define custodial torture or violence as an act of using force or inflicting pain in immediate charge or control of an authority. According to Section 167 of the Code of Criminal Procedure, custody can be classified into two parts, depending upon the power of the magistrate which are: –

According to section 167 Cr.P.C, the police custody of an accused can only be given for a maximum period of 15 days thereafter the person is sent to judicial custody under which he remains for the time till he gets a bail. The custody of an accused begins the moment he is arrested and continues till his release, either in form of bail or acquittal from the case. Custodial violence is the infliction of force, either in form of exerting physical pressure or in form of mental harassment of a person in custody of the police or in forms which may cause death, rape or hurt to the victim.

According to the judgment passed in the landmark case of D.K Basu v. State of West Bengal, the apathetic phenomena of custodial torture is not a peculiar feature to India but is a menace all around the globe with new cases of torture being reported everyday in different parts of the world. Thus, custodial torture has a naked violation of human rights and leads to death of human personality and dignity by a thousand cuts. Whenever such incidents of infliction of deep harm on human dignity take place, the civilization takes a step backward and the leads to violation of Article 21 and 22 of the Indian Constitution which hold a place of pride in the Indian Constitution.

Custodial violence which, at many instances leads to death or grievous hurt to the victims and scars their mind for the rest of their life is one of the worst malediction upon the sacrosanct rule of law and is one of the biggest contributors to the death of inmates in jails or those who are kept in police or judicial custody apart from other factors like malnutrition, diseases or other problems. According to a recent report by national Campaign against Torture, a NGO committed towards curbing the menace of torture in India, nearly 1,731 people lost their lives to custodial torture in the year 2019, a totally unexpected figure in a democracy which guarantees it’s every citizen the basic right to live. In the year 2020, which marked the onset of the deadly COVID-19 saw nearly 5 custodial deaths every day, the highest coming from the state of Uttar Pradesh.

Though nothing can justify the heinous act of custodial torture meted out to victims who are clearly in no position to defend themselves, there exist a variety of causes due to which crimes like these take place.

First of all, India since ages has witnessed a very miniscule level of curbing the power of police forces in India and the legislations and rules already give them high level of powers which lead to an autocratic mindset of police officers and feeling of entitlement to the use of force to discipline the accused. The colonial mindset has also led to the belief among police officers that only the “rule of stick” can deter the criminals or accused from not repeating the offences committed by them. Moreover, due to a huge level of paperwork involved in taking up pity matters to the court and ensuring that the guilty get adequate punishment, the guardians of law and order at many instances take up the law in their own hands and themselves try to administer justice, something which they are not trained and allowed to do. Taking this into cognizance, Hon’ble Justice Krishna Iyer rightfully remarked that “Who will police the police?”  indicating the need of the hour to have a regulatory body to monitor the functioning and administrative system of the police forces in India.

Other than that, a plethora of other factors like rampant corruption in the police machinery, overworked and understaffed force, lack of proper training in interrogation and public dealing techniques and political pressure which add fuel to this already raging fire. Many a times using third degree torture or use of muscle power is seen as a right by the police officials in order to extract information or make the accused give statements forcefully. This results in a very low credibility of the statements made or confessions given under a police custody and hence they are not admissible in the court of law under Section 25 of the Indian Evidence Act, 1872 and hence confessions made to a magistrate are only admissible to the extent of Indian Evidence Act under Section 164 Cr.P.C.

The Indian Constitution has always stood as a wall to protect and nurture the basic human rights of every citizen in India and hence various provisions exist in the constitution to safeguard the citizens from custodial torture. The constitution aims to safeguard the rights to life and liberty of citizens through articles 20,21 and 22 of the Indian Constitution. Moreover, by setting up the NHRC in 1993, a huge step has been taken towards embodying the principles of right to human life guaranteed in the constitution and setting up of rules and guidelines for ensuring that no violation of human rights takes place and setting up procedures involving regular checks on conditions of human rights in the country along with taking up matters where violation of human rights have taken place to the relevant authorities.

Various welfare guidelines have been set up by NHRC, one of them being compulsory reporting of any case of custodial death which takes place within 24 hours of its occurrence so that proper enquiry and post mortem of the victim, which may help establish the primary cause of death may be established. Moreover, it makes sure that D.K Basu guidelines are followed by the police in letter and spirit so that no right of the undertrial is violated.

There have been series of landmark judgments where it has been proved that the crime of custodial violence is a direct attack on the dignity and life of citizens and cannot be tolerated at any cost. In Joginder Kumar v. The State of UP, it was held that the police or any other authority cannot arrest any person merely on the ground of suspicion and reasonable grounds along with proper evidence should be made available before arresting anyone. Also, it was noted that the arrested person should be made known of the reasons of his arrest and also should have the right to inform his family, friends or relatives about the details of his arrest. Moreover, it also becomes the responsibility of the police to record the entire details of the arrest in their police diary and the magistrate to ensure proper functioning and adherence to these rules and regulations.

In Nilabati Behera v. State of Orissa, the state was held responsible for the death of a young man in police custody when his mother appealed before the High Court demanding compensation for her son’s death along with stringent punishments for the accused police officials. The hon’ble court granted Rs. 1,50,000/- as compensation to the mother of the deceased and held that the state can also be held liable for actions of police officials which result in death of an accused in police custody.

The belief in these judgments is further strengthened by Article 5 of Universal Declaration of Human Rights which states that “no one shall be subject to torture, cruel inhuman or degrading punishment”, thus to ensure that reformative form of punishment is followed which has positive impact on both the society as well as the accused or criminal so that he can life a proper dignified life after he is released or acquitted.CONCLUSION

There have been various instances of custodial violence across the country where many innocents have suffered grievous hurt, bodily harm, rapes or even lost their life. However, a number of laws and welfare legislations have been enacted in order to strengthen the criminal trial and justice system so that no harm occurs to both the arrested person and life and liberty of everyone is equally respected.

Now the responsibility of eradicating this menace of custodial torture rests on three shoulders namely – the legislature to enact and enforce needful laws and implement stringent punishment to those who violate it; the judiciary to grant strict punishment to violators of these laws and we, people of India to take suitable actions in form of generating awareness among the less educated section of the society about the rights they hold so that no one has to go through such ill–treatment throughout his life.