The Medical Termination of Pregnancy (Amendment) bill, 2020 was passed by the Lok Sabha on March 17, 2020. The bill seeks to amend the Medical Termination of Pregnancy Act, 1971 and increase the upper limit of legal abortions to 24 weeks for special categories of woman.
Union Health Minister Harsh Vardhan stated that the proposed bill seeks termination of pregnancy in cases involving victims of incest, rape survivors, minor girls, differently-abled girls or in case of a pregnancy that has a substantial foetal abnormalities. 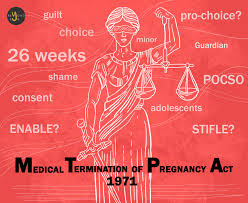 The Union Cabinet had approved the Medical Termination of Pregnancy (Amendment) Bill on January 29, 2020 under the chairmanship of PM Narendra Modi[1]. The right to life and personal liberty as guaranteed by Article 21 of the Constitution would be interpreted in such a way to include the “Right of Abortion”.[2]
Salient Features of the Amendments:
Why this Amendments is required?

This delays the decision-making process for termination of pregnancy.

Pros of this Extension:

Issues related to the Extension:

Viability of the foetus:

Though Medical Termination of Pregnancy (Amendment) Bill, 2020 is a step in the right direction, the government needs to ensure that all norms and standardised protocols in clinical practice to facilitate abortions are followed in health care institutions across the country. Along with that, the question of abortion needs to be decided on the basis of human rights, the principles of solid science, and in step with advancements in technology.