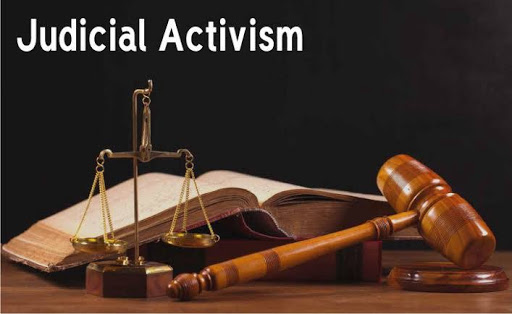 Assertion of Judiciary and its influence is referred to as judicial activism. It has also been defined as an overzealous judiciary. A criticism that we frequently hear about judicial activism is therein present in the name of portraying the provisions of the Constitution. Hence, the statements are that the judiciary very often rewrites them without clearly stating so. In this process, some of the personal views of the bench metamorphose into legal doctrines and constitutional values.

Another criticism in the name of judicial activism is, the theory of separation of powers is being conquered and the judiciary is destabilizing the authority of the legislature and the executive by intruding upon the spheres which are set aside for them. The active role of the Indian Judiciary, specifically that of the Supreme Court has been acknowledged by both the interior as well as the exterior parts, i.e. the countries of India. The independence which has been ensured through the constitutional provisions in support of the judiciary has afterwards strengthened the judicial interpretation that has contributed in the present status of the Indian judiciary. Yet, in this sphere of judicial activism, there are also a few misconceptions which need to be understood properly in order to welcome the activist role of the judiciary in India.

Furthermore, the term ‘Judicial Activism’ or ‘Public Interest Litigation’ has completely changed the functioning of the courts. The judiciary has been assigned this active role under the Constitution where it defined the ‘PIL’ or ‘SAL’ (Social Litigation) as a product of Judicial Activism. It means that the judiciary on its own wants to take up cases where it feels public interests are not maintained properly. In a country like India, there are several social mal-practices like untouchability, pollution, etc. Meanwhile, the judiciary thought that as a part of the society it had the duty to look after such problems.

A ‘PIL’ is a request before the court to investigate a matter which ensures social welfare and improvement. Sometimes, people who are suffering from a particular problem may not be able to file a case in the court of law because of their monetary problem or lack of awareness. The legal doctrine under this is that no one except the pretentious person can approach a court for a legal medication on the fields both in respect of the private and public law adjudications until it was subdued by the PIL wave. However, PIL can be then filed by any citizen on behalf of the troubled person because we can find that through the PIL, the court has increased the role of judiciary in the society where it has also encouraged the common citizens and NGOs to file petitions on behalf of the suffering populations.

Further, the certain aspects involved in the role of judicial activism, it makes us a sense equally regarding its number of consequences as well as its demerits. Hence, some of the consequences are –

• It has democratised the judicial system by giving a right to all people to approach the court.

• Judicial Activism has forced executive accountability, and because of the active judiciary the Ministers as well as the Government Officials have to do their duty properly.

• The court has asked the candidates who contests election to disclose their income and assets before the general people of the country so that people can know whom they are electing.

Certain demerits of Judicial Activism are –

• It has over-burdened the courts.

In the case of Dr. Ashwini Kumar vs. Union Of India Ministry of Home , the honourable Supreme Court held that, in provisos of the aforesaid edicts in the case, legal jurisprudence has developed only if compensation for the unconstitutional deprivation of basic right to life and liberty as a public remedy as well as to assert private law for reimbursement by tortuous acts of public servants. For grant of compensation, therefore, measures under Article 32 or 226 are entertained when infringement of Fundamental rights granted under Article 21 was established. Notwithstanding refusal of the prayer made by the applicant in this case, the bench clarified that this would not be in any way distressing the jurisdiction of the courts to deal with any individual cases of alleged custodial torture and pass suitable orders and directions in accordance with law.

Judges must be sometimes watchful and sometimes audacious. They must respect both the customs of the earlier period as well as the expediency of the present judges must reunite liberty and authority. Unbiased, autonomous and positive justice is the foundation of the competence of the government. Supremacy is the prerogative of the legislature for being a prevalently nominated body of the people. The executive is accountable for the proper enforcement of the laws which are made by the legislature. But when the legislative body does not bother about the rights and liberties of the individuals and the executive becomes unconcerned about the matters of implementations of the law, then the judiciary remains the only way out to act as the mechanism of social welfare to safeguard the justice for every citizen in the various spheres of their life, no matter whether it is child labour or human rights. Hence, judicial activism is nothing but a prolonged role of the judiciary as it encompasses a vicinity of the legislative vacuum. It is an effort to rejuvenate the system through the provisions of simple and inexpensive access to the citizens.

Judicial Activism has contacted much appealing in every part of our life. Be it the illustration of entrenched work, prohibited detainments, torment and sadism of ladies, the practice of various activities of the constitution, environmental issues, wellbeing, sports and so on and so forth the courts took within reach each of the cases and set down diverse decisions to secure the basic rights of every single human beings of the society. Be that as it may, the government officials and some constitutional specialists censure judicial activism and then again the legal counsellors and community has invited it with warm hands. It is very important to take a note of it that Judicial Activism has such a large number of merits yet, it has certain demerits. Here to note such points we can’t lead the legislative body over the judicial premise as it were. Judicial activism has been admonished by numerous commentators, expressing that it is violating the decree of separation of intensity. Be that as it can, as judiciary being the protector and watchman of rights and last performer of the Constitution, it has vested with a great aptitude to strike down the various activities of the Constitution and existing laws. At present judicial activism has been all around largely by making use of India in order to explicate the various existing laws and constitutional arrangements. Judicial activism in India when stimulated with different nations of the world, at that time it was extremely ground-breaking and was acknowledged by generous sections of the society. Therefore, to accomplish its mission the judiciary has to exercise and develop its jurisdiction with courage, creativity and circumstances and with vision, vigilance and political wisdom in order to maintain a proper and adequate balance between of its working.