Marriage in India is a crucial social institution performed two individuals who get connected as husband and wife, which is recognized under the law . It is considered as an important social function and several rituals are performed together and after that, each spouse will get into a determined role. To make their married life successful, each make small sacrifices. Each and every girl has a dream to get married and to live in a sophisticated life. Thus, every parents make a wish that their daughters must get married to an abroad citizen. By the term “dream come true” some marriages are held with an abroad citizen. These marriages are considered as Non-Resident Indian Marriage (NRI). This paper will deal with the several problems faced by helpless brides in an alien country. 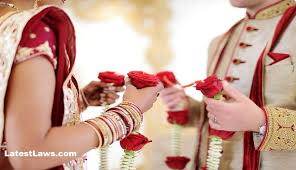 ‘NRI marriages’ generally means a marriage between an Indian citizen and an Indian citizen who is residing in foreign country either as Indian citizen(he would legally be a NRI) or as citizen of that other country (he would legally be a Person of Indian Origin- PIO). The Indian families started fancying the word ‘abroad’ as the epitome of happiness. The parents wish to get their children married in a foreign nation just to raise their status in the society, and forget to think about the drawbacks.

The main problem faced by an Indian women is

§ Firstly, she gets married to an alien nation with no proper safeguards

§ Secondly, she faces language barrier and has no communication with others.

§ Thirdly, after their ‘Honeymoon’ she is deserted by her NRI husband before moving to her husband country.

§ Fourthly, the husband is already married to an another NRI citizen.

§ Fifthly, she is assaulted ,abused both mentally and physically, ill-treated and forcibly sent back.

§ Sixthly, she is brutally harassed by her in-laws to do all house works as servant and demand for huge dowry before or after the marriage and in some cases the child is separated and their custody is brought against her

§ Lastly, she gets into marriage with false information and denied maintenance in India that the marriage was already dissolved by the court in another country.[1]

OTHER ISSUES AND CHALLENGES UNDER NRI-MARRIAGES

When they leave their wife in lurch along with the child, in order to marry another NRI women or to escape from the responsibility, such marriages are called as ‘Run away marriages’ or ‘Holiday-wife-syndrome’.

Culture of mother-nation is far different compared with another nation. They do not discourage splitting of marriages. Obtaining divorce is one of the most important issue in India and cannot be claimed as easily as in a foreign nation.

After reaching her NRI husband’s residency, she comes to know that her husband is already a married man with another NRI women ,with whom he continues to live. In the case of Dhanwanti Joshi Vs. Madhav, here the wife found that her husband was married to another women and left her husband. Thus, the Hon’ble Supreme Court held that the child who was 35 days old ,shall stay with the mother subjected to the visiting rights.

When Indian women seek to claim relief in India, it is very hard to bring back their husbands and in-laws to punish them for dowry-harassment, ill-treatment and brutal abuse. On the other hand, she travels to a foreign country and gets married in same country and discovers later that Indian Courts have very limited jurisdiction to deal with such cases.

Law Commission of India in its 65 Report has stated the domicile of women determined from her husband with the spirit of our Indian Constitution. Our Constitution doesn’t permit dual citizenship or dual nationality except in case of minors.

In many sham marriages, the children are separated from their mother though the children need special care and protection. As far as child custody is concerned, the role of their mothers in past towards their children in order to take care of the basic needs such as their education, health, clothing and extra-curricular activities especially in case of girl child. As per Hague Convention, the child who are wrongly taken or restrained from their mothers are to be returned promptly to back their countries. In the case of Karan Singh Bajwa v. Jasbir Singh on 3rd Sep 2012, the Hon’ble High Court of Punjab and Haryana held that in the case of child custody would be decided on the basis of welfare of child because their future is considered as paramount.

To overcome these issues there are some specific laws applicable for deserted women by their NRI husbands such as,

v Any other personal law governing the spouses.[2]

INTRODUCTION OF NRI-MARRIAGES BILL IN PARLIAMENT

The women with high expectations get married to NRI husbands, and after moving into their husbands residency, they are tortured, abused and they are dragged to do all household work as like servants. They are abused by their husbands in the alien nation. Past several years, there have been thousands of cases regarding NRI-MARRIAGES. Therefore, External Affairs Minister Sushma Swaraj on 11 Feb 2019 introduced a bill on Registration of Marriage of Non-Resident of India in Rajya Sabha. The bill is an outcome of a join initiative of the Integrated Nodal Agency(INA), the other members of INA are Ministry of External Affairs, Ministry of Women and Child Development, Ministry of Home Affairs and Ministry of Law and Justice. The main aim of bill to support the abundant women’s and to claim child custody and also to protect them against exploitation by their NRI spouses. The bill mainly deals with following three steps,

Ø Registration of Marriage by Non-Resident of India

Ø Amendment of the Passport Act,1967

Ø Amendment to the Code of Criminal Procedure,1973.[3]

The Ministry of Women and Child Development in the year 2018 states that all NRI marriages solemnized in India should be registered within seven days and if the marriage is solemnized outside of India it must be performed before the Marriage officer, who is the one among the diplomatic officers in a foreign country. If they fail to register, then the passport and visa would not be issued and after that, several decisions by Law Commission has recommended that the time limit to register is within 30 days from the date of the marriage. According to the recommendation of National Commission for Women(NCW) to keep an eye on arrival or departure of NRI husbands and prevent them to leave India.[4] In India, a marriage certificate is a legal proof that two individuals are connected as husband and wife so they are allow to claim various rights which is recognized under the law and if the case, the marriage was not registered its very difficult to prove its validity. The committee has also recommends that NRI marriage registration from should include the require details and proof of each spouse passport, foreign visa, address and employment.

Ø Amendment of the Passport Act,1967:

If the proposed amendment bill comes into effect it will direct the Indian Ministry of External Affairs to impound or revoke the passport or travel documents of NRI husbands in case of not registering his/her marriage within 30 days. The government rolled up the sleeves to amend the Passport Act of fly by night by the NRI husbands in sham marriages.

Ø Amendment to the Code of Criminal Procedure,1973:

The bill has amendment the CrPC to include this clause:

86A. (1) Notwithstanding anything contained in this Code or any other law for the time being in force, where a person summoned by a Court under this Code and the Court is satisfied that the summons issued could be served, the Court may issue summons along with the substance of the information by uploading on the specially designated website of the Ministry of External Affairs of the Government of India and such uploading of the summons shall be conclusive evidence that the summons has been served against that person.[5]
Explanation: The proposed amendment contended that if any summons or warrants are issued through the specifically designated website of the Ministry of External Affairs he/she should present before the court that if the summons cannot be served in person it can be uploaded in MEA website. If the person doesn’t appear he will be framed as an ‘Proven Offender’. It also provides to attachment of properties of the offender both movable and immovable.[6]

“ The natural ambition of women is through marriage to climb up, leaning upon a man, but those days are gone. You shall be great without the help of any man, just as you are.”[7]– Swami Vivekananda.
Every Indian women and as well as their parents have a wish that their daughters can get settled in abroad and live a good life and at the same time to show off their status in the society. If any Indian bride gets married to an NRI groom, safety measures should be taken into consideration before they have been trapped into the worst situation because “All the glitters are not gold”. The solution to overcome these fake marriages- they need to check whether he is actually an NRI citizen and has proper documents, not give their consent for a sudden marriage, also have proper communication with the NRI spouses and to their in-laws. Thus, for these issues there are some specific laws mentioned above- for women deserted by their NRI husbands, so that every Indian women can live a dignity life as they dreamed.

This blog is authored by- Jannathul Fathima. I

3 thoughts on “Challenges faced by women under NRI marriages”