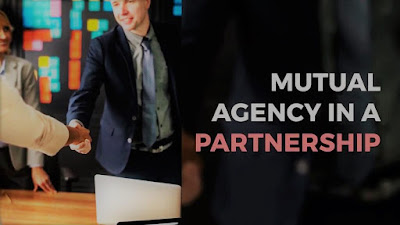 The original name of the case: Cox V. Hickman

Sitting judges of the case: Lord Cranworth and Lord Wensleydale

This is an example of one of the key elements of partnership-Mutual Agency. Mutual Agency Evidence cooperation is conclusive proof. In Section 18[1], the “partner is a representative of the company for the company.” They operate as agents as well as directors and have the unrestricted ability to bind.

What is the mutual agency in The Partnership Act, 1932?

The mutual agency is the partnership’s legal relationship, with each member having authorization rights and the authority to conclude commercial contracts with the partner. This means that every partner in the partnership is the agent in the company and authority for taking business choices committing or binding, as a whole, to an agreement between itself and a third party or organization.

Only partners operating in the usual scope of business activities and transactions have mutual agency. A retail clothing partner with an agency, for example, would not be allowed to contract other partners to buy an investment property since it would not be in the usual company operation.

On the other side, one of the retail partners might buy products from a supplier and demand partnership payment for the products. This transaction is part of the company’s usual activity.

Under the name of B Smith & Son, Benjamin Smith and Josiah Timmis Smith were active as iron and maize tradespeople. They owed the creditors a lot of money and there was a meeting, including Cox and Wheatcroft. More than six-sevenths of the number and value of the debtors performed a deed of arrangement. The trusts have been listed and the rental period is 21 years. The company was to operate under the name “The Stanton Iron Company.” The deed also contains a clause preventing the Smiths from prosecuting the current debts. After six weeks after which no trustee was appointed, Cox had never functioned as trustee.

Hickman produced 3 bills of exchange that were accepted but not honored by the firm. The products were supplied for the business.

The trial was initially brought before Lord Jervis, who ruled for the accused. The action was taken before the Exchequer Chamber in which three judges wanted the judgment to be upheld and the remaining three reverted it.

What were the issues?

Whether the merchants who were essentially the creditors of the company are in partnership?

Contentions of the case

¾    There was no action, as though Hickman had heard that the trustees were Cox and Wheatcroft, that Cox was never a trustee and Wheatcrofte had resigned. The appellants were never brought to justice.

¾    The Smiths owned and owned the partnership never altered.

¾    No individual becomes a partner in a qualifying benefit from trade. There is no collaboration here until the gains are taken.

The defendant can only be held responsible if:

¾    Allowed another person to place their name on the bill

¾    The power was held by himself

·         He is not responsible for the first and third points. The second point is that until an agency is proven, the defendant cannot be held accountable.

·         The defendant is responsible for demonstrating that the complainant is a partner.

Mode of the existence of a partnership. —The true relationship between the two parties, as evidenced by all relevant facts taken together, should be considered when deciding whether or not a group of individuals is an enterprise, or whether or not a person is or is not a company partner.

Explanation 1.These people do not themselves form partners by sharing profits or gross return on the property by others with a shared or shared interest in that property.

·         Example: Two persons are co-owners of a house in a lawsuit. Every month they rented the house and paid the rent. This does not form a partnership.

Explanation 2. The person who has received a share of the company’s profits and a payment contingent on profit or which vary in terms of profits earned by an enterprise does not make him/her a partnership with the companies, and in particular, the person who received that share or payment.

¾    A person who has given money to a partner or company engaged in an enterprise may offer a share in the profit, rather than or in addition to the money he has provided. But owing to such a percentage of revenues, he will not become a partner.

¾    A business servant/agent may get, in addition, or place of the ordinary pay, a share of the company’s earnings. But that doesn’t make him a company partner.

Example: A is an assistant at a broker’s company and receives a percentage of its earnings beyond its wages. Sometimes, on behalf of the company, A also signs certain letters and papers. A is simply an agent of the enterprise, though, and is not only a partner because he has a stake in the profits. (This is comparable to Mc Laren Morrison vs. Verschoyle[3])

¾    The widow or offspring of a dead partner often get an annuity share in his profits. The widow or the descendants of the company are not partners.

¾    A portion of earnings may be provided in return to a shareholder or the former owner of an enterprise who, along with goodwill, sells its stake. However, such a person is not a partner in the firm.

Example:A physician is a physician who sold his practice and his will to B. They sign an arrangement whereby A helps B by referring him to his patients. A will receive a part of earnings, in turn. A and B aren’t partners in this regard. This is comparable to Pratt vs. Strick[4]

Section 6[5]makes explicit that ‘the genuine relationship between the parties, as all relevant facts demonstrate combined, must be taken into consideration when evaluating whether a group of people is or is not a company, or whether a person is a partner in a company.

A partnership cannot be established based on proclaimed intentions. It was concluded that simple usage of the word ‘partner’ in Raghunathan vs. Hormusjee[6]  leads to a partnership when there is no partnership. The actual or true relationship between the so-called partners of the company as a result of all the essential circumstances determines the existence of a partnership.It depends on the parties’ purpose, as demonstrated by their agreement or behavior, that creates implicit agreement or both. No one becomes a partner in a mere shared interest. Sharing finance doesn’t indicate that two individuals are partners in the same way.

Cox vs. Hickman[7] concluded that the sharing of profits is a vital and not conclusive criterion of all the fundamental elements of a partnership. Mutual agency is the real test for establishing partnerships. If one partner can bind the other partners and the company by its acts and is, in turn, linked with other partners’ activities, a partnership may only be stated.

¾    No partner is only sharing the profit. It’s only the first test

¾    Work with his real or ostensible authority should have been done personally or on behalf of him.

¾   No partner relationship exists in this scenario. (the ‘real relationship’ term in Section 6 of the Act)

The act provided the creditors with extraordinary authority. The majority of them had the option of continuing trade or not, and of creating norms and regulations for the exercise of trade which are the powers of partners.

However, if they could, the creditors did not do the business, they let the trustees go on with it. They did not become commercial partners by this act of theirs. If they had done business, none of the trustees would have taken the bill of exchange as the directors.

This is just a contract between creditors and Smiths for the repayment of current and future earnings by the creditors. This link between the creditors and debtors is not sufficient for the principle to have a connection with the agency. The Trustees are responsible since they are contract agents, yet the trustees’ creditors are not the directors.

The House of Lords Held did not agree and Cox did not take responsibility.

Lord Cranworth argued that profit participation is not a crucial partner test. The real test is whether the partners are ‘mutual agencies.’

Lord Cranworth – “A partner’s responsibility for his co-partners conduct is indeed a principal’s responsibility for his agent’s activities. If two or more individuals are involved in an ordinary business, they each have an implicit authority from another person to bind them all through contracts entered into in the course of business. Each trading partner is his co-agent; partner’s everyone is consequently accountable for the other’s regular commercial contract.”

This blog is authored by Aeshita Marwah, a student of the University of Petroleum and Energy Studies.