Capital punishment, also called death penalty, is execution of an offender sentenced to death after conviction by a court of law for criminal offence. The term “Capital Punishment” stands for most severe form of punishment. It is the punishment which is to be awarded for the most heinous, grievous and detestable crimes against humanity. 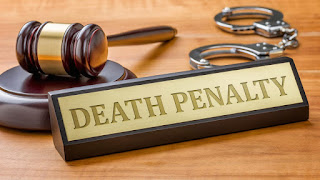 The sentence of death is the most extreme punishment provided under the Indian Penal Code in 11 cases:[i]
i. Waging or attempting to wage war or abetting waging of war against the Government of India (section 121)
ii. Abetting mutiny actually committed( section 132)
iii. Giving of fabricating false evidence upon which an innocent person suffers death (section 194)
iv. Threatening or inducing any person to give false evidence resulting in the conviction and death of an innocent person (section 195)
v. Murder (section 302)
vi. Abetment of suicide of a minor, or insane, or intoxicated person (section 305)
vii. Attempt to murder by a person under sentence of imprisonment for life, if hurt is caused (section 307)
viii. Kidnapping for ransom(section 364A)[ii]
ix. Rape and injury which causes death or leaves the women in a persistent vegetative state(section 376A)
x. Certain repeat offenders in the context of rape (section 376E)
xi. Dacoity accompanied with murder (section 369)

Death Penalty Under Laws Other Than Penal Code-

The first time issue was raised regarding capital punishment was in 1931, when Gaya Prasad Singh, one of the members from Bihar sought to introduce a bill to abolish the death penalty for offences under Indian Penal Code. However the motion was negatived .
At the time of Independence, India retained several laws put in place by the British colonial government, including capital punishment for various crimes under the IPC.
In 1955, Parliament repealed Section 367(5) of Code of Criminal Procedure, which until then mandated the courts to record reasons where it decided not to impose a sentence of death for the offences where the death penalty was an option. CrPC was re-enacted in 1973 and several changes were made not able to Section 354(3) mandating judges to provide special reasons for why they imposed the death sentence.

In 1967, the Law Commission in its 35th report recommended the retention of death penalty in India. About half a century later, in 2015 The Law Commission of India chaired by Justice A.P Shah, in its 262nd report highlighted that the penalty does not serve the penelogical goal of deterrence anymore than life imprisonment and recommended the abolishment of death penalty for all offences except terrorism-related offences and waging wars against the State, noting “Retribution has an important role to play in punishment. However, it cannot be reduced to vengeance”.

If the Supreme Court turns down the appeal against capital punishment, a condemned prisoner can submit a mercy petition to the President of India. In India, under Article 72 of the Indian Constitution, only the president may grant clemency to a prisoner who has been sentenced to death. The president’s decision is subject to judicial review by the Supreme Court. The law also allows the president to indefinitely delay in considering a mercy petition and so, in effect, indefinitely stay an execution.

In Jagmohan Singh vs State of Uttar Pradesh,[iii] then in Rajendra Prasad vs State of Uttar Pradesh,[iv] and finally in Bacchan Singh vs State of Punjab,[v] the Supreme Court affirmed the constitutional validity of the death penalty.In Bachan Singh case the Supreme Court upheld the constitutionality of the death penalty but and confined its application to the rarest of rare cases to reduce the arbitrariness of the penalty.

ACT AS A DETTERENT TO FUTURE OFFENDERS

In Machhi Singh And Others vs State Of Punjab,[vi] the Supreme Court in a three-judge Bench held: “The reasons why the community as a whole does not endorse the humanistic approach reflected in ‘death sentence-in-no-case’ doctrine are not far to seek. In the first place, the very humanistic edifice is constructed on the foundation of ‘reverence for life’ principle. When a member of the community violates this very principle by killing another member, the society may not feel itself bound by the shackles of this doctrine…The very existence of the rule of law and the fear of being brought to book operates as a deterrent for those who have no scruples in killing others if it suits their ends. Every member of the community owes a debt to the community for this protection.”
The death penalty is often criticized mainly on three counts- arbitrariness, irreversibility and human rights. The crusaders against death penalty have often argued that it is draconian and abhorrent. The punishment is not arbitrary because it comes out of judicial process. The courts are cognizant of its irreversibility and have therefore restricted it to rarest of rare cases. The punishment itself is a reflection of societal norms and determines that there are certain acts which the society so essentially abhors that they justify the taking of the most crucial of rights- the right to life.

The society is in furore today as crime is constantly on the rise. Crimes which we are witnessing now cannot be addressed by simple punishments. In a rapidly antipathic society, our legal structures need to send a strong message to enforce the idea that punishment will be “consequential” and commensurate to the crime. Recently,in the wake of an increase in incidents of rape of minors, India introduced death penalty for those who rape minors strenghtening the Protection Of Children from Sexual Offences Act.

“We do not aim to correct the man we hang; we correct and warn others by him.” Montaigne

It’s alleged usefulness extends from being a potential deterrent to serving as a primordial need for retribution. Cases of violent terror are constant reminders of the need to protect national stability by ensuring appropriate responses to such action and the death penalty forms part of the national response.

This blog is authored by Sneha Bachhawat