On the historical day of 26th November 1949, the Constituent Assembly, adopted the Constitution of India which, in its totality, became effective on 26 January, 1950. The makers of the constitution were cognizant of the fact that with changing needs of the people, need to modify the provisions of the constitution will arise. Keeping this in mind, procedure to amend the constitution was included within the constitution itself. Power of amending the provisions was given to the law making body i.e. the parliament. As time passed by, the law makers and the judiciary, both started considering themselves as the supreme authority and forgot that there exists a system of checks & balances, which is quintessential for the stability of the political system. 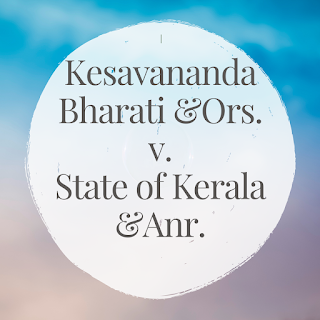 Since then, a never ending tussle started between the law making body (legislature) and the guardians of the constitution (judiciary), to ascertain their supremacy. One such clash between the paramount democratic institutions reached its peak in the mid-1970s. In this struggle for constitutional supremacy, the Supreme Court of India delivered one of the most historic judgement on 24th April, 1973 in the case of Kesavananda Bharati Vs. State of Kerala. This case is unique in the history of international constitutional law for several reasons : the political circumstances in which this judgement was delivered, the shift in balance of power that it caused, the number of opinions that the apex court gave and the length of the trial as well as the judgement itself.
In this case, the Hon’ble Supreme Court of India sat in judgement for the longest amount of time since its establishment, almost 5 months, and discussed in length the interaction & seperation of power between the three organs of the State. The judgement of this case has been declared as the lengthiest appellate judgement of the last century. The doctrine of basic structure formulated by the court in this case represented the highest order of judicial creativity.

Facts Of The Case :

His holiness Swami Kesavananda Bharati Sripadagalvaru was the head of a Hindu math in Edneer, near Kasaragod district of Kerala since 1961. The math was in possession of certain land acquired in his name. The Government of Kerala introduced Kerala Land Reforms Amendment Act, 1969, which adversely affected property rights of religious institutions and entitled the government to take away some of the land in possession of the Edneer math, for socio-economic purposes. Swami Kesavananda challenged this state land reform legislation in 1970. While the case was still pending before the court, Parliament passed the Constitution (Twenty-ninth Amendment) Act, 1972 and inserted certain land reform acts in the Ninth schedule making them immuned from judicial scrutiny. This adversely affected Swami Kesavananda and under the persuasion of his counsel & renowned Indian jurist Nanabhoy Palkhivala, he filed a petition in the apex court, under article 26 of the Constitution, concerning the privilege to oversee religiously claimed property without government obstruction. His petition challenged the constitutionality of the 24th, 25th, 26th & 29th Amendment of the Constitution and hence the Supreme Court had to reconsider its decisions in Shankari Prasad, Sajjan Singh & Golak Nath Case.

Relevant Questions & Contentions Before The Court :

Observations Of The Court :

Swami Kesavananda Bharati did not get any personal relief from the court but this case became one of the most significant case in the history of international constitutional law. The court by slender majority of 7:6 declared that the Parliament has the power to amend any and every part of the Constitution but only to the extent that such amendment does not violates the basic structure of the Constitution.
The case was heard by the largest ever Constitution Bench of 13 Judges. The bench gave eleven separate judgments, which agreed on some points and differed on others, implying that there is no clear indication of what the Supreme Court actually held. For the first time in the court’s history, the judges gave a summary of their decision, which four judges (A.N. Ray, K.K. Mathew, M.H. Beg, S.N. Dwivedi) refused to sign because they said it was inaccurate.
The court adopted a teleological approach and held that the word ‘amendment’ does not includes such alteration that completely deforms the Constitution and it loses its identity. All constitutional amendments enacted after the date on which the Kesavananda judgement was delivered would have to pass the ‘basic-structure filter’ created by the Supreme Court. The views of the majority on each issue were as follows:
1. The Twenty-fourth Amendment to the Constitution was valid.
2. The Twenty-fifth Amendment to the Constitution was valid, except for the clause ousting the courts’ jurisdiction.
3. The Twenty-ninth Amendment to the Constitution was valid.
4. The Golak Nath judgement, which had asserted that fundamental rights could not be taken away or nullified by the Parliament, was overruled.
5. There were no implied limitations on the Parliament’s power to amend the Constitution under Article 368.

The Supreme Court’s judgement in the Kesavananda Bharati case was a very bold & strong move. After 68 days of rigorous hearing, before a 13-judge bench, where hundreds of cases were cited and Constitutions of more than 71 countries were referred, the Hon’ble Supreme Court propounded the ‘doctrine of basic structure’ & finally declared that though the amending power of the Parliament under article 368 was unrestricted, it does not have the power to amend the basic structure of the Constitution, which leads to defacing its identity. Generally, basic structure comprises the features such as independence of judiciary, seperation of power, federalism, secularism etc. but finally the power to declare what qualifies as the ‘basic structure’ rests with the Supreme Court.

As the future events unfolded, India, the world’s largest democracy faced the most oppressive single party dominance era during the Indira Gandhi regime. During this period, attempts were made to overrule the Kesavananda case judgement and even a 13-judge bench was comprised by the then CJI A.N. Ray but the bench got dissolved within 2 days of hearing and the attempt failed badly. Most of the people believe that it was the judgement of the Kesavananda Bharati case & the basic structure doctrine that saved the Indian democracy during these tough times and hence this case will always occupy a hallowed place in our constitutional history.
Today, even if we accept the arguments of those who oppose the basic structure doctrine, it is nearly impossible to simply discard it, as system of binding precedents is applicable in India and a 13-judge or 15-judge bench is required to reconsider the judgement of Kesavananda Bharati case. Moreover, the Kesavananda judgement cannot be discarded by exercise of legislative power, due to the very nature of the judgement and the only other way to discard it, is by using extra-constitutional means & going against the Constitution. In the near future, occurance of any such event seems impossible. As a safety valve to preserve Indian democracy, the basic structure doctrine should live on.