The law governing child custody is similar to guardianship. Guardianship is the rights and powers that an adult has over the property of minor but, child custody is a narrower concept compared to guardianship. The concept of child custody is related to the upbringing of the child, day to day care and control of the minor child. When a marriage ends up the person who gets most affected is the child of the divorced couple. So, at the time of divorce or judicial Separation the main issue arises is about the custody of the child. The court resolves the issue by considering the welfare of the child. The custodial parent look after the child’s education, medical, physical and other financial commitments but the non-custodial parent only holds the right to meet. 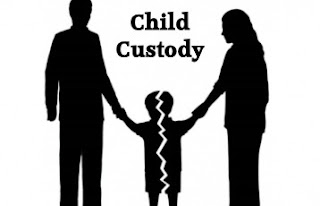 After the dissolution of the marriage both mother and father have equal rights on their child. The court ensures that the child should get the affection of both mother and father. The physical custody of child will be granted to either father or mother but the other parent gets the visitation rights. In case, both the parent are not in the capacity to hold the child, the custody of child may be awarded to their paternal or maternal grandparents. The court may also appoint a third party to look after the child. The court will grant the custody of the child considering the best interest and welfare of the child irrespective of the claims of the parties.

After the dissolution of marriage the court order the custody of child in the following forms:

CUSTODY UNDER GUARDIANS AND WARDS ACT 1890:

This is a general law which provides remedy for the issue of child custody to the parents. The remedies provided under this act are as follows:

The Hindu Minority and Guardianship Act, 1956 is similar to Guardians and Wards Act, 1890. This act is applicable only to Hindus, Jain, Buddhist, and Sikhs.

The Hindu Marriage Act ,1955 deals with the maintenance, education and caring of the child. The Section 26 of the said act highlights that, the court may pass interim order, judgments, and amendment regarding the maintenance of the minor child and dispose the decree within 60 days from the date of service of notice of the court.

The matter relating to the child custody in Muslim law will be dealt under the provision of Muslim Personal Law (shariat) Application Act, 1937. Certain principles will be followed under Muslim law while deciding the custody of the minor child as they are:

Thus, the above mentioned rules should be followed while awarding the custody of the child under Muslim law.

The issues regarding the child custody is solved by the provision of Indian Divorce Act, 1869 which is applicable universally. The Christian religion needs to follow the rules prescribed under section 41 of the said act. As section 41 of the act states that, the court may pass an interim decree for the maintenance, education and welfare of the minor child. In addition to it section 42 and 43 of the same act holds the right to decide upon the child custody after the decree of separation or divorce is passed.

The courts have started to consider the custody disputes as a right of the child rather than the right of the parent. Even though the court considers the personal laws of the parties and preferences are given to the parents. But, the child’s welfare of paramount of importance is the foremost thing which will be considered by the court.