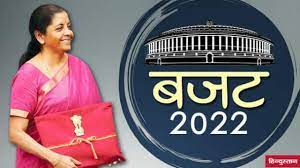 India, that is Bharat calls the formulation of its receipts and expenditure containing the accounts of past, current and upcoming Financial Year calls it “BUDGET”, although Article 112 of the Indian Constitution has named it “ANNUAL FINANCIAL STATEMENT”.[i]The Budget, as the name suggests is created and formulated by the Budget Division of the Department of Economic Affairs, working under the supervision of the Finance Ministry. Earlier, Railway Budget was used to be presented individually and apart from General Budget but in 2017, both of them had been merged. Even Budget is generally presented on 1st of February, immediately after the Economic Survey, that is the annual report card of the nation’s economy.

This year’s budget primarily focuses on Macroeconomic Growth along with a focus on Microeconomic aspects through inclusive welfare. The country’s growth is projected to be around 9.2% with the PLI Schemes said to create an additional production of Rs. 30 Lakh Crore, which is a promising figure but remains to be seen happening in the future. A major statement the Finance Minister made is that India is entering into “AMRIT KAAL”, which is entering into its 100 years of establishment as an independent nation and this Amrit Kaal has been divided into 4 aspects–

Through this aspect, the government tries to integrate Roads, Railways, Ports, Airports, Waterways, and Logistics Infrastructure by bringing a multi-modal framework where these 7 areas through GatiShakti National Master Planwill be aligned with the National Infrastructure Pipeline. For this, National Highways will be expanded by 25000 km by 2022-23, Rs. 20000 Crore will be allocated for National Highways expansion; Contracts are to be constituted on PPP mode in 2022-23 for the establishment of Multi-Modal Logistic Parks for smoother docking and other port services; ‘One Station One Product’ to be implemented for local businesses, 400 new Vande Bharat Trains to be manufactured with top-classfacilities with features driving better customer experiences, also 100 PM Gati Shakti Cargo Terminals for multimodal logistics. Even on the sidelines of the ‘Bharatmala Project’ constituted for the transformation of port infrastructure, the budget proposes the ‘Partvatmala Project’ for the establishment of 8 ropeways having 60 km of length in total.

For AGRICULTURE, the government proposes to have chemical-free natural farming, and this farming should be especially adopted along the river channels within a span of 5 km; Rs. 2.67 Lakh Crore would be paid to 1.63 crore farmers directly to them for procurement of wheat and paddy; one of the major promising proposals with which the government came up is the idea of ‘Kisan Drones’ for crop assessment and digitization of land records which can be fruitful for the upcoming growth of the Agricultural sector and some sort of formal and economic touch would be given to the sector; even an additional outlay of Rs. 1400 Crore has been allocated for Ken Betwa Project and the government has also come up with the proposal of linking other major rivers for better outreach of water resources to the needy people which can be boonful to the people affected by drought, less rainfall, and other factors. [ii]

For one of the most heavily affected sectors of the economy, that is MSME’s, the government came up with the proposal to provide additional credit under the Emergency Credit Line Guarantee Scheme (ECLGS) to 130 lakh MSME’s by extending this cover till March 2023 and expanding its outlay by Rs 50000 Crore, making a cumulative sum of Rs. 5 Lakh Crore. In the area of Skill Development, the government will create a portal- Desh-Stack e portal to skill, re-skill the working structure of the citizenry. Apart from Agriculture, startups would be enhanced to promote Drone Shakti for Drone as a Service.

One of the most important sectors which were ravaged by Covid-19, Education also saw some new additions on the pretext of the digital arena whereby ‘One class one TV channel’ program, the government through PM e-vidya scheme would expand the impartation of digital education from 12 to 200 channels for better accessibility.

In the Health sector, ‘National Tele Mental Health Centres’ would be established owing to the mental trauma undergone by the people during the phase of Covid 19, which will be 23 in number and will work under the supervision of NIMHANS and IIIT Bangalore.

One new aspect that is added to the Budget is the PM Development Initiative in the North-east Region (PM-DevINE) to fund infrastructure and development projects in the North-East with an initial allocation of Rs. 1500 Crore.

Another major addition in the course of inclusive welfare is the Vibrant Villages Programmeto develop the border villages having sparse population and minimal development, which is a welcoming proposal for better inclusivity and accessibility.

Following the path of better accessibility and inclusivity, the Budget also signified to include 1.5 Lakh Post Offices in the Core Banking System to provide better banking services through the Post Offices. The government also proposed to make chip-embedded passports thus working towards the cause of digitization.[iii]

A first-of-its-kind task force, that is Animation, Visual Effects, Gaming, and Comic (AVGC) promotion task force would be set up in order to facilitate this sector. A Production Linked Incentive (PLI) Scheme will be enforced to build the 5G ecosystem in the subcontinent.

For the concept of Atmnirbhar Bharat to expand, the Budget also proposed to increase the capital procurement budget from 58% to 68% in 2022-23. The government has also pegged to contribute towards Research and Development in Sunrise Opportunities like AI, Semiconductors, Green Energy, Clean Mobility Systems, etc., thus working towards the future prospects of the global scenario.

On the lines of Vehicle Scrappage Policy which was formulated to work towards pollution mitigation, the government also proposed the Battery Swapping Policy in order to give a boost to the EV infrastructure. Also, an additional allocation of Rs. 19500 Crore would be made as a PLI for the manufacturing of high-efficiency solar modules, which is also a welcoming approach towards fulfilling the goal of Panchamritmade in Cop 26. Apart from this, the government also proposed to set up 4 pilot projects for coal gasification and converting coal into chemicals for the industry, to make India green and environment-friendly nation.[iv]

The most important aspect regarding the current years’ Budget is an increase in Capital Expenditure sharply by 35.4% to Rs. 7.5 Lakh Crore, which is a long goal step taken for macroeconomic development. [v]

Also with the approval given for the establishment of world-class colleges and universities in Gift City, the government came up to establish the first International Arbitration Centre to institutionalize the arbitral proceedings to facilitate the sector of Alternate Dispute Resolution which will ultimately lessen the burden of courts and faster disposal of matters would take place with cost-effective mechanisms. Even Sovereign Bonds would be issued to mobilize resources for green infrastructure.

For the betterment of States, the allocation for states for their capital investment has been increased from Rs. 10000 Crore to Rs. 15000 Croreand a fiscal deficit of 4% of GSDP has been formulated for states. The government also worked to control its fiscal deficit at 6.9% of GDP as against the budget estimates of 6.8% of GDP[vi].

The government with its aspiration to bring digital currency in the form of cryptocurrency also pegged a tax of 30% on any transfer of digital assets. [vii]

Though Budget 2022 provides some provisions leading to sustainable development on a macroeconomic level and making an inclusive ecosystem, there are some concerns attached to it. Firstly, in the aftermath of the Covid-19 Pandemic, many workers have been unemployed and are left with no source of income and during this, the allocation for MGNREGA has been reduced by 25.2%bringing it to Rs. 73000 Crore, making it a problematic figure.[viii]When Education also became a sector that was heavily ravaged by Covid-19, the allocation for National Education Missionsaw an increase of approx. Rs. 9000 Crore which is a meager increase in front of the complexities around the Education Sector.

Apart from this, the National Health Mission working towards the improvisation of primary, secondary, and tertiary healthcare, has also witnessed a meager increase of approx. Rs. 3000 Crore when it needs the maximum allocation after facing the brunt of Covid-19. Also, when the government itself needs an extra pool of money for public expenditure and when large corporations especially the IT sector companies consolidated a plethora of money in the advent of a virtual ecosystem, then their social liability in the form of taxation has been reduced from 18.5% to 15%, thus giving a free hand to the corporate mighties by a tax reduction of 2.5%.

The government while pegging a holistic Budget for the nation has covered all the aspects with the motto of macroeconomic development and inclusive welfare, but it also needs to look upon the concerns attached to it regarding the allocation of funds to different sectors and other aspects and need to work upon keeping the public primarily into consideration. Even if the evolutionary steps are taken in the form of inclusion of different allocations on new aspects, the root causes on the first-hand needs to have been sorted out like the allocation for National Health Mission, National Education Mission, job guarantee schemes like MGNREGA, etc. Also, sustained and phase ordered mechanisms should be undertaken by the government while making an expenditure in different sectors while keeping into view the fiscal deficit of the nation. Even, the government needs to go for measures to curb inflation through the taxation mechanisms undertaken by RBI in form of Repo Rate, SLR, Reverse Repo Rate, etc.

This blog is authored by Yash Singh, a student of Chanakya National Law University, Patna