We all want to be in an environment where at least the basic facilities to ensure healthy-living conditions are in constant supply. The efforts to ensure proper disposal of human waste seem to have taken deviance in the Indian scenario as still, some of the population resort to bush toilets at the call of Mother Nature. Basic sanitation refers to all the measures put in place to ensure the salubrious separation of human and other waste from human reach. 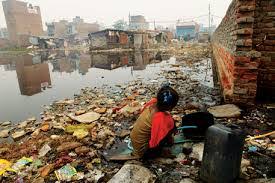 “It is health that is a man’s wealth and not pieces of gold and silver.” – MAHATMA GANDHI
The term basic refers to the necessary and essential healthy living conditions and in every household should be the proper sanitation facilities including toilets. Basic sanitation also encompasses the collection of refuse and its proper disposal, safe drinking water, and the maintenance of sewer systems.

CAUSES OF POOR SANITATION IN INDIA

With most of the people ranging below the poverty line in India, the whole idea of having at least one toilet for the family remains an uphill battle. Most of these people are laborers and wage earners who at the end of the day, use bush toilets as they do not have any habitat to call their own. What remains for them is to defecate in the open land as this appears to be cheap and convenient. Most of these laborers involved in the construction industry are said to lead nomadic lives as they move from a particular area once their task gets done and because of this, most of the land is turned into public toilets.

The level of poor sanitation owes to the illiteracy levels of the masses. For example, when a certain building is being constructed even when the toilet is available, people have become so attached to open defecation that they would rather not make use of the toilets inside the construction houses and buildings. Lack of knowledge also has contributed to poor sanitation in India. Some people are yet to be educated on how a clean environment contributes to the well-being of an individual. For some, the knowledge is there but since there are no stringent laws and punishments for that, they still disregard the use of flush toilets and continue living in ignorance. Furthermore, some of the people cannot afford to purchase the equipment needed for the construction of a single toilet. One can think of a village where all the families are utilizing the bush toilets, what the entire village area would be like at the end of the day.

There exists a lacuna in the enforcement of laws governing sanitation in India and this is why even garbage is found almost everywhere. Sometimes, the garbage collectors do not show up to collect domestic refuse and as a result, people dispose of the waste anyhow, and anywhere. In some other parts of the globe, if one is caught polluting the environment, then they are liable to pay some amount of fine but in India, the masses are being left to deal with their refuse as they wish. The sewer systems are not always maintained and some of the contaminated water goes into various water bodies being utilized for cooking and drinking purposes leaving the villagers vulnerable since the water will not be good for human consumption and utilization.

THE EFFECTS OF POOR SANITATION IN INDIA.

Poor sanitation in India has affected the development and often hindered the progress of the nation as many people have succumbed to diarrhea and around one lakh Indian children die because of diarrhea yearly. Poor sanitation means some funds will have to be spent on the health insurance of the child and so, basic sanitation can prevent unnecessary spending for causes of preventable diseases. To those still using bush toilets, the inconveniences associated with it should not be undermined. If one visits the bush during the night, they expose themselves to danger for example snake bites. If not attended to urgently, one might lose his or her life. Where the flow for the sewer water gets disrupted, the water will remain stagnant and hence, a breeding place for mosquitoes and other germs.

The situation is worsened during the rainy seasons when the waste is carried along with the rains but unfortunately, because of poor water drainage systems in India, which means people will be forced to pass through such polluted water, which still is unhealthy. Poor sanitation also has some adverse effects on the environment as the land becomes pollutedafter the waste is improperly disposed of. Some of the waste instead of being burnt gets disposed on the land which even lowers the soil nutrient hence, the lower yield of production.

WHAT SHOULD BE DONE

To help improve the basic sanitation in India, change needs to start from an individual level other than relying on the State to bring forth the change. Once an individual realizes the need for guarding their environment jealously, then the whole scenario will change for the better. More and more awareness programs should be conducted on the benefits of keeping the environment tidy, proper disposal of waste, and the importance of having at least one proper toilet for a single household. A new set of sanitation laws should be put in place to ensure that no person pollutes the environment in any way however, due to the cunning nature of humanity, some laws become much more effective once there are certain penalty provisions. Any person who is to be found wanting should be held accountable before the law. The sewer systems should be maintained from time to time as this will help combat diseases. In case of any sewer pipe bursts, immediate action should be taken by either the household or the State. There has to be a common dumping site, particularly for waste disposal to avoid littering everywhere. Environmental campaigns including the GO GREEN, GO CLEAN campaign can be of great use in this regard.

Poor basic sanitation in India is a result of illiteracy, poverty, ignorance, and lack of knowledge and all these contributory factors are not far from being corrected. Every citizen has a right to a healthy environment but this does not overshadow the duty of every individual to ensure that the environment is kept clean at all times. The State through the municipal corporation helps to ensure that refuse is being disposed of aptly. Basic sanitation requires that the State and its citizens work for hand in glove to cooperate fully towards a healthy India with at least the basic sanitation facilities for everyone.
Image Source
Author: Florence Ruzive

1 thought on “Basic Sanitation In India: A Cause For Concern”