The right to liberty, a fundamental right provides us the right to ask for bail. Anticipatory bail means seeking a temporary bail in anticipation of an arrest on the accusation of a non-bailable offense having committed by him and is mentioned under section 438 of the Code of Criminal Procedure (CrPC). It was recommended by the Law Commission of India in its 41st report. 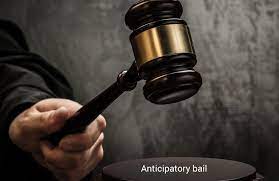 The report said “The necessity for granting anticipatory bail arises mainly because sometimes influential persons try to implicate their rivals in false cases for the purpose of disgracing them or for other purposes by getting them detained in jail for some days… Apart from false cases, where there are reasonable grounds for holding that a person accused of an offense is not likely to abscond, or otherwise misuse his liberty while on bail, there seems no justification to require him to first to submit to custody, remain in prison for some days and then apply for bail.” [1] In this article, I will be talking about section 438 of CrPC. I will also discuss the procedure to file an anticipatory bail, factors, refusal, and some important case laws of anticipatory bail.

The provision of anticipatory bail was brought into power as a tool to keep a check on the gross misuse of the power of arrest. Section 438(1) of CrPC reads “When any person has reason to believe that he may be arrested on an accusation of having committed a non-bailable offense, he may apply to the High Court or the Court of Session for a direction under this section; and that Court may if it thinks fit, direct that in the event of such arrest, he shall be released on bail.” [2]

Contrary to ordinary bail, anticipatory bail gives the authority to a person to seek bail and be released even before the arrest is made. In Gurbaksh Singh Sibia and the Ors v/s State of Punjab, the hon’ble Supreme Court Constitution Bench led by the then Chief Justice Y.V. Chandrachud ruled out the scope of the power of the judiciary to make legal decisions on their discretion in the matter of anticipatory bail and also emphasized on its importance. Hence it was observed that “It may perhaps be right to describe the power (of anticipatory bail) as of an extraordinary character. But this does not justify the conclusion that the power must be exercised in exceptional cases only, because it is of an extraordinary character. We will really be saying once too often that all discretion has to be exercised with care and circumspection depending on circumstances justifying its exercise.” [3]

First, the concerned police officer is approached by the public prosecutor. The public Prosecutor will talk with the police officer and if there is no F.I.R. (First Information Report) filed, the prosecutor will be convinced that there is no need for anticipatory bail. Hence, the judge will also support the following statement made by the public prosecutor and will verbally ask the particular lawyer to withdraw the anticipatory bail. The lawyer will make an oral prayer to his/her client for seven days pre-arrest notice. If the bail application is rejected in Sessions Court, a person can apply for the same in High Court. If the bail is rejected in High Court, it can be further applied to the Supreme Court. If an F.I.R. is filed against a person, the investigating officer will send a notice of arrest. As soon as one receives the notice, he/she should apply for the anticipatory bail following the same procedure as mentioned above.

The Hon’ble Supreme Court has laid down a detailed and exhaustive list of factors that are to be kept in mind while granting anticipatory bail. These factors are as follows:
· Severity and nature of the accusation and also the role of the accused must be clear and easy to comprehend.
· Possibility of the applicant absconding from the processes of law.
· The possibility that the accused can repeat the same or similar and other offenses.
· Cases where the main objective of accusing the other person is injuring or humiliating the accused.
· In high magnitude cases, granting of anticipatory bail can impact a large number of people.
· There can be the possibility of the accused tampering with the evidence or threatening the complainant.
· Frivolity in prosecution should always be considered.
· Cases require custodial interrogation.

There are certain criteria which if the concerned case fulfills, can be the ground for refusing to grant bail. These are:
· The court looks at whether there is any possibility of the applicant absconding in the event of granting the bail. If there prevails even the slightest possibility of this happening, the court can refuse to grant the bail.
· The applicant previously undergone imprisonment on conviction in any cognizable offense can be the ground of refusal.
· When a case for an affordable declares to steady incriminating material.
· If it comes into the view of the court that there are chances that the applicant might influence the investigation of the case to his advantage, the court can refuse the bail.
· If the prima facie case with which the applicant has been charged can be made out.

· Sri H D Kumarswamy vs. State of Karnataka [4] – In this particular case, the court granted interim anticipatory bail and directed the Lokayuktha Police to release the petitioner.
· Siddharam Satlingappa Mhetre vs. State of Maharashtra [5] – In this case, an application was submitted by Mr. Bhushan stating that the appellant has been falsely incriminated and also that he was not likely to abscond and he has already joined the investigation. He also stated that his client was not likely to misuse his liberty while on bail. Hence, there was no ground to decline the bail request by the appellant.
· Suresh Vasudev vs. State [6] – In the case mentioned, it was observed that section 438(1) of CrPC applies only to the non-bailable offences. It was found that the section itself especially prescribes that any order passed under this section would be effective only after the person concerned has been arrested.
· Case of re Digendra Sarkar [7] – In the following case, it was held that anticipatory bail can be granted when there is no “First Information Report” and there is no case registered of non-bailable offense against the accused.

Section 438 is a provision that is concerned with the fundamental right of personal liberty of an individual. This section is entitled to the benefit of the innocent who in anticipation of an arrest can seek bail. Yes, this section can be seen as a boon in the cases where either a person is falsely accused of the crime or where the accused person will follow all the criteria of the bail and will help the court and the authorities to do their job. In short, anticipatory bail acts as a protective shield for the innocent to protect themselves and their personal liberty as mentioned under article 21 of the Indian Constitution.