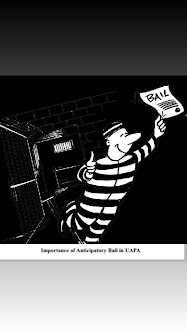 1.      “Unlawful Activities Prevention Act” widely known as UAPA is an act that gives the government, arbitrary power to detain anyone, which infringes the fundamental right of liberty of an individual. This act basically allows the State to designate someone as a ‘Terrorist’ without a trial which is dangerous and arbitrary. Bill givesthe state unprecedented power and rest assured, with great powers comes great irresponsibility. This act weakens the in Indian federal system and concentrate greater power in the hands of the centre. UAPA is lethal for the democracy as this act allows centre to declare an individual as a terrorist. This is specious and falls apart when a simple question is posed. What is the purpose of designating an individual as a terrorist? Even after establishing so many principles to safeguard the citizens of the country against unlawful determination, arbitrary acts like UAPA are still in place and section 43D (4) of the Act States that: “Nothing in section 438 of the Code shall apply in relation to any case involving the arrest of any person accused of having committed an offence punishable under this Act.” Section 438 of CrPC deals with the Anticipatory Bail. Bail is one of the most important and fundamental aspect of any Act, Statute or criminal justice system that guarantees the accused the right to a fair trial, even after UAPA being such a vague act, center has excluded the provision for the Anticipatory Bailby adding section 43D (4) in the act.

2.      The provisions of UAPA are so draconian and uncertain that includes a definition of terrorism to encompass a wide range of non-violent political activity, including political protest.Furthermore, it allows detention without a charge sheet for up to 180 days and police custody can be up to 30 days. It also creates a strong presumption against bail and anticipatory bail is out of the question. It creates a presumption of guilt for terrorism offences merely based on the evidence allegedly seized.[i]

3.      It becomes much more important in the acts like UAPA to have a provision of Anticipatory Bail because of the vagueness of the definitions’ that are given under this act, which leads to confusion while interpreting the act.

4.      The major objective of this act is to safeguard the people and politicians who hold the power in the cabinet from criticism. Through this act, government is targeting specially those whose identity makes them vulnerable. The necessity for granting Anticipatory Bail arises mainly because sometimes influential persons try to implicate their rivals and critics in false cases for the purpose of disgracing them or for other purposes by getting them detained in jail for days.

5.      The arbitrariness of throwing someone behind the bars just not to confront criticism is the infringement of right to liberty which is given to the citizens of India under Article 21. Personal liberty can never be secure unless it is possible for an independent body to control all sources of abuse, and bail is one of the most important instruments to safeguard liberty.[ii]The concept of bail is inextricably linked to the right to personal liberty of an individual. Properly interpreted, Sec 438(Anticipatory Bail)’ of the CrPC means- “IF COURT THINKS FIT”. It gives the court a discretion to grant the anticipatory bail or reject the bail on its own will after looking into the material facts of the case.When this basic right to file an anticipatory bail can be given under Section 375 of IPC which deals with heinous and inhumane crime like rape, then why not for the people who are charged under UAPA for unlawful activities which are vaguely defined under this act. This act inculcates a culture of political witch hunts where selected people that question the legitimacy of the state and the ruling classes are outlawed and sent behind the bars. The state has no right to interfere with the due process of justice, after adding section 43D (4) the State has restricted the path of providing justice. The accused should at least have the right to file an application for the Anticipatory bail in the court, and let the court adjudicate

6.      The guiding principle of “Let 100 guilty be acquitted but one innocent should not be convicted”.[1] Justice is the ultimate aim of every legal system. Justice would be denied in a horrendous way in every case where a prosecution results in an innocent man being convicted. Unfortunately, despite all safeguards being adopted by the courts, even today innocent people are convicted because of Vague acts like UAPA and not even having the right to apply for an Anticipatory Bail. While deciding a case in the contemporary world the question is no longer simple and straight forward: ‘Has the act been established and is punishable?’ and ‘what law punishes for this act’? but it also includes other set of questions as well like: ‘What is this act?’, ‘To what level or to what reality does it belong?’, ‘What would be the most appropriate measure to take?’.

7.      That is the reason constant vigilance is needed to ensure that any person accused of a crime is given the benefit of doubt, and that we don’t encroach on the presumption of innocence. What’s the value of a person’s life? Can anyone measure it? Conviction destroys his whole life So, letting thief go away is the best option than deciding the case hurriedly and destroying the life of an innocent individual.

8.         Imran Kirmani, an aeronautical engineer from Kashmir working as a technician inDelhi was picked up in 2006 by members of the special cell of Delhi, alleging association with Lashkar-e-Taiba a banned organisation. He along with Ghulam Rasool was in jail for five years only to be acquitted for a crime not committed. SafooraZargar was caged inside a prison, at the mercy of the unjust system against which she was dissenting, she was booked for UAPA just because she was raising her voice and criticizing the government policy and many more like her. The least law could have done for them was at least give them the right to exercise their powers given to them under Section 438 CrPC to file for an Anticipatory bail, which have been denied under section 43D(4) of UAPA.

9.   In the past, court has struck down provisions of penal statutes on accounts of vagueness and uncertainty when they had led to the misuse of penal provisions, and encroachment of fundamental rights[2]. Even though, UAPA is a specimen of similar forms of misuse and  suffers from vague and broad legal drafting, such intervention of the court is unlikely in case of UAPA because of the nature of this law. UAPA, being a counterterrorism law presupposes the need for certain legislative and imprecise definitions since the protection of national public requires a scale of discretion in the land of public authorities.The provision of bail, especially anticipatory bail works on the principle of innocent until proven guilty. It is a fundamental principle of the Criminal Jurisprudence, enshrined under Article 11(1) of the Universal Declaration of Human Rights[3]. It also reflects that the grant of anticipatory bail is a fundamental right as the law cannot deprive them of life and liberty until they are proven guilty beyond a reasonable doubt. Anticipatory Bail should be mandatory provision in all legal cases.

10. “When people can get away with crimes just because they are wealthy or have the right connections, the scales are tipped against fairness and equality. The weight of corruption then becomes so heavy that it creates a dent that forces the world to become slanted, so much so — that justice just slips off.”― Suzy Kassem. We can easily deduce this quote with the need to grant the provision of anticipatory bail to an accused of a crime as they are also a victim of crime done by wealthy people who have the right connections which empowers them to file false cases against anyone they wish to. This type of malpractice in law creates disruption in the stroll of justice.

[ii]Article 21 of the Constitution of India – Right to Life and Personal Liberty By Riya Jain,