Animals are one of the most precious gifts of nature. They play an important role in balancing life on earth. They provide food, clothing, companionship, and act as a means of employment and livelihood for the poor. Since centuries, humans have been dependent on the animals to make their own lives easier. Humans have always tried to make the best use of them. But while doing so, they often forget that these animals also have lives and heartbeats in them too. They have been exploiting the animals to such an extent that they don’t even realise that animals are nothing but the innocent creatures of nature, who feel an equal amount of pain and sorrow as of humans. 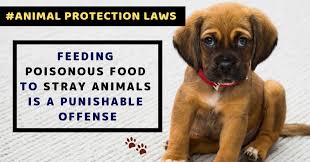 “The greatness of a nation and its moral progress can be judged by the way its animals are treated.”
-Mahatma Gandhi

India, being one of the mega biodiversity countries in the world, has framed many laws for the protection of the animals. In-spite of such laws, animals still suffer daily abuse and prejudiced treatment by the people.
This blog discusses the inhumane treatment given to the animals in India and the laws embodied to protect them.

For years, India has been a place where animals or non-human species have been sacrificed for many purposes, like in the name of culture and traditions or medical research, industrial use, farm products or for human consumptions. The animals are mistreated, harmed and even killed to save the lives of humans. They are not considered to have a noble existence. They have been subjected to inhumane treatments by the people of India. Some of these unjust and unfair treatments include sacrificing the animals for the sake of religion, hunting, and poaching purposes and to satisfy their own needs.

On 27th May 2020, atrocious news of the death of a pregnant elephant at Thiruvizhamkunnu forest area in Kottapadam gram panchayat of Kerala came into the spotlight, which shocked the entire nation.[i] An elephant was fed a pineapple with crackers stuffed in it by some local people, which burst in its mouth and as per the medical reports, the animal suffered for two entire weeks before giving up on life. While in another case that took place in the month of October, an FIR was filed in Aurangabad City Police against two teenagers who killed a dog by gouging out his eyes and continued beating him.[ii]Such heinous acts should not go unpunished or else people will keep abusing animals for their own benefits.

LAWS FOR THE PROTECTION OF ANIMALS

To save and protect the lives of the animals from the atrocious acts of humans, India has laid down a number of provisions in its Constitution, and under other statutes as well.

The Constitution of India, after its 42nd amendment in 1976, has enshrined several articles ensuring the rights of the animals. It has tried to make it a duty of the citizen of India to look after the animals. Some of the articles prescribed under it are-
· Article 51-A (g) provides, “it shall be the duty of every citizen of India to protect and improve the natural environment including forests, lakes, rivers and wildlife, and to have compassion for living creatures.”
· Article 48 provides, “The State shall endeavour to protect and improve the environment and to safeguard the forests and wildlife of the country.”
· The State and the Centre both have the powers to pass laws regarding the prevention of cruelty to animals and protection of wild animals and birds, prescribed under Items 17 and 17B of the Concurrent List, respectively.

This Act was the first taken for the welfare of the animals. It was enacted to prevent the infliction of unnecessary pain or suffering on animals and for that purpose to amend the law relating to the prevention of cruelty to animals. Under section 4 of the Act, the Animal Welfare Board of India [3] was established to prevent cruelty, suffering and pain to all creatures.[iii]

Chapter III of the Act deals with the cruelty to animals. Section 11 of the Act prescribes the punishment for the cruel treatment of animals like beating them, unreasonably administering any injurious drugs to any animal, confining them, willingly starving them, etc. such offences are punishable with fine or with imprisonment which may extend up to 3 months.

This Act was enacted for the protection of wild animals, birds and plants from the vicious killing, unjust and unfair treatment by people and from undesirable sufferings. This act prescribes punishment and penalties for the offences committed under the act. Its objective is to ensure ecological and environmental security of the country. Section 9 of the Act has prohibited the hunting of the animals specified under Schedules I, II, III and IV of the Act.

Sections 428 and 429 of the Indian Penal Code punishes for the mischiefs committed by people by killing, poisoning, maiming or rendering useless any animal, with an imprisonment which may extend up to two years, in case of animals whose value is ten rupees or more and five years, where the value is fifty rupees or more.

There are many other acts and rules laid down for safeguarding the animals and wildlife of our country. Some of them are-
· Animal Birth Control (Dogs) Rules, 2001.
· Transport of Animal, Rules, 1978.
· Performing Animal Rules, 1973.

Indian Judiciary has also played a major role in ensuring the safety of animals in the country.

In this case, the Supreme Court held that animals too have the right to free movement and it cannot be curtailed to fulfil the fundamental rights of human beings.

3. Animal Welfare Board of India v. A. Nagaraja & Ors[vi]

This was one of the landmark judgements declared by the Supreme Court on the cruelty to animals. The Supreme Court held that animals too have the right to live a dignified life.

STEPS TO BE TAKEN

There are certain steps which need to be taken by the Government as well as the citizens of the country to ensure the welfare of the animals. Some of them are-
· The Government needs to make proper rules and regulations relating to the safety of animals and spread awareness among the general public.
· The Government also needs to amend the existing laws and increase the intensity of the punishments for the offences committed against the animals so that it would generate fear among the regular offenders.
· The NGOs should conduct awareness programs and campaigns to make the people aware of the existing issues related to animals and the steps which they can take to prevent those.
· The citizens must consider the animals to be equally important as of humans and think it as their duty to ensure the well-being of all the creatures.

Animals play a significant role in the lives of human beings. They maintain the balance of the ecosystem. So it’s the duty and the responsibility of human beings to secure the well- being of such creatures. Framing the laws does not guarantee the protection and preservation of animals. A number of laws have been passed in India regarding the welfare of the animals, but they are not properly implemented. The offenders even sometimes go unpunished. The existing laws need to be enforced and properly implemented to make sure that no animal is harmed in the future. Unless and until the citizens take the abuse of animals as a serious issue, the animals cannot live a peaceful life and they will continuously be subjected to heinous and wicked acts of the humans. Change cannot be brought in by the government only. It has to involve the efforts of both the government as well as the citizens of the country to give the animals a better and peaceful life which they deserve to live.