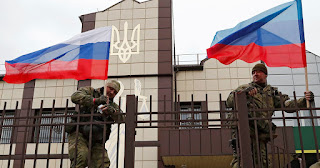 It’s been more than ten days of Announcement by Russian president Vladmir Putin of so called “military operation” in eastern Ukraine. Heavy civilian and military causality is reported from the both the sides, cities were turned into ruin, economies of both the countries are severely impacted and Europe is on the verge of biggest and the fastest growing  refugee crisis after the end of World War 2. Incidence like these make us wonder the relevance of international law in its role of acting as a deterrent to war and bloodshed in international law.
This article is an attempt to analyze the Russian actions through the perspective of international law and also to comment on its effectiveness on this dispute.

The united nation charter article 2 (4) restricts the states from using force as a means to resolve the international disputes. Any country which uses force or any other similar means to advance its interest while encroaching into the territorial integrity of the other state violates this fundamental rule of international law. Russian actions including military bombing and pummeling the cities into the Ukraine prima facie can be classified as an act of aggression.

Russian actions within the territory of Ukraine are also running against the international humanitarian law. The most fundamental rule of international humanitarian law explicitly states that civilian and their objects would not be made target of military actions. Russia’s Military Manual from 1990 prohibits “attacks against the civilian population or against individual civilians” and its Regulations on the Application of International Humanitarian Law from 2001 states: “The civilian population as such and individual civilians enjoy protection which, in addition to other international humanitarian law rules, prohibits making them an object of attack. “In reality Russian forces, in order to realize their efforts of seizing key cities of Ukraine like Kyiv are targeting civilian facilities like hospital, memorials. Furthermore, Russian response to the soldiers captured into the war is bringing our focus to Geneva convention of right of prisoners of war. The soldiers captured by Russian forces should be treated with respect and any sort of torture would entail serious consequences for Russia.

The current military actions of Russia are commensurate to constitute the commission of Crime of Aggression, which includes use of force against the sovereign, territorial integrity or political independence of another State, as elucidated under Article 8) of the Rome Statute of the International Criminal Court [ICC].

FALLACIOUS JUSTIFICATION GIVEN BY RUSSIAN AUTHORITIES

There is also mention of the term genocide by classifying the Russian actions as measure to prevent genocide.The Genocide Convention defines genocide as certain, specified actions intended to destroy in whole or in part a national, ethnic, racial, or religious group. There is no evidence that Ukraine engaged in any of the defined actions and certainly no evidence of an intent to destroy in whole or in part any group in eastern Ukraine. Even if the Ukrainian government had committed human rights abuses against Russians in eastern Ukraine, neither the Genocide Convention nor the U.N. Charter authorizes convention parties or U.N. member states to use force to remedy acts of genocide or serious human rights abuses. Moreover, Russian military actions are limited to these regions. Russia is making multi-pronged advancement towards the Kyiv. Even if we accept the argument of Russia that its actions are to free the people of eastern Ukraine the huge bloodshed done by Russian forces in the western and central Ukraine is difficult to validate.

Ironically Russian authorities are also taking the shield of “self-defense as ground for invading Russia. President Vladimir Putin and other Russian officials have suggested that Russia’s use of force is justified under Article 51 of the U.N. Charter has no support in fact or law. Article 51 provides that “nothing in the present charter shall impair the inherent right of individual or collective self-defense if an armed attack occurs against a member of the United Nations.” It’s clear on the face of it that Ukraine is neither have any intention nor capabilities to attack the gigantic power of Russia. Its apprehension that war would begin when Ukraine join NATO can also be rebutted by the fact that Ukraine’s journey to the NATO is still very long and there are high chances that all the member of NATO would never be in any consensus to induct Ukraine into the NATO. Even if we countenance this argument of apprehension of security a multipronged invasion from all the direction is completely disproportionate and runs the principle of “self-defense”. Therefore, the armed attack by Russia on Ukraine does not justify the test of proportionality and necessity.The concept of ‘anticipatory self-defence’, while novel, is not recognized in international law. The rigors of Article 51 stands within the strict confines of an ‘armed attack’ and does not allow for a perceived security threat beyond such parameters – which includes President Putin’s perceived threat of ‘expansion of NATO’.

The inability of international law and organizations like U. N in stopping this war even after more than 10 days of catastrophe is deeply illuminating and require serious deliberations. Russia is moving on untrammeled, expanding over cities over each day and ignoring the sanctions imposed by the west. Moreover, the widely recognized international protector of the peace United nation appears like a silent actor throughout the crisis. The United nation security council tried to pass a resolution against the Russian actions but due to the Russian veto power it also came to a stalemate. Furthermore, other states are worried on President Putin’s statement of reacting severely and leading to unprecedented ramifications by the Russia,

To restrict the violation of Internation law, the primary gatekeeper is United nation security council. Under article 24 of UN charter maintenance of international peace and the stability is the primary respobsibitly of united nation security council. One such resolution was drafted and put forward before UNSC on 26 February. Although the Russian veto has completely erased any efforts for the resolution to materialize into the reality. The apparent disagreement within the UNSC is apparent. The United nation security council cannot resort to any coercive means of resolving the dispute including the use of military force because of the obvious reason that Russia is one of the permanent members of UNSC.

With regard to the position of suspending Russia or stripping of its permanent membership from the UNSC as stipulated under Article 5 and 6 of the UN Charter respectively, it would require the recommendation of the same from the Council, which would again be subjected to veto, therefore making it an unviable alternative in front of big powers like UK or US.

Moreover, Russia is not the party to international criminal court .Thus, any efforts to of pursuing this litigation in that forum are also hard to believe as of now. This low to even none impact of international law is the thing that is given confidence to kremlin to continue their armed invasion of Ukraine while other international actors remain mere spectator in the whole process.

The Russian invasion of Ukraine is not only in violation of international law but also various humanitarian laws and appears to be unwarranted exercise of military muscle over a complete sovereign country. It has been suggested. The legal garb given to this attack by Russian authorities is also completely unfounded as both disputed regions of eastern Ukraine were already outside the control of Kyiv. Moreover, Ukraine is not going to make an imminent threat.

More important than all of that, the invasion have made the whole world and legal jurist contemplate once again over the effectiveness of international law in preventing conflicts into escalating in military confrontation in the world. Once again it was proved that international law is only effective in preventing small countries. A big superpower like Russia or US can very well act outside its realm and use their established position to advance their own interests the Russian convoys approach the capital of Ukraine and refugees continue to flee the land, world’s hope rests on ending this bloodshed as soon as possible. A reform of international legal order focusing on ending the hegemony of big power can really be the best way forward for that.

The blog is authored by Jeetendra Vishwakarma , student of BALLB at NALSAR University of Law