This research work seeks to address the issue of domestic violence from a different angle which is unrecognised, unaccepted, disbelieved and swept under the rug. It will explore the nature of abuse against men, cast a light on why men stay in abusive relationships and the effects of being abused. 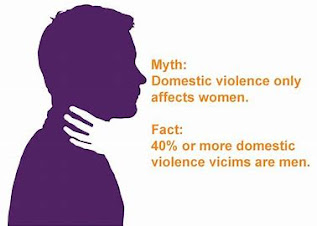 Furthermore, it will shed light on why violence against men is unrecognised, how society reacts as well as possible remedies that could help in dealing with the issue of abused men. When most people hear the term domestic violence, they often assume that a man is the aggressor. While this may be true in many reported cases. Domestic violence against men is more common than you think and it can cause a serious threat to its victims. Fortunately, as women, men are generally protected just as women under most domestic violence.

DIFFERENT ASPECTS OF CRUELTY AGAINST MEN

In India men are coming across various forms of cruelty against them by the opposite sex which are:

a) Legal cruelty: legal cruelty is a form of abuse which is used by women by misusing the state machinery to force a make partner or a husband to abide by their own demands. A family member or relatives of the wife is bound to abuse the men. Common among these it is the misuse of Section 498A of the Domestic violence Act 2005, rape or molestation laws, denying the child’s custody in a case of separation and maintenance laws

b) Economical cruelty: economical cruelty includes constant irrational demands on the husband by the wife or the wife’s family members. The demands can be in form of jewellery, purchase of real estate, expensive clothing, hospitality, feminine beauty products and lavish restaurants. Even if a man fails to meet the financial needs of the female partner they can be easily subjected to emotional and physical abuse.

c) Emotional cruelty: emotional cruelty it includes while a man is being forced to separate from his family and parents, demands for a separate resident or threats of police action and some legal recourse if the demands of the wife are not met. Emotional abuse is caused is there is non fulfilment of the needs of the wife.

d) Physical cruelty: with physical violence it has been discovered that the husband or the male partners have been punched, scratched, bit up and certain things have been thrown up at them by the female partner apart from the attacks with deadly weapons. In the absence of a legal system to protect men against such violence, victims get little or no medical attention at all and they are even unable to speak of their physical wounds due to non availability of law to protect them from abuse.

MEN ARE RELUCTANT TO REPORT ABUSE BECAUSE OF:

Judiciary plays an important role in protecting rights of men as well as women. In the current scenario judiciary emphasises on gender based law in clear articulation of ethics involved in handling gender based violence. Now judges should make an endeavour to understand the national and international aspect of the domestic violence, against men and women, before delivering the judgment. It is also the duty of three organs of the State (executive, legislature and judiciary) to take appropriate step to prevent violence against men and women. Indian judicial system provides appropriate procedure to protect the innocent and also afford opportunity of hearing, i.e., due process is followed in case of all the litigants immaterial of their status and position. After the judgment of the Hiralal P. Harosara and others V/S Kusum Narrotamdas and others[1],1 now men can also initiate the proceeding of the domestic violence. There are various judgments which provide justice even to men in the case pertaining to domestic violence also, provided their actions are not contrary to the provisions of the law established by the legislature, not only under Domestic Violence Act but also under various relevant Acts.

Judicial system of India establishes the procedure to protect the innocent person. The judicial system discovers and initiates appropriate action against the guilty and affords due process which is given under Indian constitution to all litigants. Thus, it is no more than reasonable to expect a Court system of both law and justice, where everyone can get justice. The judicial system provides redress to all cases of violence against women and to ensures accountable and who ever guilty is guilty shall be punished. But it is also true that the women face many obstacles when they seek relief from legal system.

Generally, the honourable trial court decide all the cases related to women and children country honourable Supreme Court has the original jurisdiction to hear the matter relating to the public interest litigation as well as writ petition on the issue of rape, murder of women including dowry death.

Although there are various Act which favours man but he judicial system while handling the matter of domestic violence against men should appreciate the actual fact and should go in deep to find the lacuna in the system which is faced in the society. Honourable Supreme Courts has wide discretionary power todecide the matter and can suggest the legislature the problem faced in the present era in domestic violence by men. Although there are various Judgment passed by the honourable Supreme Court in favour of men but still judicial system has to find out the root cause of the domestic violence by giving suggestion for implementing the Act and provide remedy to the men also. There are various cases which were decided by the Courts in our country in different Act which favours men are explained are as below.

Rajesh Kumar &Ors v. Sate of U.P[2] It was held that any false allegation which was made out by the wives against the relative of husband the matter must be referred to the family committee constituted by the District Legal service Authorities [DLSA] preferably compromising of three members and the constitution of such committee may be reviewed from time to time at least by district session judge who is also the chairmen of the legal service authority. The members of this committee are either the members of social workers, retired persons/wives of working officers. And each matter will be referred by the committee and the committee may have interaction with parties personally or by means of telephone. After the investigation the report will be submitted to the magistrate and if magistrate thinks that evidence produced and the incriminating material produced against the accused then and then

Arnesh Kumar v. State of Bihar[3],It was held that due to rampant misuse of the provision, it would be prudent and wise for the police officer that no arrest is made without reasonable satisfaction reached after some investigation to the genuineness of allegation, now maximum punishment given u/s 498-A is 3 years and u/s 4 of the Dowry Prohibition Act, it is two years with fine and there was a demand of Rs.8 Lacs, a maruti car, air conditioner, television set and when the fact was brought before the appellant notice, Husband supposed to marry another women, anticipatory bail was rejected by the courts . Now Section 498A is a cognizable and non-bailable offence has lent a dubious place of pride amongst provision that is used as a weapon rather than shield by disgruntled wives and it is the simplest way to harass is to get the relative arrested under section 498A.

In quite number of cases grand parents of husband, their relatives living abroad for decades are arrested. Thus it was held that it will be wise for the police that no arrest is made without reasonable satisfaction after some investigation as to the genuineness of allegation. So before arresting in the case of 498A IPC, police should comply S.41 of the Cr. P.C so that the parents of husband shall not be harassed by fear of arrest by the police.

The family structure and the society are rapidly changing and so as the norms and values in regard to gender violence. Men are physically, emotionally and emotionally abused by this spouse, relatives so as the law. Hence their problems be recognised as a social and public health issue thus appropriate strategies and interventions should be implemented. Each and every legislation must Include domestic violence against men as a punishable offence. Men and women are both pillars of our contemporary society thus there should be laws to protect both from spousal violence. The broad aim of this given study is to investigate the reason behind the domestic violence against men, the main objective which are:
• To analyse the legal provisions relating to domestic violence in India
• To analyse the regular laws in the laws of domestic violence
• The laws related to domestic violence

Domestic violence is a scenario whereby there is a serious power of abuse within a household, or any relationship. It undermines the basic rights of people because of gender, age, disability and is more vulnerable to abuse. It is also described as a social and criminal problem that can result in the death of any victim.

Domestic violence also involves killing, sexual assaults and physical pain. It also involves other forms of abusive behaviour such as financial deprivation, emotional abuse, neglect and exploitation. It has been a hidden problem which has got lasting effect especially on me. There isn’t any laws which supports and favour men ,all the laws are in support of women and in the society and tradition it is shameful for a men to be abused by a women that is why there is rapid widespread of suicide cases because men are emotionally stressed and abused to an extent that they have no one to turn to and because of the fear of being a laughing stock in the society. Even the United Nations Framework for nodal legislation on domestic violence, it states all acts on gender-based violence against women but it doesn’t include men.

There are always 3 sides to a story hence the people telling it and the truth. It is the duty of the law to listen to both the man and the women instead of automatically coming up to conclusions based on gender. They need to come up with their own of the truth based on their way of investigation, examinations and trainings. The truth is that men are abused and it is not taken into consideration by many people in the society and men are left with no-one to turn to and also keep it as a secret because they do not want to contradict the societal standards that has been wrongly placed on their gender.