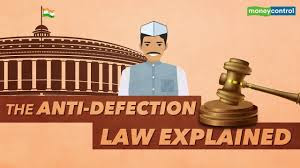 What is anti defection law and how it came into force?

Frequent changing of parties by the legislatures caused serious instability in the political system. For many years it brought pandemonium in legislatures as government fell. The infamous slogan “aaya ram gaya ram” was formulated in Indian politics after MLA of Haryana Gaya Lal changed his party thrice within a day in 1967.
To constrain such defection a bill was introduced by Rajiv Gandhi in 1985. The anti defection law is contained under the 10th schedule of the constitution which was added by the 52nd amendment act, 1985. The two grounds were mentioned under which member of legislature can be disqualified.

1. If he has voluntarily given up his membership of such political party; or

2. If he defies the edicts of his party on a vote this implies that a legislature abstaining or voting against the party on any issue can lose his membership of the house.

The law applies to both parliament and state legislature.

However, there is an exception provided in the 10th schedule stating that if there is a merger between two political parties and only if not less than two- third of the members of a legislature party concerned agree to the merger, in such situation neither the members who decides to merge with other political party or as the case maybe, of new party is formed by such merger or, if the members have opted to function as the separate group can be disqualified.
Role of the Speaker and Judicial Review under Anti-Defection Law
It is clear in the Anti-defection law, under the 10th Schedule the question of disqualification or otherwise is to be decided by the Speaker. Any prior intervention is ruled out, as the court only have the power of judicial review. Being a constitutional authority and as the head of the legislature it is an established precedent that the Speaker is not docile to the jurisdiction of the Courts, the speaker is supreme and has final authority in respect of the conduct of legislative business. However, if functioning as a quasi judicial authority the speaker’s office cannot claim any special privilege and it would definitely persuade judicial review.[1]

The Intent of Law

The legislation was aimed

The Manipur election 2017 emerged as a hung assembly. Although Indian National Congress three short for the necessary majority the governor invited the BJP to form the government with 21 seats.

Shri T S Singh, a congress nominated representative switched to BJP before it was invited to form the government. He was sworn in as a minister once BJP staked a claim and was invited, and continued to hold that office in BJP-led Government.

Subsequently, applications were filed before the speaker of the Manipur Lower House asking for his disqualification under Para2(1)(a) of the 10th Schedule, dissatisfied with the speaker the applicants approached the High Court which was also unsuccessful, consequently the applicants moved to the Supreme Court.

Issue was raised regarding Partisan speaker.

In the landmark case of Kihoto hollohan v. Zachillhu, Justice J. Verma, In his judgment observed that as an authority the speaker whose tenure depend on the will of the majority, the suspicion of bias could not be ruled out.

The same fear was reprised in the present case wherein the court said that the speaker either de jure or de facto continues to belong to a particular political party the parliament have to rethink and seriously consider amending on whether disqualification petition under 10th schedule of the constitution can be entrusted to the speaker who acts as an arbiter of such disputes.[3]

Nearly 3 decades old the use and abuse of anti defection law has been manifested in prolonged political crisis in Karnataka where the resignation of 15 MLAs on July 6 defeating the motion of confidence of H D Kumaraswamy who served as a chief minister for a year, it emphasized the tortuous working of India’s anti defection law.[4]

The exploitation of anti defection law by political party in the assembly election of Maharashtra in October 2019, the roller coaster ride in government formation of Maharashtra has been stretched for a longer time. While the congress hesitating in declaring a position and National Congress Party being at the centre of endless controversies, due to Ajit Pawar claiming deputy-chief ministership alongside chief minister Devendra Fadnavis, subsequently, Sharad Pawar warned the members of his party to be penalised if there is any switching of sides under anti defection law, Fadnavis led government was subjected to a floor test when Ajit Pawar resigned as deputy chief minister in less than 80 hours, the Fadnavis had to resign as a chief minister consequently Uddhav Thackeray was invited to form the government. The quarantining of MLAs in hotels to avoid horse-trading and retain majority was observed at peak during Maharashtra political controversies while forming the government.

The Madhya Pradesh Government was indecisive on the edge after Jyotiraditya scindia who served the party for 18 years resigned and joined BJP, 22 of the ruling congress MLAs also resigned and rebelled against chief minister Kamalnath.[5]

Sachin Pilot and 18 loyalist MLAs on 12 July 2020 went to Delhi from Jaipur claiming to oust the Ashok Ghelot led congress government in Rajasthan with the support of 30 MLAs, thus starting a government crisis in Rajasthan.

The meeting was scheduled at the Rajasthan Chief Minister’s house by Congress Legislature Party, and a warning was given to the all its MLAs that a stringent action would take place if they do not attend the meeting, Sachin Pilot and his supporting MLAs were also invited to discuss the issue but they denied, Sachin Pilot demanded the post of Chief Minister of Rajasthan and refused to listen to Indian National Congress, consequently, he was terminated from the post of deputy chief minister and also from the president post of Rajasthan Pradesh Congress Committee, the cabinet minister supporting him were also sacked by the chief minister Ashok Gehlot.

It was purported that Sachin Pilot and other rebellious MLAs have violated the 10th schedule paragraph 2(1) (a) and it was also clear that the supporters of the rebel leader cannot take the justification of merger also as they fall short of essential strength of two third majority however Pilot defended that mere expressing the discontentment does not mean he has voluntarily given up his membership under 10th schedule and therefore they cannot be disqualified under anti defection law. High court can permit them to take the floor test if the court accepts their views of not violating the schedule; nonetheless the rebels who voted against the Gehlot government will still be subjected to disqualification proceedings. [6]

Anti defection law ‘A Toothless Tiger’
Taking into account the recent crisis relating to 10th schedule it is clear that the anti defection law has failed to fulfil its objectives; it’s like a toothless tiger.

The anti defection law was made as a commitment by the political party to maintain the integrity and stability of the party system. Even after three decades the party hopping tactics has not been stopped, the contemporary bouncing of MLAs to victorious parties shows that they have no respect for this law.

The rationale behind the failure of anti defection law

Obscurity of the law.
The vagueness regarding at to what context voluntarily giving up his membership will be considered as defection, will it be considered defective if the legislator merely expresses his discontentment regarding his party or not attend the meeting scheduled due to internal dispute, if the mere expression encourages defection then in contrast it violates the fundamental right of freedom of speech and if only resignation is considered then the anti defection case against Sachin Pilot in Rajasthan political crisis should be treated as null and void, due to such ambiguity the law has been manipulated and misused by the defectors.

Partisan speaker.
It cannot be ignored that the speaker belong to a political party and the fact that the adjudicating power of defecting MLAs solely belong to the speaker, fully impartial judgment cannot be expected. The large scale defection and stalling the disqualification of the members by illegally rewarding them ministerial berth due to partisan speaker is a major loophole in the act which results in continuous exploitation by the parties to hold on to power. Also no time limit is specified in the law regarding decision on defection proceeding, apparently as the situation demanded the speaker either hastily pass judgment or delayed it for years.

A scourge of defectors.
Even after amendments the so called “aaya ram gaya ram” barrier was not fully removed as because the presence of shortcomings the newer ways to circumvent the law are being found by the hopping legislators as can be seen in the contemporary crisis in Telangana, Manipur, Maharashtra and Rajasthan.

The so called anti defection law which was enacted to prevent the defection but due to presence of many discrepancies the legislators had used it to facilitate and hide their defection.
The need for promotion of Intra-party democracy, power to independent authority to deal with disqualification to oust the decision of partisan speaker, considering taking into account recommendation of various commissions to rectify the loopholes such judicious amendment is required in anti defection law so that it can achieve its objectives otherwise this law will act as a paper tiger only.[7]

19 thoughts on “A Need to Over Hauling of Anti Defection Law to Achieve its Objectives: A Critical Analysis of 10th Schedule.”