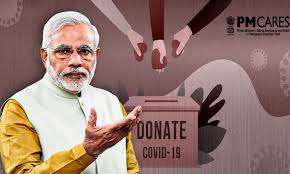 The “Prime Minister’s Citizen Assistance and Relief in Emergency Situations Fund” (PM CARES Fund) was set up by the Government of India on 28th March 2020 to fight the battle against the ongoing pandemic. The objectives of the fund are to render financial assistance as well as to undertake support assistance in the health crisis which also included the creation and up-gradation of the healthcare facilities in the state[i].

As per the notification dated 28th March 2020 by the Ministry of Corporate Affairs, the contributions made under this fund would also count as Corporate Social Responsibility (CSR) which is enshrined under Section 135[ii] of the Companies Act. This has resulted in contribution not only from individuals but from companies as well. Both public and private companies have actively contributed to the fund thus leading to thousands of Crores of wealth to conduct relief activities, procure proper healthcare equipment, and provide financial assistance.

CRITICISMS OF THE PM CARES FUND

Firstly, the PM CARES Funds which were created amidst the health crises has been facing huge criticisms due to the lack of transparency in it. The contributions made to the funds are tax-free and hence thousands of Crores have been received to date. There is no accountability and transparency for the same which has caused suspicion in the minds of the citizens. The fund is not covered under the scope of the Right to Information Act (RTI Act) which increases the chances of corruption and voluntary distribution of funds.

Secondly, while contributions to the PM CARES Funds are considered to be valid CSR, the same if made to the Chief Minister’s Relief Funds would not count as CSR. This has further led to the accumulation of funds in the hands of the central government rather than the state governments. The major burden of the relief operations lies in the state and thus donations to them should also be covered under the scope of CSR and should also be maximized to dispense the same at their choice.

Thirdly, According to the opposition party, the Prime Minister National Relief Fund (PMNRF) and the PM CARES Fund have similar objectives. As per the year 2019, the PMNRF had an unused amount of Rs. 3,800.44 crores, then why does the need for a separate fund arise? Government employees have somehow not been given an option to donate a part of their salary to the fund, this again has been criticized.

LACK OF TRANSPARENCY: THE BIGGEST FLAW

The PM CARES Funds have been highly criticized due to the lack of transparency. The funds do not fall under the scope of the Right to Information Act, and thus the public has no idea where the funds are being spent by the central government. Citizens of the country should have the right to know where the taxpayer funds are being used, but the fund eliminates the same. Even the opposition party is of the view that “humongous amount has been taken”[iii]and the same should therefore be made transparent.

In an RTI filed to release the fund’s trust deed, it was replied by the PMO that the fund set up is “not a Public Authority under the ambit of Section 2(h)[iv]of the RTI Act, 2005”[v]. Further, the Controller and Auditor General of India (CAG) has no right to audit the fund as well, this leads to secrecy and has questioned the intentions of the government as well. The rules of the funds are different when compared to the previously existing PMNRF.

Despite the lack of transparency in the funds received and spent, there also exists no transparency regarding the board of trustees. The only known board members are the PM, the defense, the home, and the finance minister. It was only after repeated questioning that the government released a notification on its spending an amount of Rs. 3,100 Crores for the battle against the health crises. Rs. 2,000 Crores were spent for purchasing “made in India” ventilators, Rs. 1,000 Crores were spent on the welfare of the migrant laborers and Rs. 100 Crores for the development of vaccines.  After this notification again there exists no whereabouts of the funds and how are they being utilized.

According to IndiaSpend report an approximate of Rs. 9,677.9 crores had been collected under the PM CARES Fund as of 20 May 2020. There lacks proper information as to how much fund has been collected and where has the said fund been utilized. To date, thousands have lost their lives to COVID-19 and one of the major reasons is due to lack of proper medical facilities and lack of financial assistance for the treatment. Moreover, the funds are allocated on a basis of favoritism as there is no transparency of the same.

While the fund has been named PM CARES Funds, the question still arises whether the Pm really cares or not? Thousands have died due to the health crises and there are a lot of people who are suffering from the impacts of the virus. The lack of transparency of the funds has just contributed to raising suspicion against the government and has led to huge criticism. If the taxpayer’s money is being used there should exist a proper mechanism to show the inflow and outflow of the cash. This would also help individuals to engage in the development of items that would be necessary to win the battle against the pandemic.

To maintain the trust of the citizens of the country the PM CARES Funds should be made transparent, so that the citizens may know where the funds have been spent to date. Moreover, the CAG should be allowed to audit the same and bring out loopholes in the expenditure made. The public should have access to the data of the PM CARES Funds as the money is being utilized for the nation’s benefit only. While the point of not disclosing the name of the donor is acceptable but the part wherein the total amount is not being disclosed is highly suspicious and has led to a “hide and seek” game between the transparency of funds and the right to information about the same.

[iii]PM Cares Fund has to be made transparent: Congress, The Times of India, (May 6, 2020, 12:34 P.M.https://timesofindia.indiatimes.com/india/pm-cares-fund-has-to-be-transparent-congress/articleshow/75570785.cms.