Due to growth and development in technology there has been enormous change in day to day life. The Internet has made communication and access the information easy through emails, chat groups, various social networking sites etc. wherein individuals can publish and spread information. This easy access misused by users for publishing defamatory statements in the cyber space. 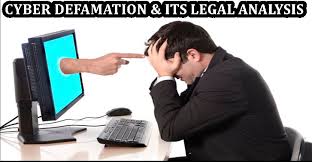 The main reason of increasing such misuse is that users do not have to reveal their true identity in order to send email or post messages on bulletin boards. Users are able to communicate and make such posting anonymously or under assumed names. Accordingly, the re-examination of existing laws relating to defamation is required, to allow for their possible evolution and ultimately their application in cyberspace.[i]

Cyber defamation is a new concept but the traditional definition of the term defamation is applicable to the cyber defamation as it involves defamation of a person through a new and a virtual medium.
Defamation means infringement of another’s right to his good name by making some maligning statement to someone other than that person. It means defamatory statement must be disclosed to a third person. If it is not disclosed to third person, then no defamation because of requirement of publication is not satisfied. Defamation is defined as “an intentional false communication, either published or publicly spoken, that injures another’s reputation or good name.”[ii]
In Cyber Defamation, internet or computer is used as a method of harming the reputation of the other person or lowering the reputation of a person in front of others.

SMC Pneumatics (India) Pvt. Ltd. v. Jogesh Kwatra (CS(OS) No. 1279/2001 ) was the first case of cyber defamation in India wherein the court passed an interim, ex-parte injunction order and consequently, the Delhi High Court restrained the defendant from sending derogatory, defamatory, obscene, vulgar, humiliating and abusive emails either to the plaintiffs or to its sister subsidiaries all over the world including their Managing Directors and their Sales and Marketing departments.
For proving the cyber defamation, there are three essentials-
1. The imputation made against a person should be published.
2. Such imputation shall be in the form of visible representations.
3. The intention behind making such imputations should be to cause harm or with the knowledge that it will harm the goodwill of the person.[iii]
In India, the liability of cyber defamation is two folds:
1. Primary writers-Person who has written the defamatory content and published it on the cyberspace.
2. Service providers- The ISP or bulletin board service providers who authorized for the publication of such defamatory content.
Cyber Defamation is civil as well as criminal offence. It is also a socio economic offence because when defamation done against institutions, corporate houses or organizations, this could also hamper the economic interests of the country as a lot of goodwill is attached to the face value/ brand value of such entities.

Right to Reputation or Right against Defamation is recognized as basic human right in international legal instrument. As per Article 12 of UDHR, reputation of individual should be protected from arbitrary attack on reputation and Article 10 of European Convention on Human Rights also recognize right to reputation as basic human right by way of imposing restriction on freedom of speech and expression.
The law of defamation under Section 499 of IPC, 1860 got extended to “Speech” and “Documents” in electronic form with the enactment of the Information Technology Act, 2000. The offence of defamation is punishable under Section 500 of IPC with a simple imprisonment up to 2 years or fine or both.

As per Section 469 of IPC, 1860, if forged document or forged electronic record harm the reputation of any person shall be punishable.
Section 503 of IPC, 1860 deals with Criminal Intimidation and it also includes criminal intimidation by use of emails or other electronic means and Section 124A of IPC deals with Sedition. Wherein when anyone defame a minister or government official in cyber space or in any other place
The Section 66A of the Information Act, 2000 does not specifically deal with the offence of cyber defamation but it makes punishable the act of sending grossly offensive material for causing insult, injury or criminal intimidation.

But the provision has been struck down by the Supreme Court of India in case of Shreya Singhal and Ors. v. Union of India in March 2015. Thus now there is no provision under Information Technology Act 200 which specifically deals with Cyber Defamation.
The chiefly aim of Section 67 of the Information Technology Act, 2000 is curbing the increasing number of child pornography cases and does not encompass other crimes which could have been expressly brought within its ambit such as cyber defamation.

As per Section 79 of the IT Act, 2000 ISPs can be held liable in the following situations-
1. If they have conspired, abetted or induced in the unlawful act,
2. If, they fail to expeditiously remove or disable access to any information, data or communication link upon receiving the knowledge or on being notified by appropriate Government agency that such information, data or communication link is being used to commit unlawful act without interfering with the evidence;
The liability of Intermediary according to safe harbour rule depends upon the answer to three questions:
1. “Intermediary” was itself was involved in the commission or creation of the content
2. The intermediary controls its content.
3. The varying degrees of knowledge of the information and control over it.
Freedom of speech and expression is Fundamental right which is provided under Article 19 of Constitution but right to free speech cannot mean that a citizen can defame the other as it is held by Supreme Court in Subramanian Swamy v. Union of India (( 2016) 7 SCC 194)

The legislator has to make a balance the competing interest between individual rights such as privacy and free speech, and the need to protect the integrity of the world’s public and private networks.
The present laws in India do not have adequate approach towards cases of cyber defamation. Undoubtedly the Act is a historical step in the cyber world still the efforts made by Indian government are not sufficient enough to curtail the rate of Cyber Defamation in India in cases of extraterritorial jurisdiction. Though it has provided with the provision to deal beyond the territorial limits but it has not given any framework for its execution It can be recommended that, Defamation laws should be sufficiently flexible to apply to all media. A balance will always need to be struck between freedom of expression and reputation.