Surviving Sexual Polity has defined violence as “any physical, visual, the verbal or sexual act that is experienced by the woman or girl at the time or later as a threat, invasion or assault, that has the effect of hurting her or degrading her and/or takes away her ability to contest an intimate contact”. 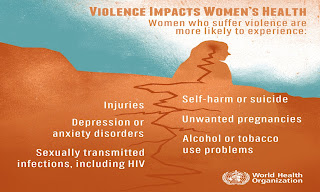 The world health organization is one of the organizations in the world which deals with the protection of women in regards to violence against women.

Dr Joanne Liddle modified this definition as “any physical, visual, verbal or sexual act that is experienced by the person at the time or later as a threat, invasion or assault, that has the effect of hurting or disregarding or removing the ability to control one’s own behaviour or an interaction, whether this is within the workplace, the home, on the streets or in any other area of the community”.

This research seeks to shed light on the woes and cries of women all around the globe in regards to the sexual , emotional, physical violence they face as a result of socio-economic and political policies that cause their agony .

Reasons and how violence against women happens.

Violence against women happens in families, communities and in the state itself this is often as a result of some of the ill practices in all these places discussed above, this is mostly as a result of the way women are regarded in families, societies, and the state itself.
1. In families people are taught to accept the hierarchical gender relations in which there is a division of labor between the sexes, which is degrading in nature, by which the women and men in the households are given a sense of discrimination whereby the women is characterized as the weaker sex as compared to women as outlined in the discussion below.

· Under this notion , as it is said charity begins at home ,in households the hierarchical relations begin, in which both males and females are given a sense of discrimination where females are regarded as the weaker people in the households and do not hold a place in decision making and the male party is given the upper hand in all family decisions and in terms of inheritance the male child gets everything at the expense of the female child . Thus , instilling an idea in the male child that he is the only capable gender .

1) The community which is the social, economic, and religious institutions perpetuates the control of males over women’s sexuality , mobility, and labor. Thus, society itself is somewhat a key player in violence against women as a result of the societal norms that given the society into believing in a Patriarchal society by which men control women using all kinds of abusive means all in the name of being man.

· The societal beliefs that are headed by patriarchal norms, in which patriarchy prevails in all issues and are given control over women. Women do not necessarily have a say or a stand. In cases where women are vocal they are regarded as rebels in the society all due to the societal norms and religious beliefs. Women are prone to violence because of all this, they cannot stand against ill practices simply because they are regarded as the weaker gender.

2) The state to some extent supports the idea of patriarchy by the enactment of discriminatory application of the law by which the law is mostly in the favor of man at the expense of women. Since law comes from customs the customs which are seen to be oppressive of women the laws enacted by the state turn to be in favor of the male making it easy for women to experience violence and not able to stand up because the laws which are supposed to be protecting them are rather supportive of their perpetrators
· Women generally do not have anywhere to turn to because of the state’s enactment of discriminatory application of the law

Various forms of violent treatment against women, all based on gender:

1) Because of the gender women, a woman is subject to rape, female genital mutilation, female infanticide, and sex-related crimes. This reason relates to society’s construction of female sexuality and its role in the social hierarchy. The societal ills of female circumcision have put up a picture in which women are objects and objective of the societal norms which are abusive in nature, the picture created by the society to men in regards to women makes them objects on good for one thing which is childbearing and sexual activities, thus making women vulnerable to violence. Women are not allowed to say no to anything that men say, their No is always a yes because they have been made that way by society and its ill practices.
2) For being in a relationship with a man, a woman is vulnerable to domestic violence, dowry murder, This reason relates to society’s concept of a woman as property and dependent on the male protector, father, husband, son. As a result of the dowry paid for a woman by a man she automatically becomes the property of a man and is subject to violence all in the name of dowry. As when a good is purchased it becomes the property of the person who paid for it so it is towards the woman and whatever the person wishes to do with the good No one opposes because it is his property. This is the same fate women suffer, they are subject to violence, murder, rape as a result of the dowry.

· In this context women are generally viewed as man’s sex tools and a property of a man simply because men is “the head of the home”.In Africa, a man is able to cheat on a woman and get away with it simply because of the fact that it has been said that a man is a man as if women do not have the feelings as man possesses.

3) For belonging to a certain social group, in times of war, riots. Or ethnic, caste, or class violence, a woman may be raped and brutalized as a means of humiliating the community to which she belongs . Making women a humiliating tool for men to use in order to humiliate each other. This also relates to the male perception of female sexuality and women as the property of men. Combining these types of abuse with the concept of hierarchical gender relations, a useful way to view gender violence is by identifying where the violence begins.

Categories of violence against women

1) Violence can be physical for example battering, sexual assault, both at home and at work
2) Psychological abuse which can also be known as emotional abuse
3) Deprivation of resources for physical and psychological well-being health nutrition, education, means of livelihood
4) Commodification of women which is women trafficking, forced prostitution

Current circumstances on Violence against women in accordance with WHO

Almost one third (30%) of all women who have been in a relationship have experienced physical and/or sexual violence by their intimate partner. The prevalence estimates of intimate partner violence range from 23.2% in high-income countries and 24.6% in the WHO Western Pacific region to 37% in the WHO Eastern Mediterranean region, and 37.7% in the WHO South-East Asia region.

The violence towards women causes lifetime deadly outcomes and have negative repercussions on both women and the children they bear .these areas noted below
1) The have an impact of causing suicides on the part of the violated woman
2) Violence against women causes injuries on women noticeable and internal injuries which have a lifetime impact on the victim
3) Sexual violence against women can cause unintended pregnancies sexually transmitted infections such as HIV and gynecological problems
4) Violence against pregnant women can cause stillbirth, pre-term birth miscarriages, or even can cause the birth of abnormal children
5) The other repercussions are depression, post-traumatic stress, and other anxiety disorders, sleep difficulties, eating disorders, and suicide attempts.

To achieve lasting change, it is important to enact and enforce legislation and develop and implement policies that promote gender equality by:
Putting an end to discrimination against women in marriage, divorce, and custody laws
Stopping discriminatory laws of inheritance in families
Empowering women by employment
Creating accessible groups that deal with women and their agony and that help against violence against
Advocate making violence against women unacceptable and for such violence to be addressed as a public health problem.
Provide services towards victims of such abuses like for example trained professionals who know how to go about such issues and help individuals
Prevent recurrence of violence through identifying the women and children facing such problems and imprisonment of perpetrators of such violence
Promote educating women on standing up towards violence and educate women of their rights as women

The growing issue of patriarchal based societies should be put to an end in order to curb the rates of violence against women. By doing so as charity begins at home, the idea of patriarchy is erased from where it all begins that is in the households and males do not grow up to be monsters but rather a supporting gender towards the uplifting of women and gender equality.Women are to be educated in order for them to be empowered and not just sit back whilst they’re facing these societal woes.