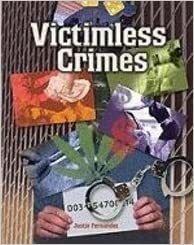 For this blog, we shall discuss a distinct type of crime known as a victimless crime. A victimless crime is a specific activity that is unlawful but does not directly abuse the right or privilege of some other person. These crimes are private and sometimes, these acts are even consensual i.e. voluntary acting. These crimes do not infringe the rights of an individual, or a group of individuals but they rather affect the morality of the society and diminish the quality of life of the people who live in that society. Victimless crimes include pornography, gambling, prostitution, drug usage, betting, public nudity, etc., and do not explicitly harm an individual’s rights in any way. Such acts are committed because the products and services obtained by these acts are in high demand and are profitable. Several victimless crimes listed above occur because of the desire to get illegal items and services that are popular and beneficial for the crooks who commit such crimes. There are many discussions on whether to penalize these crimes or decriminalize them. Let’s discuss it more in detail.

The most significant feature of a victimless crime is that the accused individual has hurt nobody. Such crimes reduce the need of the ordinary public to reach out to the police or move the judicial system. The thing to be noted is that “If there is no victim, then there is no complainant.” Since there is no victim, nobody has an interest in complaining to the police or moving the courts and presenting any evidence against the person who has committed such an act. In addition to this, such crimes have a low rate of visibility. In other words, they generally do not come within the purview of the general public’s concern. Such crimes can only be recognized by thorough police investigations or by making specific laws about that act. This is why these acts are still committed daily because the products or services obtained by these acts are in very high demand and can be used to gain profits. Although these acts do not harm anybody or violate an individual’s rights, they still harm the moral fabric of the society, opposing the norms that are required to be followed by the people tomaintain morality, quality of life, and standard of living in the society.Let’s take an example, a person who maintains a brothel in the countryside is employing young village girls in the brothel to keep it running and make huge profits and nobody reports that man’s actions as he does not violate anybody’s rights. Instead, he is bringing pleasurable services to the people who visit that place and is profitable for the man himself. Now, if we look at this example closely, no harm is being inflicted upon others by that man’s actions but they do degrade the quality of life in the society and severely affect the moral fabric of the society in the long term. Such actions will certainly affect the basic beliefs of the general public and damage public opinion.

In Pradeep Shah v. Unknown in 2014, it was quoted by the Rajasthan High Court that, “We are not oblivious of yet another category comprising ‘victimless’ crimes, where the act which violates the law of the land does constitute an ‘offence’ but there is no visible ‘victim’ of the crime although such like crimes have depraving effects on the societal morals and values. Such an offence includes situations where an individual acts alone or there are consensual acts of more than one participant. This is, however, not an issue raised before us and need not be further alluded.” It was observed that such crimes severely affect societal morals and values. Despite such crimes being of harmless nature and without casualties, these acts do violate the law of the land and meddle with the instrument of law. A similar verdict was observed in Tata Steel Ltd vs M/S Atma Tube Products Ltd. & Orsin 2013 as well.

Should these acts be decriminalized or penalized? – An Analysis

Many people argue that these acts should be penalized and many argue otherwise. There are a few who believe that such harmless crimes shouldn’t be given any heed because nobody is getting hurt, nobody’s rights are being violated and it is profitable for the people because of the services and profits rendered. Others believe that decriminalizing such acts would cost morality, the standard of living, decrease public satisfaction, damage public opinion, and quality of life in society.Victimless crimes undermine the protection and satisfaction of the general public because such acts attack the people’s beliefs and expectations of a good standard of living. It is a fact that none of the people who are engaged in a victimless crime would report it to the police or concerning authorities. This is why to deal with such acts, the police and authorities should participate in broad heeding, wiretapping, and observation of the wrongdoers and general public. Such crimes always tend to meddle with the law of the land. A person who commits a victimless crime is generally unaware of the act that is being committed by him and does not know about its nature as well and is usually the victim of the crime himself. For instance, a person driving while talking to someone on call isn’t harming someone but if he gets in a mishap, he is sure to injure blameless people along with him. This is where the concerning authorities need to be more observant and stricter. Society is overall improved by recognizing such victimless crimes and the offenders.There are many waysand methodologies to reduce victimless crimes.For example, there are supply decrease strategies that are specifically about decreasing the inventory of the items on which the wrongdoers thrive, such as the supply of drugs. Other methodologies include anticipation, treatment, and discipline. All of these strategies and methodologies include programs to limit drug consumption, prostitution, and betting which would lead to a decrease in the rates of commission of such crimes.The concerning authorities and the government are responsible for enacting such strategies and laws to put a stop to these acts.

To preserve and uphold the moral standards of the society and protect the quality of life in the society, I believe that the aforementioned acts need to be penalized by the Government and should be strictly recognized by the public as well as the concerning authorities so that such acts can be dealt with properly. I strongly believe that certain norms and rules are required to be followed by the ordinary public to maintain the quality of life and standard of living of the society. I am completely against decriminalizing such acts because they attack the core values of the society, if not the rights of an individual; disparage the quality of life. In addition to this, decriminalizing such acts and actions of the wrongdoers will just promote the usage of illicit items, prostitution, betting, and other victimless crimes mentioned above and will attract more people to engage in such activities, especially the youth. Even if no harm is suffered by anybody, in the beginning, it is certain that in the long run there will be casualties and such acts will cause harm to the ordinary public as well as the laws, norms, and code of conduct. To conclude, acts like gambling, betting, prostitution, not obeying traffic norms and trespassing should be penalized to promote the well-being of the people, protect the moral values and public interest and help in flourishment of the society.