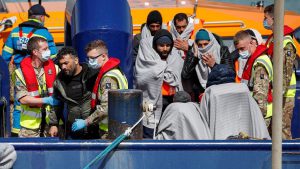 Human rights are the inherent and inalienable rights that everyone is entitled to and is the fundamental right that can be accorded to an individual. Even Article 1 of the Universal Declaration of Human Rights (1948) says “All human beings are born free and equal in dignity and rights”.[1]Further Article 2 of the Universal Declaration of Human Rights (1948) says “Everyone is entitled to all the rights and freedoms outlined in this Declaration, without distinction of any kind, such as race, color, sex, language, religion, political or another opinion, national or social origin, property, birth or another status. Furthermore, no distinction shall be made based on the political, jurisdictional, or international status of the country or territory to which a person belongs, whether it be independent, trust, non-self-governing, or under any other limitation of sovereignty.” [2]Taking these provisions on a broader note, an individual’s right to seek asylum also comes into the picture because it has been witnessed since time immemorial how people are persecuted and massacred owing to different factors due to which, people resort to seeking asylum in a foreign country for which, ‘Right to seek Asylum’ is an important element of an individual’s human right.

Recently, “UK and Rwanda have signed an MOU regarding the outsourcing of the immigrants/asylum seekers from the UK to Rwanda for which, the UK has claimed that initial assistance of 120 million pounds would be made to Rwanda for the settlement of the asylum seekers in the host country and this settlement will last for 5 years further which can be renewed upon mutual agreement.”[3]

Under the UK-Rwanda agreement, the asylum seekers would be deported to Rwanda on aircraft carriers and other necessary escort facilities would be provided by the UK for which, initial financial assistance of 120 million pounds would be made by the said country. But before this exportation, the UK will make a pre-screening test as a part of its protocol to garner and make a database of the information received from the asylum seekers and the country will have to transfer all such information to Rwanda for the settlement and rehabilitation of the asylum seekers. After the deportation is done, Rwanda will have to make settlements of the ‘Asylees’ (the one who seeks asylum), provide basic amenities and day-to-day utilities, and provide useful employment, medication, and other things in conformity with the international laws and conventions[4].

To make it simpler, Rwanda will also have to make its separate database to tally and resettle the asylum seekers efficiently. Even if an individual is not to be tallied as an ‘Asylee’, he/she would be provided with the necessities and proper medication and then may be sent back either to the UK or his/her native country. Also, if a legal claim has been made up against the UK regarding the deportations made under the agreement, then the UK can ask Rwanda for any information as may be required to which, Rwanda will be bound to make it.

RAMIFICATIONS OF THE AGREEMENT

The UK government has claimed that such an agreement has been signed to curb 2 things- Firstly, the illegal immigration of asylum seekers from neighboring countries and, secondly, to curb the illegal trafficking of such immigrants when they resort to illegal deportation without any authorization. However, such tall claims made by the government do not appear to be in the right place and cannot take the right direction for there are multiple issues that the country and most importantly, the asylees can face. Firstly, if the asylees are deported to an African nation that is itself facing human rights issues, the chances of ‘Illegal Trafficking’ may increase which will ultimately make out this agreement to be futile in curbing the trafficking issues that are alleged to be witnessed by the UK.

Secondly, Rwanda even after witnessing a rapid economic and societal development after the 1994 Hutu-Tutsi faceoff, is according to the “Human Rights Watch’s World Report of 2022, still ingrained with various ‘basic economical and human rights issues’ like there is lack of quality education, the country is devoid of vast land for settlement purposes and primarily, the citizens themselves have not been and are not entitled basic fundamental rights and freedoms like freedom of speech and expression, freedom of expression, etc, due to which, cases of extrajudicial killings, political killings, arbitrary detention have become a new normal thanks to the tyrannical rule of the President of Rwanda, Paul Kagame.[5]”It is ironic to see how the UK has, for the resettlement of the asylees, agreed with a country that is itself devoid of many facilities and basic human rights to which everyone is entitled.

Thirdly, since such an agreement has been entered into by a giant economic nation, it will have a ‘Precedent Effect’on the other nations to pursue the same resettlement policy and such effect can be seen in the case of Denmark which is also embarking upon adopting such a policy and that too with Rwanda, making the “International Convention of Refugees (1951)” a repository of provisions for the rights of the refugees but no use.

Fourthly and most importantly, the agreement would come out to violate many International Treaties and Conventions and a few of them are- Article 33 of the UN Convention on Refugees (1951) says, “No Contracting State shall expel or return (“refouler”) a refugee in any manner whatsoever to the frontiers of territories where his life or freedom would be threatened on account of his race, religion, nationality, membership of a particular social group or political opinion.”[6]So the act of externalizing the asylees to a third country like Rwanda will lead to Refoulement which is against the principles and in violation of Article 33 of the Convention to which, the UK is a signatory.

This agreement is a blatant violation of Article 2 of the Universal Declaration of Human Rights (1948) since it says that “no distinction shall be made based on the political, jurisdictional or international status of the country or territory to which a person belongs, whether it be independent, trust, non-self-governing or under any other limitation of sovereignty”.[7]This agreement is also a violation of Article 3 of the Convention against Torture and other Cruel, Inhuman, or Degrading Treatment and Punishment (1984)to which the UK is a signatory and which says, “No State Party shall expel, return (“refouler”) or extradite a person to another State where there are substantial grounds for believing that he would be in danger of being subjected to torture.”[8]Thus by this provision, the UK can flout another international convention. Although these are the International Treaties and Conventionsare not binding on either of the nations but through this agreement, the UK government has even flouted its statutory law- ‘The Immigration and Asylum Act (1999)’ which specifically entails a provision that the asylees can seek the asylum in the country and can also claim other assistances.

Fifthly, the asylees who after being unsatisfied by the deportation to Rwanda, can again go for their backdoor entry by crossing the English channel and making an illegal entry into the country with no legal permit and authorization, thus making the objective of the agreement to be futile.

The asylum agreement entered into between UK-Rwanda has serious ramifications be it economically, socially, or on the human rights basis. The agreement has so been criticized by the human rights watchdogs that the European Court of Human Rights had to intervene to ground the first deportation that was allowed to make its fleet on the 14th of June, 2022. Even if according to Article 14 of the Universal Declaration of Human Rights which says that “Everyone has the right to seek and to enjoy in other countries asylum from persecution.”, an individual has the right to seek but not the ultimate right to have the asylum mandatorily, still it is the duty of any nation being a signatory of UDHR and as a matter of humanity and social values, the asylees need to get a place where they can resettle and live peacefully and the UK being an economically rich nation cannot ward off its duties to provide a place for resettlement since it can have a precedent effect on other nations and can prove to be catastrophic for the refugees worldwide.

Hence this agreement needs a revisit by both the nations and should come up with a proper and planned policy that can suit the nation as well as the asylees and for this, certain measures in the agreement can be included like a planned town in the outskirts of the cities of England can be provided to the Asylees having all the basic amenities and facilities in addition to the employment to them for their daily living and earning wages. In turn, the state can charge a reasonable tax on them from their wages to build a corpus fund for the asylees and their needs and by this, the asylees can in a period, get integrated with the main course of the cities and other institutions.