Introduction to the Concept of Talaq

Talaq is an Islamic divorce, which is sanctioned by the Quran. Talaq is the repudiation of a Muslim marriage by the husband. Under Muslim Law, the husband has the right to give talaq to his wife at any point of time, without stating any reason. Under the Islamic religion, dissolution of marriage can take place in four ways, i.e., by husband, by wife, by mutual consent, or by judicial proceedings. A husband can pronounce talaq by ‘Talaq-E-Sunnat’ or by ‘Talaq-E-Bidat’. ‘Talaq-E-Sunnat’ is further divided into ‘Talaq-E’Ahsan’ and ‘Talaq-E-Hasan’. The term ‘Talaq-E-Bidat’ is also known as ‘Triple Talaq’. 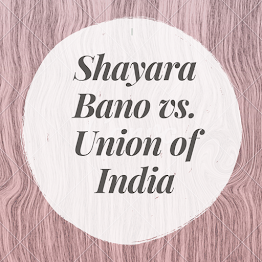 Under Triple Talaq the husband pronounces ‘Talaq, Talaq, Talaq’ at once and repudiates the marriage. Under this form of Talaq, the parties to the marriage have no time for arbitration settlement or reconciliation. This form of Talaq cannot be revoked once it is pronounced. Moreover, a Muslim marriage which has been dissolved via Triple Talaq then the husband cannot remarry the divorced wife until she has married another man and received a divorce from him. Until she is remarried to another individual and divorced she is considered as ‘Haram’ for him. Triple Talaq is mental cruelty against Muslim women as the husband can give talaq at any time except the iddat period and also without stating any reasons behind his actions. Triple Talaq was legalised by The  Muslim Personal Law (Shariat) Application Act of 1937 which gave a Muslim husband special privileges over his wife.

Shayara Bano vs. Union of India

Shayara Bano files a writ petition in the Supreme Court. She challenged three practices of Muslim law. Firstly, instant triple talaq (Triple Talaq is when the husband pronounces ‘Talaq, Talaq, Talaq’ at once and repudiates the marriage.) Secondly, nikah halala (Muslim marriage which has been dissolved via Triple Talaq then the husband cannot remarry the divorced wife until she has married another man and received a divorce from him.) Lastly, polygamy (husband to marry more than one wife).

In February 2017, a five judge-bench was formed for the hearing of this matter. The bench consisted of Chief Justice of India Jagdish Khehar, Justice Abdul Nazeer, Justice Kurian Joseph, Justice Rohinton Nariman, and Justice U. U. Lalit.

The petitioner of the case was Shayara Bano and the Respondent were Rizwan Ahmed, Union of India, Ministry of Law & Justice, Ministry of Women & Child Development, Ministry of Minority Affairs, National Commission for Women, and All India Muslim Personal Law Board.

This issue was raised because if Instant Triple Talaq was an essential religious practice then the Supreme Court cannot challenge, modify, repeal, or change it.

Chief Justice of India Jagdish Khekar and Justice Abdul Nazeer opined that Triple Talaq is a practice under Muslim Personal Law. Under Article 25 of The Constitution of India, every citizen has the Right to Religion, and thus, these practices are protected under Article 25 of The Constitution of India. They further stated that the judiciary cannot decide on such matters instead the Parliament shall make a call. So they suggested that the judiciary should make a stay on this matter of ‘Triple Talaq’ for six months.

Justice Kurian Joseph opined that the practice of Instant Triple Talaq is un-Islamic as it lacks two prerequisites that are arbitration and reconciliation. Thus, it is not an essential religious practice under Muslim Personal Law.

The punishment to be awarded to the offender of pronouncing triple talaq shall be three years of imprisonment along with a fine.

Legal Development in the implementation of the judgement

Main elements of the Bill [Muslim Women (Protection of Rights on Marriage) Act, 2019]

The Act declares Triple Talaq, whether in written or in the electronic form to be void (in-law) and illegal. The Act makes Triple Talaq a cognizable offence with imprisonment up to three years along with fine.

The Act declares that only the wife (married woman) against whom talaq has been declared; or any person related to her by blood or marriage can file the case on her behalf.

Hence, Triple Talaq was declared unconstitutional as it was violative of the Fundamental Rights of Muslim women. Making changes in the Muslim personal law for bringing justice was a great step taken by the Indian judiciary. Just like the Sati practice among Hindus was prohibited similarly the practice of Triple Talaq was prohibited for the betterment of the society.

This article is written by Sneha Mahawar a student at Ramaiah Institute of Legal Studies.