There are many social practices prevalent that reflect social injustice behind the face of religion. The personal law were originally drawn from divine sources. It reflected gender dominance since the interpreters of “religion” were mostly men. The process of reforming evil practices began during the British period where the reformers removed some evil practices like Sati, Child marriage etc. But the reformers forget to remove the evil practice of Triple talaq. 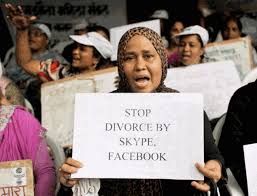 During the early 21th century, There have been a rising peoples movement to get rid of Triple talaq. Talaq in its original sense means repudiation or ending the marriage. Under Muslim law, a marriage is a civil contract between a man and a wife, but still the husband enjoys a special privilege over her wife. That means that a husband can divorce her wife anytime after marriage but her wife cannot. Thus the talaq has been described as a “one sided engine of oppression” in the hands of Muslim predominant male members.

There has also been a conspicuous silence among the law makers when it comes to the practice of ‘Nikkah Halala’(a practice where the women is required to marry and get physical with another person before she can remarry her older husband who had divorced her thrice.)

The main idea behind this is not to bring out the defects under Islam, but to remove the orthodoxy of all religions and cultures which oppose the rights of women, girls and children. For many a centuries, Muslim women have been fighting for the rights under Islamic laws related to marriage, divorce, succession etc. Accordingly, this practice was against the Article 14 which guarantees the right to equality, the SC held.

It has been pointed by Justice Krishna Iyer in a well congruous manner that “Islamic law is more sinned against than sinning in A. Yousuf Rawther v Sowaramma. Even in old case of Moonshee Buzloor Ul-Raheem v Luteefut-Oon-Nissa) Privy council held that “dissolution of marriage by talaq is a whimsical act of the husband to renounce his wife at any stage of life at his own pleasure, at any cause.

Triple Talaq in relation with the Indian Constitution

Article 25 of the constitution guarntees right to freedom to conscience and the right to profess, practice, and propagate religion. The right guaranteed like all the other constitutional rights is not absolute. It is subjected to certain restriction ad does not protect religious practices that can negatively affect the welfare of its citizens.

As a result, article 14 overrides article 25 which guarantees right to equality as Triple Talaq denies ssuch equality. However article 2 of the Muslim personal law (Shariat) recognizes Triple Talaq as valid, and also bringing it under the ambit of article 13(2), which states that the state shall not make any law which takes away or abridges the fundamental rights conferred by part III of the constitution.

The SC on 22nd August 2017 in Shayara Bano v. Union of India described the practice of instant triple talaq as unconstitutional by the five judge-bench comprising of one chief justice, Justice Jagdish S Khehar Justice S Abdul Nazeer, Justice Kurian Thomas, Justices Rohinton F Nariman and Uday U Lalit. The judgement declared the practice as unconstitutional by a majority view of 3:2.

More than a thousand year of practice comes to an end. The Muslim women’s are totally dependent on their husbands. A marriage in Islam is stated as a civil contract where the women treats their husbands as idol. Trival fights between the husband and the wife happens in the marriages, but in Muslim religion that doesn’t mean you break off the matrimonial tie and leave your wife’s and children on the street.

As rightly argued by the polular political leader Zoya Hasan, she argued for the need to carve out more codification law for the Muslim women apart from the Muslim dissolution of Marriage Act 1939, Muslim personal law Act,1937. And most recently the Muslim women’s protection on right of divorce Act of 1986. Some men also abused this right of triple talaq to get rid of their existing women and marry the new womens and have often abused this right to get more and more dowry from the women’s family.
Before the judgement of the Supreme Court, men often abused his right by pronouncing talaq three times through whatsapp, facebook, emails etc. and other mode of modern technology. Marriage is sacred institution and a gift of god, where both the parties remain freely and start their own family, but in this instance, the women remained under the fear of Triple Talaq and were forced to live as a slave.
There are many instances where the Talaq has been given on very small and petty issues. Practice of talaq-e-biddat violates the basic human rights guaranteed to a citizen.

Now talking about the sugestions, the state should encourage its participation not in any religious code, but should focus on the secular code. It should ensure that all the religious code of any religion are not violative and against the basic human rights. The state should also encourage the idea of Uniform Civil Code (UCC). There is also a need to launch various awareness campaign against the discriminations that the Muslim women faces in everyday society.