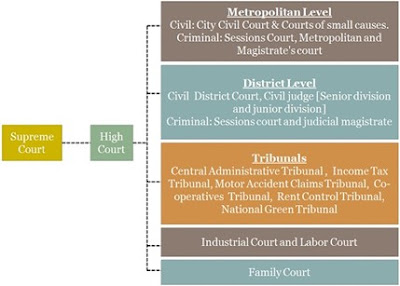 The term ‘Tribunal’ is derived from the word ‘Tribunes’, which means ‘Magistrates of the Classical Roman Republic’.  Tribunal is referred to as the office of the ‘Tribunes’ i.e., a Roman official under the monarchy and the republic with the function of protecting the citizen from arbitrary action by the aristocrat magistrates. A Tribunal, generally, is any person or institution having an authority to judge, adjudicate on, or to determine claims or disputes – whether or not it is called a tribunal in its title

Tribunals were not part of the original constitution, it was incorporated in the Indian Constitution by 42nd Amendment Act, 1976.

Articles 323 A and 323 B differ in the following three aspects:

Article 262: The Indian Constitution provides a role for the Central government in adjudicating conflicts surrounding inter-state rivers that arise among the state/regional governments.
n Tribunals in India

Administrative Tribunals was set-up by an act of Parliament, Administrative Tribunals Act, 1985. It owes its origin to Article 323 A of the Constitution. It adjudicates disputes and complaints with respect to recruitment and conditions of service of persons appointed to the public service and posts in connection with the affairs of the Union and the States.

The Administrative Tribunals Act, 1985 provides for three types of tribunals:

It has jurisdiction to deal with service matters pertaining to the Central Government employees or of any Union Territory, or local or other government under the control of the Government of India, or of a corporation owned or controlled by the Central Government. The CAT was set-up on 1 November 1985. It has 17 regular benches, 15 of which operate at the principal seats of High Courts and the remaining two at Jaipur and Lucknow. These Benches also hold circuit sittings at other seats of High Courts. The tribunal consists of a Chairman, Vice-Chairman and Members.The Members are drawn, both from judicial as well as administrative streams so as to give the Tribunal the benefit of expertise both in legal and administrative spheres. The appeals against the orders of an Administrative Tribunal shall lie before the Division Bench of the concerned High Court.

It is a military tribunal in India. It was established under the Armed Forces Tribunal Act, 2007. It has provided the power for the adjudication or trial by AFT of disputes and complaints with respect to commission, appointments, enrolments and conditions of service in respect of persons subject to the Army Act, 1950, The Navy Act, 1957 and the Air Force Act, 1950. Besides the Principal Bench in New Delhi, AFT has Regional Benches at Chandigarh, Lucknow, Kolkata, Guwahati, Chennai, Kochi, Mumbai and Jaipur. Each Bench comprises of a Judicial Member and an Administrative Member.
The Judicial Members are retired High Court Judges and Administrative Members are retired Members of the Armed Forces who have held the rank of Major General/ equivalent or above for a period of three years or more, Judge Advocate General (JAG), who have held the appointment for at least one year are also entitled to be appointed as the Administrative Member.

The National Environment Tribunal Act, 1995 and National Environment Appellate Authority Act, 1997 were found to be inadequate giving rise to demand for an institution to deal with environmental cases more efficiently and effectively.
The Law Commission in its 186th Report suggested multi-faceted Courts with judicial and technical inputs referring to the practice of environmental Courts in Australia and New Zealand. As a result NGT was formed as a special fast-track, quasi-judicial body comprising of judges and environment experts to ensure expeditious disposal of cases.
The National Green Tribunal was established in 2010 under the National Green Tribunal Act 2010 as a statutory body. It was setup for effective and expeditious disposal of cases relating to environmental protection and conservation of forests and other natural resources. It also ensures enforcement of any legal right relating to environment and giving relief and compensation for damages to persons and property.

The Tribunal is mandated to make and endeavour for disposal of applications or appeals finally within 6 months of filing of the same. Initially, the NGT is proposed to be set up at five places of sittings and will follow circuit procedure for making itself more accessible. New Delhi is the Principal Place of Sitting of the Tribunal and Bhopal, Pune, Kolkata and Chennai shall be the other four place of sitting of the Tribunal.

Section 252 of the Income Tax Act, 1961 provides that the Central Government shall constitute an Appellate Tribunal consisting of many Judicial Members and Accountant members as it thinks fit to exercise the powers and functions conferred on the Tribunal by the Act.

The Finance Act of 2017 merged eight tribunals according to functional similarity. The list of the tribunals that have been merged are given below:

Some notable differences between a court and Administrative Tribunal are as follows –
Author: Chetana Shivale, ILS Law College, Pune.