A very prominent jurist William Blackstone said: “Better that ten guilty persons escape than that one innocent suffer.” The term ‘Wrongful Conviction’ refers to the state of being proved guilty. It is a judgment of guilt in a court of law. An individual can be wrongfully convicted due to a lot of reasons such as false confessions, eyewitness misidentification, improper forensics, etc. The only way by which these victims are released is via DNA exonerations. In the last few years, the rate of wrongful conviction has increased gradually. 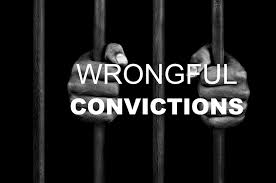 As per the studies it is stated that after an individual who was wrongfully convicted is released that individual suffers a great deal. He is a victim who faces a psychological, financial, emotional, social crisis. It also greatly affects his lifestyle as he has uncountable sleepless nights, haunting nightmares, anxiety, mistrust, etc. Most of the victims of wrongful confinement suffer from Post-Traumatic Stress Disorder (PTSD).

I personally feel that after an individual is wrongfully convicted that individual loses faith in the system of justice and is more prone to perform crimes. The convict is psychologically ill until proper care is taken off. But even after the convicted is released his life can never go back to normal as he will be haunted by the dreadful terrors of prison which he had to face without any fault on his part.
Reasons for Wrongful Conviction

Many big politicians, businessmen, etc. pay out a huge amount of cheques to the witnesses for making a false statement and hide the truth. Such false confessions result in the wrongful conviction of an individual whose entire life is brought to ashes.

Sometimes the eyewitnesses present at the spot of crime misidentify the criminal as someone else and the wrong individual is convicted. The eyewitnesses can not always be trusted as human memory can take leaps and at the same time functions wrongfully as well.

The only remedy available to the victims of wrongful conviction is that the judiciary grants monetary compensation or damages to the victims under Article 32 of the Constitution of India, 1949 and Article 226 of the Constitution of India, 1949. This is the reason these two articles are considered as the heart of our Indian Constitution without which thousands of individuals would suffer as their fundamental rights would have encroached.

In this case, the petitioner, Rudul Shah was illegally imprisoned for 14 years. A writ of habeas corpus was filed demanding his immediate release. The Supreme Court held that if by the wrongful act of the state any right of an individual is violated, then that individual will receive compensation and be granted a compensation of Rs. 30,000/-.

Ram Lakhan vs. the State of UP

In this case, an ISRO scientist was wrongfully accused of espionage. After a long legal battle of 24 years, the Supreme Court awarded Rs. 50 lakh as compensation to him. The fact that restitution was granted 24 years post the wrongful conviction significantly reminds the need to ‘rectify wrongdoings promptly’.

Hence, a proper and more systematic system of justice shall be created so that no innocent individual shall suffer wrongfully. Moreover, a proper compensation policy for victims of wrongful confinement shall also be formulated. There is a need for a uniform compensation legislative framework. Wrongful conviction not only affects the victim but also his family, and even after the convict’s release no amount of compensation can bring him the time, reputation, respect, etc. he has lost to his family and friends. Thus, before convicting an individual all the aspects shall be rechecked so that no individual’s future and life are doomed.