Banks are institutions that play a very major role in the lives of the people in our country. It performs a duo task that is to collect deposits and to provide loans in various forms.
Before the year 1969, all the banks in India were monitored by private entities and these banks had no government control over them. In those days there were approximately 700 banks that failed or liquidated their assets and closed. Thus, to bring the financial sector stability and to fulfill the development needs of India, the Government of India 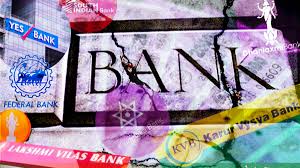 In the year 1969, the Government of India nationalised the topmost 14 commercial banks and then were monitored and controlled by the Government sector.
However, even after taking massive steps and formulating various schemes and policies, some banks are unable to pay back the money for their depositors which is a huge risk for a country’s economy. When a bank is unable to return the money of its depositors it is called bank failure and it shakes the country’s economy along with its citizens’ monetary conditions.

The PMC bank granted a loan of Rs. 2,500 crores to a real-estate company named Housing Development and Infrastructure Limited (HDIL). To give out such a huge amount of loan the bank gave out 70% of its depositors’ investments. To commit this fraud twenty-one thousand new fake bank accounts were created to portray that the loans have been granted to different individuals and not a single company.

When some of the women employees of the bank became aware of the happening of such fraud then they made an effort to inform the Reserve Bank of India (RBI). the information of fraud reached its depositors and there was a lot of chaos due to panic withdrawals from the bank.

So, later, the director of the bank, Mr. Waryam Singh had to accept and confess to this fraud as the liquid money in the bank was given out as a loan and people wanted to withdraw their deposits which the bank lacked in providing.
The promoters of Housing Development and Infrastructure Limited (HDIL), Rakesh Wadhawan, and Sarang Wadhawan were arrested and the director of PMC Bank, Mr. Waryam Singh was convicted for the criminal act of cheating.

At one point in time, Yes bank was India’s fastest and fourth-largest bank. This bank’s growth rate was very high and efficient. This bank had such a high growth rate as like other banks it did not target the retail customers, and local men but made a move to focus on the big corporate bodies such as PhonePe, BharatPe, Instamojo, etc.

This bank faced a downfall when the Reserve Bank of India (RBI) noticed that there is more than Rs. 3000 crore difference between the Non-performing assets (NPA’s) that Yes Bank is revealing and the actual Non-performing assets (NPA’s). The reason behind so many defaults in loans was that this bank gave out loans to those companies whose creditworthiness was not accurate like Anil Ambani Group, etc.

When the under-reporting of actual Non-performing assets (NPA’s) came to the knowledge of the Reserve Bank of India (RBI) it removed Rana Kapoor, the CEO of Yes Bank. But even after firing the CEO of Yes bank, there were loads of governance issues and as the number of Non-performing assets (NPA’s) was huge the bank was not in a position to receive funding from any source.

For a long time, the Lakshmi Vilas Bank has been consistently facing problems such as bad governance, no profit, and an increase in Non-performing assets (NPA’s). In the year 2017, this bank started facing huge problems when they granted a loan of Rs. 720 crores to then the promoters of Ranbaxy, Shivinder Singh, and Malvinder Singh, and this loan transfer was investigated.

Later, the information which came forward was that the Lakshmi Vilas Bank gave away the deposits Religare Finvest Limited to the promoters of Ranbaxy, Shivinder Singh, and Malvinder Singh in their personal capacity. Moreover, the bank also misused the public funds deposited into the bank.

Due to such issues, the Reserve Bank of India (RBI) merged this bank with a foreign bank named DBS and placed a moratorium which means that the bank cannot give out any loans for a period of 30days and no depositor can withdraw more than Rs. 25,000/-

The primary reason for bank failures is that banks give out huge amounts of loans recklessly without evaluating the creditworthiness of the entities, or evaluating the bank’s self-liquidating position.

The banks which solely focus on the big corporate entities without targeting the local men and retail customers generally end up granting loans of huge amounts and lose their liquidity value as the big corporates are sometimes unable to repay loans and were declared insolvent for which the Indian banks suffered the most.

When a bank gives out a loan to an entity or an individual who is unable to pay back the loan even after 90 days then that entity or individual is declared as a Non-performing asset (NPA’s). When the Non-performing assets (NPA’s) of a bank increases it is regarded as it is failing and vice-versa. When huge amounts of loans are given to big entities and those entities are unable to repay the loan amount they become NPA and the banks suffer indefinitely.

Hence, the Reserve Bank of India (RBI) has always tried to be a regulator and supervisor for the banks in India. Over the years the banking system in India has changed drastically. After the bank nationalisation in 1969, 14 big commercial banks were nationalised and many regulations were imposed to help them function properly.

But in the last two years, we have seen how 3 major banks in India were under the RBI radar due to bad governance and poor management.