In this article , author discusses about the concept of caste , origin of caste, caste as ‘system’ ,then author tries to scrutinize the reservation policy in India from the perspective of caste, pros and cons of so called positive discrimination, the two most important question upon which author focuses is – should caste system and reservation policy will go hand in hand in future , or will there be any positive attempt in making India reservation free? Is reservation policy right approach to end segregation in society? 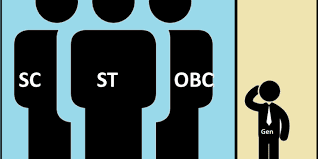 Concept of Caste and Origin of Caste System-

Work division was based on this belief system only ,i.e. anyone from Brahmins caste can give and take education , in society Brahmins are next to god in the way people from lower caste used to follow the sorcerous act as depicted by them , they were the major command in society even for Kshatriyas and Vaishyas as role of Kshatriyas was associated with ruling of the province so in order to conquer over others provinces they used to follow the tactics of Brahmins , Brahmins also used to act as a judge in civil and criminal cases . working of vaishyas were associated to agriculture, lending of money , trading , whereas there was no particular working assigned to sudras except to serve above three higher caste , mainly sudras worked as bounded labors , had no access to education and they were given only sustenance salary ,so that they can only survive and work. The main castes were further divided into about 3,000 castes and 25,000 sub-castes, each based on their specific occupation. Outside of this Hindu caste system were the achhoots – the Dalits or the untouchables[ii]. Dalits are the people who were denied access to live even with in society so they used to live outside the society; they were treated as impure and excluded from four fold Varna system.
Now it becomes more important to understand the analogy between jati (caste) and Varna. Varna and jati are the different units of social organization as concept of Varna was based on theoretical conception on occupation but in Indian context caste and class in India are intervened/overlap. It has been said class is based was totally based on structure while caste was totally cultural and within the family ‘kul’[iii].

Rationale Behind Caste Based Reservation-

British really knocked caste system for six and had putted feet up after introducing caste based reservation policy in India. As we have seen earlier that lower caste people were more oppressed and denied basic human rights , respect and dignity ,whereas people of higher caste became despotic and were unapologetic in terms of sanctioning lower caste people.

Lower class people were regarded as evil to society as they were usually associated with crime, robbery and plunder which lead to backwardness of people belonging to lower caste. society was changing as dark age ,industrialization, enlightenment age and then modern age changed the whole thinking process , in modern age focus was laid down on preservation of human rights, upliftment of backwardness (economic, social and political), education .
View of people towards backward caste has still not been changed as several of cases can be seen on daily basis on caste discrimination. There was a case where upper class people objected to the Dalit groom sitting on the horse and pelted stone[iv] , people of lower caste cannot share food , even cannot sit before upper caste people , ironically Shri Ramnath Kovid who is a president of India was denied entry to visit temple[v], so need of reservation was felt in order to assure equality , dignity to lower caste people, Often criticized for being unjust and regressive, it remained virtually unchanged for centuries, trapping people into fixed social orders from which it was impossible to escape. B.R AMBEDKAR who authored the Indian constitution was a Dalit leader, and he worked for betterment and fought against discrimination prevalent against lower caste people. The approach of reservations is being utilized as a system to conquer segregation and go about as a compensatory work out[vi].

Constitution and Pros and Cons of Positive Discrimination-

Indian constitution provisions ban practice of discrimination on the basis of age, sex, caste, religion, or place of birth under article 15. Our Constitution ensures equity and fairness of chance to everyone and so it turns into an obligation of state to make a move to accomplish this goal. Constitution also recognizes that equal opportunity means competition between equals and not unequals. Article 341 of the Indian Constitution designates certain disadvantaged tribal and caste populations as Scheduled Castes and Tribes. The Constitution directs that “… the state shall promote with special care the education and economic interests of the weaker sections of people, and in particular, of the scheduled castes and scheduled tribes and shall protect them from social injustice and all forms of exploitation.”[vii] DR. B.R AMBEDKAR IN HIS undelivered speech “Annihilation of caste” focused upon abolition of untouchability , he also said out casted people can only be respected if whole caste system get abolished .

Politics plays very important role in making a society evil and crime free but stratification on the basic of caste is within the roots of Indian politics. Political parties demands votes on the basic of caste, for example, in Uttarpardesh yadav’s (obc) are in majority so samajwadi party gets maximum percentage of votes from yadavs only , same equation applies to bahujan samaj party , they cover all Dalit votes, but the time is changing ,

India is secular in many terms not just in religion, as we have also article 18 in Indian constitution which abolished the conferring and recognition of titles, now a days people are voting on development and growth rather than just mere on caste basis which is a positive sign for any country . Now if we see global view of reservation policy , the main object was to provide basic human rights and assuring dignity to backward classes which has not fulfilled and not to forget the most important aim was to provide level playing field to scheduled caste, scheduled tribe, and other backward classes by positive discrimination.
Somehow political parties have maligned the basic object to provide reservation as it questions meritocracy of the country. We cannot afford to uplift the backward at the sake of merit being a developing country and also we have taken economic status as a deciding factor for assuring dignity in society which is again out of the box as in reality it is not working, now there are backward class people in every sector i.e. private and public, living dignified life, we as a country are still giving them reservation , it questions why should the present youth generation be the victim of past tragedy over dalits and untouchables , now a days intercaste marriages are prevalent in society , people makes friends without falling into the caste theory , we are now concentrated towards artificial intelligence , nuclear energy, space technology where there is no time to look into the caste system . Author feels this is the right time to say good bye to caste based reservation policy , as it will bring equal treatment to equals and unequal treatment to unequals .
Author feels reservation system is positive up to an extent , it is not exploited. There should be reservation only on one basis i.e. vulnerability as we are two much concentrated in caste that we do not bother if someone is sleeping on footpath is human, so in conclusion author says that we need to see things from broader perspective , for him equal playing field is no reservation to no one and for that we as a country need to work upon. There should be proper demarcation between privileged and unprivileged , rather than in between ‘Thakur’ and ‘chaamar’ as now a days government have proper plans and policies for upliftment of poor, unhealthy and needy ,the part where we are lacking is proper implementation due to various reasons. Now author throws some light on second question as mentioned in introductory part, he says reservation policy is not helping positively with the segregation of caste part, so what else we can do is that we can have commission at every level who will spread awareness about social evils as many poor people do not aware of their rights and duties ,they think whatever they are doing and into is punishment of previous birth. Author concludes on high note that India without reservation will be India we dream for.
[i] https://www.bbc.com/news/world-asia-india-35650616.
[ii] https://www.bbc.com/news/world-asia-india-35650616.
[iii]https://journals.sagepub.com/doi/abs/10.1177/0038022919840101?journalCode=soba#:~:text=Caste%20and%20%2D%20class%20are%20polar,its%20members%2C%20whereas%20class%20is.
[iv] https://www.indiatvnews.com/news/india/gujarat-upper-caste-men-object-dalit-groom-on-horseback-throw-stones-589556.
[v] https://www.brut.media/in/news/this-temple-briefly-denied-entry-to-the-president-of-india-5ddd1ec0-b988-4473-b062-ccdae60161ab.
[vi] http://www.legalserviceindia.com/legal/article-458-the-need-for-review-of-the-caste-based-reservation-system-in-india.html.
[vii] https://shodhganga.inflibnet.ac.in/bitstream/10603/104217/13/13_chapter5.pdf.
Image Sorce
This blog Is authored by Harsh Gupta, student at Hamdard Institue of Legal Studies and Research , Jamia Hamdard University.