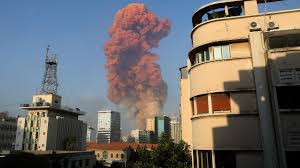 While the world is already suffering from a health crisis that is spreading like a wildfire, the capital of Lebanon i.e. Beirut received a final blow on its economy due to a port explosion on 4th August 2020. The explosion which claimed several lives and injured many others was easily avoidable if the country did not allow red-tapism and corruption to over-power it. The economic and health crisis in Lebanon has further deepened due to a chain of resignations that have followed right after the explosion, thus disturbing its political stability as well.

Lebanon has suffered from various crises in its past as well, the economy is still affected by the impact of the Syrian Crisis, wherein in 2011 the about “1.5 million Syrians took refuge in Lebanon”[i]; this has strained a huge amount of public finance and the environment of the country. This has further proved to increase the economic divide and poverty in the country. The GDP growth rate of the country has also been falling, the GDP growth rate in 2017 was 0.851 % which was reduced to -1.926% in 2018 and -5.637 in 2019[ii]. This depicts the poor state that the economy exists in.

The economy had also suffered from a devaluation of its currency in October 2019, wherein the currency lost around “85% of its value since the eruption of the anti-government protests.”[iii] The middle-class population is the one that was hit the hardest as even the everyday commodity like food, laundry detergent, etc. became unaffordable. The economy was already suffering from a downfall and then came COVID-19 and the explosion which proved to be a final nail in the coffin of the economy.

On 4th August 2020, the Lebanese witnessed a port explosion that was caused due to a blast of “2,750 tonnes of ammonium nitrate”[iv] which was unsafely stored in a warehouse since 2013. The blast has claimed around 200 lives and has injured approximately 5000 people; it has also caused huge damage to properties and the environment of the country. The blast was so huge that it was heard 200 km across the sea in Cyprus as well. It has further been compared as “equivalent to a 3.3 magnitude earthquake” [v].

With hundreds of lives lost and thousands of people injured the economy is suffering from another severe health crisis apart from COVID-19. The capital was already finding it difficult to overcome the effects of COVID-19 and to accommodate the increasing number of positive patients. After the explosion, the hospitals started facing a huge shortage of medical supplies and ventilators. There was a huge amount of hue and cry and the aftermaths of the same have been proved to have a very negative impact on the country.

The Effect of the Explosion on the Economy

The port which used to be “Lebanon’s largest maritime gateway”[vi] has been badly damaged thus affecting the supplies of the import-dependent country. The country was already dealing with economic turmoil before the blast and that has further deepened due to the unfortunate event. The country is facing a huge shortage of essential commodities and a breadline is visible. The government resigned after the incident, this has also pointed out the political disequilibrium and the need for conducting an election.

While more than half the country’s population was already predicted to fall into poverty this year, the number seems to be increasing due to an unfortunate event that occurred. The same has led to a loss of livelihood and shelter on a large number. In the year 2020, the Lebanese Food Bank has distributed around six times the number of food boxes that they used to distribute in 2019[vii], this is sure to be increased after the catastrophe.

The blast was caused due to fault on the part of the government thus increasing the pressure of restorative justice. Carrying out such an activity would require a huge amount of finance, which other countries won’t be keen to lend seeing its failing economy and due to Iran-backed candidates in the Lebanese government. This leads the country to depend upon the IMF and to adopt the suggestions that would be provided by the International Organisation.

The International Monetary Fund (IMF) managing director, Ms. Kristalina Georgieva had issued a statement[viii] on 9th August wherein she pointed out the need of the policymakers to stand together and address the ongoing crisis. The statement also pointed out the reforms that would be needed to help Lebanon get back on its feet. The first and foremost need is to restore the solvency of the financial system; secondly, temporary safeguards should be established to control the capital outflow; thirdly, the need of more transparency, accountability and comprehensive audits has also been pointed out; lastly, social safety nets have to be established to protect the most vulnerable people of the society.

All of these would somehow help to unlock huge capital assistance for the economy, but the question that arises at the end of the day is whether the economy is willing to make the necessary reforms and whether it would be in a position to repay the debts after coming out of the health crisis. At such a point of time, it becomes very necessary that the policy maker’s stand together and the government are intact, but Lebanon has a shortcoming in the same as well. Furthermore, the forecasted GDP growth rate could now shrink even more and this would make it more difficult for the country to stand back on its own feet.

Life for the Lebanese citizens was already difficult due to the falling economy and increasing power outage. Then the catastrophe hit which aggravated the existing problems, this blast has affected the “economic arteries” of the country I.e. the port of Beirut. The present situation in Beirut has sent the country towards a deep end and has proved to be an epitome of the need for a country to be self-sufficient as well as the need for having a stable government. Though Lebanon has never been a stranger to such catastrophes we are yet to see how the country gets out of the multi-faceted crisis that has struck it.

[i] The World Bank in Lebanon Overview, The World Bank, https://www.worldbank.org/en/country/lebanon/overview (last accessed on Aug. 16, 2020).