In the increasing rate of COVID cases in the country and all over the world, it is important to have the knowledge of stubble burning practice and its impact on the environment as a whole. Likewise, we should also look into the fact of why it is necessary to cease the practice of stubble burning with the help of environmental laws which governs the impact of such practice. It is very much important to make the decision to continue the practice or not by analyzing the persisting conditions in the surrounding atmosphere or the society and the impacts of the practice on the same. 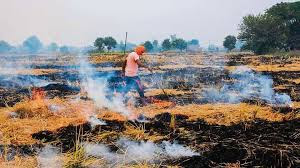 WHAT IS STUBBLE BURNING AND HOW DOES IT AFFECT THE ENVIRONMENT?

Stubble burning in India is a practice followed by farmers mainly in Punjab and Haryana in late September and October each year. An estimate of 35 million tons of crop waste is burnt from their paddy fields after harvesting. This is done as a low-cost straw disposal practice to reduce the turnaround time between harvesting and sowing for the second (winter) crop.

This has harmful consequences on the environment. It includes; loss of soil fertility, increase in the rate of air pollution, increased dependency on chemical fertilizers, which in turn deteriorates the quality health of people. It also causes ozone layer depletion, allowing the harmful UV radiations to enter through atmosphere layers of earth, increasing the rate of skin diseases and cancer among the people. This in turn leads to global warming resulting in increase in sea level, making earth a non-suitable place for people to live in. Increase in air pollution will make the air non-suitable for breathing. This can increase the rate of respiratory diseases in each individual such as pneumonia, asthma, bronchitis, lung cancer etc. It contributes to 40- 45% of the prevailing air pollution in Delhi; which is one of the city in India popularly known for its high rate of pollution.

THE ENVIRONMENTAL LAWS WHICH PREVENT THE PRACTICE OF STUBBLE BURNING

Based on the impact stubble burning has on the environment and lives of people, the following are some of the acts, laws and case laws which adds on to the disadvantage of stubble burning practice:
Article 21 of the constitution of India gives the citizens the fundamental right to life and liberty. When the such practice like stubble burning causes harmful health effects among the people of the country due to increased air pollution, increases rate of global warming, increased rate of skin diseases due to ozone layer depletion, such practices violate the fundamental right to life of the people of the country. “Right to breathe clean air” and “Right to get pure drinking water” is the fundamental right of each and every citizen of India. It is a fundamental right enshrined in Article 21 of the constitution of India and this is the duty of the state and central government to protect the rights of its citizens.

Along with this when stubble burning is practiced for a long time, the fertility of the soil is lost; due to which use of chemical fertilizers become necessary. This cause soil contamination which violates some of the environmental acts, laws and legislations laid down in Indian governments. In India, Hazardous Wastes (Management, Handling and Transboundary) Rules, 2008, brought out a guide for manufacture, storage and import of hazardous chemicals and for management of hazardous wastes. This would provide guidelines on why such chemical fertilizers should be used and even though it is used what measures have to be taken while doing so.

When such chemicals are washed away from land due to rain, it adds on to the prevailing water pollution. Thus, prevents the people from getting pure water to drink. The Water (Prevention and Control of Pollution) Act, 1974 prohibits the discharge of pollutants into water bodies beyond a given standard and lays down penalties for non-compliance. At the Centre, the Water Act has set up the CPCB which lays down standards for the prevention and control of water pollution. At the State level, SPCBs function under the direction of the CPCB and the State Government. Thus, this act prohibits the usage of chemical fertilizers which contaminate the soil. Thus, it becomes a necessary to stop such practice of stubble burning which increase our dependency on chemical fertilizers.

The burning of the left-out crops releases a lot of carbon dioxide into the atmosphere. This increase the greenhouse gases in the atmosphere which results in air pollution, ozone layer depletion, global warming and so on. This makes the air not suitable for people to breathe. The Air (Prevention and Control of Pollution) Act, 1981 (the “Air Act”) is an act to provide for the prevention, control and abatement of air pollution and for the establishment of Boards at the Central and State levels with a view to carrying out the aforesaid purposes. It seeks to combat air pollution by prohibiting the use of polluting fuels and substances, as well as by regulating appliances that give rise to air pollution. Stubble burning dive rise to air pollution, thus the practice is against the above-mentioned act norms.

The Apex Court in Damodar Rao v. S.O. Municipal Corporation [AIR 1987 AP 171] held that the environmental pollution and activities which is slowly polluting the environment and atmosphere will also be considered as violating Article 21 of the constitution of India. This implies the practice of stubble burning violates fundamental right to life. In the case Dehradun vs. State of Uttar Pradesh [AIR 1987 SC 2187], it was stated that the permanent assets should not be exhausted in one generation making it unavailable for the subsequent generations and the natural resources should be utilized with requisite care and attention so that the ecology, environment, biodiversity and mankind may not be affected in a serious way. This clearly discourages the practice of stubble burning which gradually causes loss of soil fertility. This soil fertility is a natural resource which should not be exhausted. If exhausted, it will have serious impact on the environment as well as on the mankind.

In this pandemic situation it is highly recommended to stop this practice in the view of welfare of health of people. It is said that the COVID patients who have other respiratory ailments are seriously at risk and have high chances of losing their life, in such a situation there has to be serious measures taken to prevent such practices which increases respiratory problems in people and which in turn reduces the immunity system of such people. Having high immunity is also an important factor in order to get rid of the infected corona virus. Thus, the practice of stubble burning has to be stopped in this pandemic situation as it causes threat to the lives of citizens and thus violate their basic fundamental right, i.e. right to life according to Article 21 of the Constitution of India. In order to make our mother earth suitable to live for our subsequent generation, such practices have to be stopped.