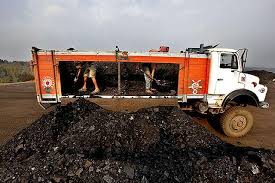 These coal reserves are usually found in the eastern region of India, i.e. Telangana, Jharkhand, Chhattisgarh, West Bengal, and majorly in the northeastern states that are Meghalaya and Assam. In spite of the presence of the coal mines in these northeastern states, commercial mining is not practiced. This is because of the terrain’s unsuitability and the nature of coal deposits. Moreover, the coal present in these mines contains a lot of sulphur which reduced the energy efficiency, and therefore this type of coal is known as the bad quality of coal.

In rat hole mining a small tunnel of about 3-4 feet is dug in which usually children and extract the coal. This rat hole mining can be categorized into two types: Side cutting and box cutting.

This bad quality of coal and the coal mines are often seen as a treasure chest. Places, where there is unemployment, loss of livelihood, and poverty, and the people, get engaged in these mines as labours to earn their bread at the cost of their lives. As these mines are hardly 3-4 feet deep, children are employed as labourers here because of their thin body shape and small body size and therefore it becomes easy for the extraction. This mining is very much prevalent in Meghalaya. In Meghalaya, there is only hilly terrain, which makes it very difficult to extract the coal from the mines through proper commercial mining. Commercial mining demands proper big tunnels with pillars and support, which requires a good sum of money, therefore the investors and the miners find rat hole mining easy as it calls for less investment and gives out good returns. This is a reason why people have been attracted to this type of dangerous mining business.

The National Green Tribunal in India in 2014 had banned this rat hole mining of coal and the transportation of the same. The reason for banning such practice was the concern for the environment and the conditions of labourers in the tribal states like Meghalaya.

Rathole mining is considered to be an unscientific practice to extract coal. As already mentioned, narrow and small tunnels are dug in the ground. This kind of mining pollutes the river. It also results in deforestation and also disrupts the traditional values of society. This extraction of coal is linked to the rights of many indigenous communities. The ban imposed by the NGT was resented and challenged by many.

After all these years of practicing rat hole mining, the biggest challenge is to restore the environmentally degraded regions and also rehabilitate the labour that has been exploited.

The petition to ban this rat hole mining was first filed by the Assam-based All Dimasa Students’ Union and the Dima Hasao District Committee after which the ban was imposed by the National Green Tribunal. The Student Union complained about the rat hole mining in the Jaintia Hills of Meghalaya due to the Kopili River has tuned acidic which flows from Meghalaya to downstream Assam. The NGT’s observation was also reflected in the reports made by the Comptroller and Auditor- General (CAG) in the year in which the ban was imposed i.e. 2014. The reports clearly indicated the damage to the kopili hydroelectric project because of the acidic discharge from the rat-hole mines. [1]

Rat-hole mining kills the environment. It harms the caves, the rivers, and aquatic life. It pollutes and deteriorates the environment wherever it has been practiced. The coal stockpiles and the mines are there in the entire state but it is highly concentrated in the Jaintia hills. Meghalaya has always been the adobe of clouds and all greenery everywhere. But now its black dust and ash are present everywhere. The river flowing down the Meghalaya and Assam is rusty orange. The rivers have been a serious victim of this rat hole mining in Meghalaya.

The reason behind the dirty rivers is the increase in the acidity of the rivers when the water flows along with the sulfur-rich coal which degrades the quality of the water and harms the biodiversity in the mining area. The cause of the acidic seepage is the active and abandoned mines, overburden rock, and coal storage sites. The signs of this seepage can be clearly seen in the reddish-orange and brown colors in the river in the mining areas of Meghalaya. The water gets even more polluted with the leaching of heavy metals, organic enrichment, and silt. These rivers flow down to the flood plains of the neighboring Country.

Off-road movements of the trucks also cause harm to the environment. Due to the rat hole mining during the rainy season, water floods inside these mines which cause the death of many workers because of suffocation. Once water gets in the mines, the workers can only come out when the water is drawn out from the mines.

It was in December 2018, when one of the coal mines collapsed in Meghalaya’s East Jaintia hills, which trapped around 15 workers and were still missing. They are feared dead. This incident threw the spotlight on the rat hole mining in the state of Meghalaya. [2]

Meghalaya in totality has a coal reserve of around 559 million tonnes which is spread over an area that seems to be a little larger than Kolkata city. Whenever there is mining, deforestation has to happen and when it rains heavily in Meghalaya it results in heavy soil erosion. The soil that is eroded finds its way into the caves and chokes the passage. All the rainwater turns acidic and it drains the coal mines and then moves into the caves which are habitats to exotic and endemic life forms. The small streams and rivers have turned seasonal or have disappeared. The water in these rivers and streams disappears into the mines and caves which results in the shortage of clean drinking water in the hills of Jaintia.

India’s National Green Tribunal banned the rat hole mining and transportation of coal in Meghalaya due to the issues of environment and labour but it permitted transportation of already extracted coal which was lying in the open sites.

It is under the sixth schedule of the Indian Constitution that states the tribal communities residing in the state of Meghalaya have exclusive rights over their land which even includes freedom of mining. The ban on mining has evoked large protest by the coal miners and the transport workers baked by the political parties in order to oppose the ban.

On the other hand, the state of Meghalaya’s own policy on Mining, Meghalaya Mines and Mineral Policy (2012) does not mention rat hole mining as its traditional form of mining which is beyond the intervention of the state in the 7.6 clauses that small and traditional system of mining by the local residing in the state shall not be unnecessarily disturbed. [3]

It has been always been observed that a few private individuals who are mainly profit-oriented often convert their wrongs into rights by seeking help from the sixth schedule of the constitution. The current mining in Meghalaya was the misuse of the constitutional provision. These private individuals who are profit-oriented try to legitimize their act of mining in Meghalaya by claiming immunity through the autonomy of the tribal over the land ownership. In the coming future, it is expected that this controversy of rat hole mining will eventually increase. And in order to solve this problem of the dehumanizing practice of rat-hole mining, the state, and the central government will have to come together. [4]