Are there laws for stalking in India? Stalking is an act that is often dismissed as a harmless and innocent act, but it is an alarming and harrowing situation for the victim. It is the victim who ultimately has to bear the brunt, move to a different place, change jobs, and sometimes even their identity to evade the stalker. 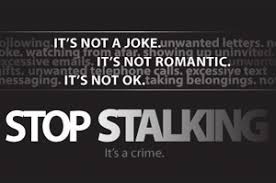 In 2018, 9,438 cases of stalking – one every 55 minutes, on average – were reported in India, as per the National Crime Records Bureau report released in January[1], which is almost double the number of cases as reported in 2014. The number of stalking cases reported has been increasing – 6,266 in 2015, 7,190 in 2016 and 8,145 in 2017. The crime rate has increased from 0.8 in 2014 to 1.5 in 2018. Though more cases of stalking and sexual harassment are being reported, it is likely they are being under-reported. Also, most accused keep harassing the victim even more to withdraw their complaint filed against them.
Stalking is much more widespread than most people think, particularly the social justice experts. This underlines the fact that stalking is an important policy issue for the criminal justice system, for organizations offering care to victims of abuse, and for activists dealing with violence against women.

Stalking has become very common in today’s world, that makes people wonder if there are laws for something as common as this. The reason why such an act is claimed to be common is that it is happening at every corner of the world every minute. The number of cases of stalking are increasing day by day which at the same times makes it more dangerous.
There are some laws regarding stalking and abusing women through such acts in India under the Indian Penal Code, 1860. They are:
1. Section. 354 D – Stalking [2]: “(1) Any man who— i. follows a woman and contacts, or attempts to contact such woman to foster personal interaction repeatedly despite a clear indication of disinterest by such woman; or monitors the use by a woman of the internet, email or any other form of electronic communication commits the offence of stalking;..”
The section was added by Criminal Law (Amendment) Act 2013 post Delhi gang-rape case. This section takes into account both, the physical stalking and cyber stalking. A man is said to have committed stalking if he follows a woman and contacts or attempts to do so to foster personal interactions after she clearly and repeatedly indicates her displeasure.[3] The section clearly mentions that if anyone tries to monitor the activities of a woman on internet, it will amount to stalking. Thus, if the stalker indulges in any of the activities defined in the section, he shall be guilty of the offence under this provision.
2. Section 509 of IPC, relates to the modesty of women, reads as follows: “Word, gesture or act intended to insult the modesty of a woman.—Whoever, intending to insult the modesty of any woman, utters any word, makes any sound or gesture, or exhibits any object, intending that such word or sound shall be heard, or that such gesture or object shall be seen, by such woman, or intrudes upon the privacy of such woman, shall be punished…”
The essential ingredients to be proven under this section are:
Such an act if done, a person shall be guilty under Sec.509 and shall be punished with 3 years of imprisonment and fine.
Some drawbacks under these sections are as:
3. Section 292 of IPC defines “obscenity”. The offence of cyberstalking takes within its purview the act of sending obscene materials to the victim on a social networking site or through emails or messages etc. Where the stalker attempts to deprave the other person by sending any obscene material on internet with the intention that the other person would read, see or hear the content of such material then he shall be guilty of the offense under Section 292 of Indian Penal Code.
4. Section 507 of IPC relates to “criminal intimidation by anonymous communication.” This section states that where the stalker tries to hide his identity so that the victim remains unaware of the source from where the threat comes, it amounts to an offence. Thus, it ensures the very characteristic of cyberstalking i.e., anonymous identity is blocked. The stalker shall be guilty under this section if he attempts to conceal his/her identity.
5. Section 67 of Information Technology Act[4] : This section relates to publishing obscene material in “electronic form”. If a person tries to publish any obscene material about the victim on social media i.e., in electronic form so as to bully the victim, he shall be punished with an imprisonment extending up to three years and fine for the first conviction and up to five years and fine for the second conviction.
6. Section 67A[5] has developed a special category of material called ‘sexually explicit act.’ Publishing, distributing or allowing any information to be distributed is punishable by imprisonment for the first conviction up to five years and a sentence of up to seven years and a fine for the second conviction.

WHAT ARE THE DEFECTS IN THE LEGAL SYSTEM WITH RESPECT TO STALKING LAWS?

There is a major drawback when it comes to enforcing such laws. One of the reasons for omitting these cases is a lack of understanding of the law by the police officers. Lack of understanding of the law can also be blamed on movies and TV shows for normalizing and romanticizing stalking. These play an important role, as they affect the psyche of a person and makes them think that it is a normal act of showing love. This toxic culture now pervades our society and inevitably affects our perception of the offence itself.
A sad reality is that sometimes victims are asked to ignore such cases while registering a case. The crime is normalised & trivialized by such statements and the seriousness of this crime is not seen. Victims are told to ignore it instead of taking strict action against the accused, they are blamed and commented upon and even complaints are not registered.

Some measures that can be taken in this regard are
1. The trial must be time bound and the trial must be done quick in order to ensure that the victim is not harmed further. Also, it may lead to an increased conviction rate if the accused is left free to roam.
2. The offence should be made non-bailable for first-time offenders too. This measure must be put in place as cases of stalking can turn into more severe/ heinous offences when the offender roams free. When it comes to stalking, the psyche, intention and mental state of the accused has to be taken note to make sure such offences are not repeated.
3. Complaints made possible through an online or telephonic medium. The government should create a national helpline number for reporting such crimes. It should also be backed by a quick response team of police officials in each city for providing immediate help in cases of emergency so as to help prevent such crimes.
4. Lack of an exclusive machinery to deal with stalking cases, has been argued as the primary reason for paucity of impact of the present laws.
5. The laws should be made neutrally for both men and women.
Additionally, there is fear instilled in the victim’s mind about registering a complaint with the law enforcement authorities due to lack of sensitisation and empathy shown towards the victim.

Stalking laws are relatively young laws which are still unknown to the majority. It is of utmost importance that people must be educated about such laws so that it helps them deal with and tackle such situations. It helps them while dealing with such an issue. There has to an end against such crimes against people, especially women and its seriousness has to be acknowledged if we are to create a rule of the law society. A stalked victim is not only mentally harassed, but also physically harassed, teased and a woman may also be outraged with her modesty. Although IPC provides for a provision for Stalking, it does not clarify anything regarding cyberstalking. The laws must also be amended to keep up with the evolving terms. After all, the well-being of a law depends upon the use of it by the people.
This article is authored by R.Sumedha.
REFERENCES :

10 thoughts on “STALKING LAWS IN INDIA”