“Change your mind, the Country will change”. 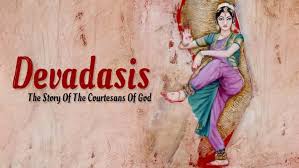 Sociologists and historians have widely analysed the treatment of women under the caste system and it has been witnessed in the Indian history of India that the caste system not only talks about the social division of peoples, it also includes it’s sexual division as well. The concept of endogamy have been seen as a mechanism of recruiting and retaining control over the labor and the sexuality of women. The concept of “Purity” and “Pollution” separate groups and also regulate the mobility of women. The females of lower caste were exploited on the basis of their caste and gender for social evils such as dowry practice, child marriage, Devadasi etc. In these, Devadasi is a social stigma, to a greater extent which is mostly adopted among lower castes in India.

Devadasi has also became an important part, when the socio-economic, religious and emotional reasons which are associated with female prostitution are explored. The topic of female prostitution gives contemporary discourses about devadasi girls and young women in India. Today, most devadasis practice sex work in a small lodge and brothel in their homes or in rural dwellings.

is commonly known that in ancient India, Devdasi practice was treated as holy practice with the greater aim to serve the divinity by unmarried and young women. As with the change of time, the concept of Devadasi have become prostitute by the upper caste communities. A Devadasi cannot belong to any one particular husband (as per the Indian concept ideas of marriage are that daughters are transferrable property which are gifted to husbands), instead that she is a common property. The Devadasi is a system of votive offering of girls to the dities in Brahmanic temples.

History of Devadasi system in India-

The actual inception of Devadasi system is obscure. The first known mention of the Devadasi system is of a girl named Amrapali who was declared as Nagarvadhu by the king during the time of Buddha. Many scholars have noted that the custom has no premise in scriptures. According to A.S. Altekar, The tradition of association of dancing girls with temples is unknown to Jataka literature. Greek writers does not mentioned about it, and the Arthashashtra, which talks about life of Ganik in detail, is also silent about it. It is said that in temples the tradition of female artists have developed during the 3rd century AD. Kalidasa who is a classical poet and Sanskrit writer of the Gupta Empire has given reference of such dancers in his Meghaduta. Xuanzang and Kalhana who are Chinese traveller and Kashmiri historian include their work as a medium of other sources. An inscription which is dated to the 11th century suggests that, in the Tanjore temple located in South India, There were 400 Devadasis attached to it. As similar, at the Someshwer shrine of Gujrat there were also 500 Devadasis. Devadasi had a high rank and dignity in society between the 6th and 13th centuries and they were also exceptionally affluent as they were seen as the protectors of the arts. During this period they usually get gifts from the royal patrons like land property and jewellery. Basically, the practice started with the great respect as the women who were chosen to be Devadasi were subject to two great honors first, because they were actually married to the god, they were to be treated as they were like Goddess Lakshmi herself, and second, they were honoured because they were considered to be “those great women who could submit themselves completely to god and could control human impulses and also their five senses”. Women were considered auspicious because they were married to an immortal.

They have some main duties, in addition to committing their life without marriage were simple as they have to take care of temple and learn Classical Indian dances, which mainly include the Bharatnatyam which they have to perform at temple rituals. At that time patrons were only considered to have higher status, so only they’ve ability to sponsor devadasis financially.

The honored status of davadasi began to ruined under British and Islamic rule. After their successful invasion of northern India, Islamic rulers began destroying entire Hindu temples. Once Hindu temples which were in the northern part of the subcontinent were destroyed, the devadasis, who were effectively bind to the temples, were left to fend for themselves. With the demolish of temples, devadasis have not only lost their protection, they’ve also lost their social status, which leads the beginning of their exploitation.

In India, Devadasi treated as a religious practice which is girls are offered to the dities in Hindu temple. This practice usually includes those girls who have not attain the age of puberty and they are required to sexually available for the community members. They believe that girls who are working as Devadasi, they take order from dities and serve it in the society. “The Devadasis are courtesans in God’s court”. Due to her belonging to divinity and sacred conditions, A devadasi cannot marry a particular person, as per the Indian concept ideas of marriage women are transferrable property gifted to husbands. Instead, she is the property of a deity who gives it to the whole community. If we understand this entire concept in a nutshell, then we can say that, “a Devadasi is a servant of God but wife of the whole city”.

Devadasi system is a religious practice in which girls are married and dedicated to the deity or to a temple and apart from this they are kept for performing rituals taking care of the temple, these women learned and practiced Sadir, Odissi and different classical Indian artistic traditions and enjoyed a high social status.

The devadasi system today is quite different from the historical practice in relation to both the expression and the underlying goals. Even today, this practice is in honor of a deity, in most cases yellamma. In its present form, this practice is no longer as temple worship or temple dancing, but is almost identical with gender trade, prostitution and exploitation of the lower caste. Still, According to the Indian National Commission for Women (NCW), India still has at least 44,000 active Devadasis, with the NCW also noting that the number may actually be as high as 2,50,000.  As the practice is underground it is not only difficult to confirm the number but also difficult to distinguish from non-religious prostitution, the practice is particularly concentrated in some states. According to NCW, most of the active devadasis are in Karnataka (22491 individuals), Andhra Pradesh (16624 individuals) and Maharashtra (2479 individuals).

The Madras Devadasis (Prevention of Dedication) Act also known as the Tamil Nadu Devadasis (Prevention of Dedication) Act or the Madras Devadasi Act. It is a law that was enacted on 9 October 1947 after India became independent from the British rule. The law was passed in the Madras Residency and gave Devadasis the right to marry and it was made illegal to dedicate girls to Hindu temples. The bill that became this act was known as Devadasi Abolition Bill.

Periyar E. V. Ramaswamy was involved in passing the Devadasi Abolition Bill but due to strong opposition from Devadasis in the Madras presidency, he suggested that the bill should be passed as a private bill not as a public bill.

Muthulakshmi Reddy proposed the Bill for the Madras Legislative Council in the early 1930s, but only on 9 October 1947 O.P. during the Congress-led government of Ramaswamy Reddyar (a.k.a. Omananda Reddy) was passed.

Some devadasis objected to the bill because they considered themselves as experienced and learned artists rather than sex workers. Because the Madras Devadasi Act was exclusive to the Devadasis, prostitution continued in South India until the Madras Anti-Devadasi Act was passed on 14 August 1956, especially along the coast in Andhra Pradesh. The Madras Devadasi Act is the important law passed in the presidencies and provinces of British India and following states and territories of India, which made prostitution illegal, including the Bombay Devadasi Protection Act of 1934, the Bombay Protection (Extension) Act of 1957, and  had made  1988 Andhra Pradesh Devadasi (Prohibition of dedication) Act.

Devadasi is a malpractice that has been going on since time immemorial.  Where the slogan of ‘Beti Bachao Beti Padhao’ is given in this country, it has just become a popular slogan. The country’s politicians often give such sermons. Assaults with these teenagers are not even recorded in many states where this tradition is followed. It is the hypocrisy of society that is considered here, where women are worshiped during the day and assaulted at night. Devadasis did not choose this custom for themselves; in it they are dragged into without their will. Thus the devadasi system is like a stigma on the sanctity of various traditions, customs or any rituals that are followed in India.

This article is authored by Divya Shree Nandini

43 thoughts on “Devadasi system in India”